Buona Beef Under Fire In Beverly After Clash With Union Picketers

By Howard Ludwig |&nbspAugust 18, 2017 8:42am
@howardaludwig
Twitter Facebook Email More
Members of the International Brotherhood of Electrical Workers, Local 134 distributed flyers Thursday outside of Buona Beef in Beverly. The restaurant chain has come under fire after a pair of videos surfaced that involved a confrontation with union members in Berwyn.
View Full Caption
Supplied Photo

BEVERLY — The Buona Beef franchise is doing damage control after a viral video showed members of the Buonavolanto family harassing union members and spraying protesters with a garden hose.

"F------ losers, dude," one of the Buonavolantos can be heard saying to union members in one of two viral videos captured outside the chain's west suburban restaurant.

The Buonavolantos were charged with battery in the incident after a picketer was struck on the hand, according to Crain's Chicago Business.

The Buonavolanto family, which founded the franchise more than 30 years ago, issued an apology for the behavior. Still, six members of the International Brotherhood of Electrical Workers, Local 134 stood outside Buona Beef's Beverly location Thursday at 10633 S. Western Ave. handing out flyers asking customers to, "Show Your Support — Please Do Not Patronize Buona Beef."

Donald Finn, business manager and financial secretary for IBEW, Local 134, was in Beverly Thursday and said he saw the video. He was shocked by the way the business owners handled themselves and believes the brothers were trying to intimidate union picketers.

"I just don't think there's any type of use for that stuff in this day and age," Finn said.

"You like to call names? You like to intimidate us, like you intimidate our guests?" one of the men from Buona Beef says in the video shot outside the Beverly restaurant.

Laurie Cairns, a spokeswoman for the Buona Companies, did not offer an explanation for the incident in Beverly, other than to say that the chain is "very meticulous about their landscaping."

As for the confrontation in Berwyn, Cairns said the Joseph and Jim Buonavolanto were washing away gasoline from that was spilled by union members operating a nearby generator. She also said the company is unclear on what the unions are specifically demanding.

"We just want them to pay a fair wage for the area," said Finn, whose flyers call out Buona Beef's hiring of SME Technologies.

Finn said it was the use of such non-union labor in Buona Beef's construction of new restaurants Downtown as well as in south suburban Frankfort, Homewood and Oak Lawn that initially drew the union pickets. But he also hopes that restaurant workers in the existing locations are being paid fairly.

Meanwhile, an employee at the Beverly Buona Beef stood near the entrance to the drive-thru handing out flyers Thursday that said the South Side location was built with 100 percent union labor and included a list of contractors.

Two large banners were also erected outside the Western Avenue location declaring the business' love of Beverly and dedication to union labor.

Employees in Beverly referred all questions to corporate executives, and this apology was posted on the chain's website Thursday:

"Members of our family did not uphold our values when responding to a union demonstration that disrupted our business. What started out as a peaceful discussion turned into an unprofessional exchange. This was an isolated incident that occurred in the heat of the moment. It is not representative of the way our family does business."

In the videos from Berwyn, the Joseph and Jim Buonavolanto knock down the union's signs and walk away with a handful of the union's flyers. In another video, the pair return to "clean the sidewalk," spraying water near the union members.

The heated exchange led by the Buonavoltanos also includes a picketer being mocked for a tattoo that reads, "Pride."

"If you worked hard, maybe you'd have a shot at being successful in life. Instead of being a f---ing thief," one of the two men can be heard saying in this video. 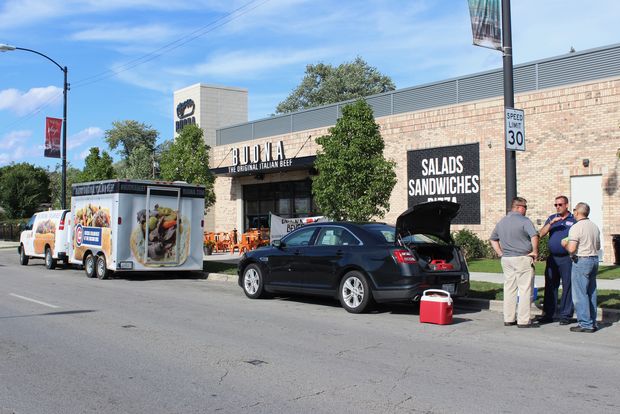 Union members packed up a giant, inflatable rat Thursday outside Buona Beef in Beverly. The picketers were upset by a viral video showing a confrontation between union members and executives of the chain. [DNAinfo/Howard A. Ludwig]

Other picketers in Beverly were suspicious of Buona Beef's catering truck and trailer being parked in front of the restaurant Thursday, blocking the area where they had previously set up their demonstration which included a large, inflatable rat (also known as Scabby).

In the wake of the incidents, the Facebook page Buona We've Gotta Beef was created. The viral videos out of Berwyn were also posted on several Beverly Facebook pages — home to many union members. Most of the comments supported the picketers.

Many commenters vowed to boycott Buona, including Jeannie of nearby Evergreen Park. She asked that her last name be withheld.

"I saw the video on my friend's page. I will not be going there as a patron ever again. They treated that man like a dog. It was disgusting," she said.

Buona Beef opened its Beverly location March 21, 2016. It was the chain's first Chicago restaurant and kicked off a five-year expansion plan for the chain. Cairns argued that union picketers have also acted aggressively towards customers since the pickets began.

Ald. Matt O'Shea (19th) said he was working to set up a meeting with union leaders and executives at the Buona Companies prior to the video being released. Since then, tensions have spiked.

"There is no excuse for what went on in that video," O'Shea said Friday afternoon.

He added that the Buona Beef in Beverly was indeed built with union workers. And he understands that the union's grievance with the company is with restaurants being built with non-union labor elsewhere. Still, he's eager for some sort of solution.

"My hope is that maybe next week as people have cooled down a bit, we can bring people together to try to talk this out," O'Shea said.