Weick, 85, of south suburban Chicago Ridge was the head wrestling coach at the school at 10001 S. Pulaski Road in Mount Greenwood. He previously coached wrestling for 18 years at rival Mount Carmel High School in Woodlawn.

"He had an ability to communicate with a kid from this generation or an adult from the previous generation. He knew how to reach them," Brother Rice assistant coach Jan Murzyn said.

Brother Rice's wrestling room was dedicated to Weick May 5, 2015. The ceremony included a visit from Donald Rumsfeld, the former Secretary of Defense under both President Gerald Ford and President George W. Bush.

Rumsfeld and Weick were both an accomplished high school wrestlers in Chicago at the same, though they were in different weight classes.

"His is a career that has touched the lives of so many young people," Rumsfeld said then of Weick. 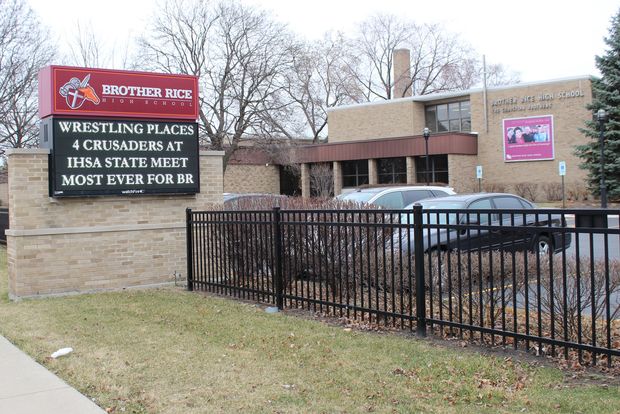 The sign outside of Brother Rice High School in February congratulated the school's wrestlers. Bill Weick had been the Mount Greenwood school's wrestling coach since 2004. [DNAinfo/Howard A. Ludwig]

Weick won the Illinois state title while at Tilden Tech High School in 1949. He went on to win two NCAA titles competing for the University of Northern Iowa in 1952 and 1955.

Weick competed nationally in Greco-Roman wrestling for several years before becoming a coach. He eventually joined the U.S. Olympic coaching staff and led the freestyle squad in 1972, 1980, 1984 and 1988.

While reminiscing on some of his career highlights in 2014, Weick recalled coaching the Junior World Championship Team on July 20, 1969. The competition was set amid the Cold War, and Weick's squad pulled off an upset victory.

"We beat the Russians 51 to 50," he said, noting that the unlikely win went largely unheralded as the competition was held on the same day as the Apollo 11 moon landing.

The coach with a cauliflower ear and firm handshake was elected into the National Wrestling Hall of Fame in 2007. He traveled to Cuba, Mongolia, Panama, Romania, Canada, Russia and France to coach wrestling. 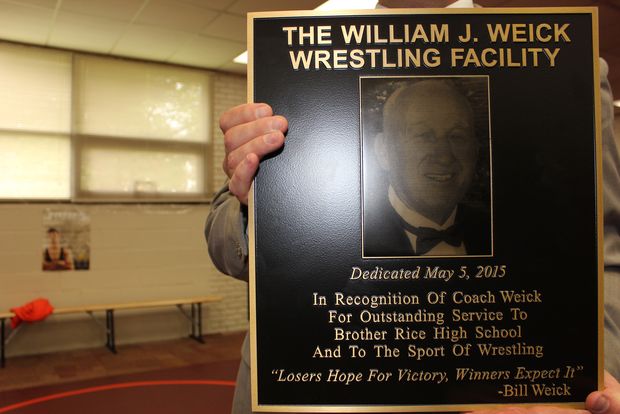 The wrestling room at Brother Rice High School was named for Coach Bill Weick May 5, 2015. The ceremony included a visit from Donald Rumsfeld, the former Secretary of Defense under both President Gerald Ford and President George W. Bush. [DNAinfo/Howard A. Ludwig]

He achieved national acclaim at Mount Carmel as well. Weick's teams won the state dual meet title three straight years beginning in 1992. He had 22 individual state champions during his tenure with the Caravan.

He was named the coach at Brother Rice in 2004. Weick had 41 qualifiers while there. In 2013, the Mount Greenwood high school had its first state champ, Rudy Yates.

Off the mat, Murzyn said Weick enjoyed the Illinois Lottery's Pick 4 games and had a knack for winning various pools. That said, he'll undoubtedly be remembered for what he helped his wrestlers accomplish.

"He was just able to motivate a kid in competition or in life," Murzyn said.

Saddened to hear of the passing of William J. Weick, inducted as a Distinguished Member in 2007. More about Bill https://t.co/CCHSYM9fTQ pic.twitter.com/Ty9POfu2Zt

Hall of Fame coach and wrestling legend Bill Weick has passed away at age 85 https://t.co/tkACAnFXmJ pic.twitter.com/dznz73CUZw