By Howard Ludwig |&nbspAugust 15, 2017 8:50am | Updated on August 15, 2017 11:28am
@howardaludwig
Twitter Facebook Email More
Chicago Police Capt. James LaVoy was remembered Monday for his work guiding other officers and his dedication to his family. Capt. LaVoy, 50, died Sunday of what appears to be a heart attack, according to police.
View Full Caption
DNAinfo/Supplied Photo

MORGAN PARK — When training to become a sergeant, Sean Carroll was asked to name the person within the Chicago Police Department who had most influenced him to seek the promotion.

Capt. LaVoy was found unconscious in his squad car Sunday on the Bishop Ford Freeway near the Stony Island ramp. He was taken to Trinity Hospital, where he was pronounced dead at 1:06 a.m., police said.

Carroll, also of Mount Greenwood, was among those who rushed to the hospital. There were no signs of trauma, police said, and LaVoy, 50, appears to have died of a heart attack.

"LaVoy was that person in your life that you assumed would live forever," Carroll said Monday. "His wise words could always be depended on. Now I take solace in knowing that he will be our guardian angel."

As a patrolman, Carroll worked for two years in a tactical unit under then-Lt. LaVoy. He and others who came up through this specialized unit in the Morgan Park Police District shared stories of their late boss and friend Monday. 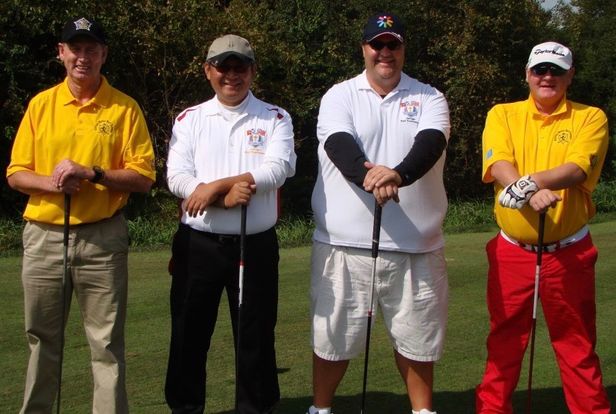 Chicago Police Capt. James LaVoy (third from left) was an avid golfer. He had three holes in one in his lifetime, the latest in June. [Supplied Photo]

Among them was the tale of Carroll and LaVoy's joint promotion party at 115 Bourbon Street in suburban Merrionette Park.

"He asked me to have his promotion party with him so people would show up for it," Carroll said. The party ended up being huge, and 90 percent of the crowd was there to congratulate LaVoy, Carroll said with a smile.

In fact, LaVoy was planning to have a backyard party Aug. 20 for the officers and others. Everyone agreed that such events were important to LaVoy, who cherished his wife, Kim, and their two children, Alex and Jessica. But he also valued his police family.

"I spend more birthdays, Christmases and Easters with these guys than with my family," said Sgt. Rich Rochowicz, who went through the police academy 25 years ago with LaVoy, whom he knew simply as "Jimmy."

Rochowicz was nearly brought to tears when remembering his friend and co-worker, who away from the police station enjoyed playing fantasy football and golf. In fact, he had three holes in one in his lifetime — the most recent in June.

"We got a lot of work done. But in the meantime, we had a lot of fun too," Sgt. Rochowicz said. "He was like a Papa Bear to these guys."

Sgt. Joe Montesdeoca was among the officers who agreed that LaVoy would have made a great police commander. And he credited LaVoy for encouraging him to seek promotions and complete his collegiate education.

"He was just an all-around good guy. He was always willing to lend a helping hand," said Montesdeoca, who wore a shirt Monday given to him by LaVoy as a thank you gift for completing a project on gang graffiti years earlier.

Our condolences to Captain Lavoy's family and friends. A terrific boss who will be greatly missed. pic.twitter.com/F3opZqNNJ2

LaVoy, a 1985 graduate of De La Salle Institute in Bronzeville, was working in the Calumet District at the time of his death, said Ald. Matt O'Shea (19th), who worked closely with LaVoy when he was in Morgan Park.

"Such a good guy. A terrific policeman," O'Shea said of the quick-witted man who lived near Saint Xavier University. Black and purple bunting was hung outside of the Morgan Park Police Station Monday in LaVoy's honor.

Visitation services will be held from 3-9 p.m. Thursday at Blake Lamb Funeral Home at 4727 W. 103rd St. in suburban Oak Lawn. A funeral Mass will be held at 10 a.m. Friday at Queen of Martyrs Parish in Evergreen Park. A private cremation ceremony will follow.

"He was certainly a very dedicated family man and dedicated to the police department," said the Rev. Edward M. Mikolajczyk, pastor of the parish at 10233 S. Central Park Ave.