BUCKTOWN — Some Midtown Athletic Club members are getting antsy over the multimillion renovation that has stretched on for more than two years and delayed plans to enjoy their summer poolside at the Bucktown fitness mecca.

"We have a short pool season here and they have really let us down and mislead us," said M. Scott Witosyznski, a member of the Bucktown club who described himself and several other members as frustrated over the fact a reopening was recently pushed from late July to Aug. 25.

Witosyznski told DNAinfo he has been paying full dues of $180 per month and he and other members were previously promised they would have most of the summer to enjoy the outdoor area, including a new pool.

During construction, the tennis courts and club has remained open, with temporary fitness and locker rooms carved out of the parking garage.

In the email sent to members last week, club general manager Michael Mahoney said the new opening date of 5 a.m. Aug. 25 is "slightly later than expected" and thanked members for their patience. Mahoney assured, "We promise it will be worth the wait."

On Tuesday, Mahoney told DNAinfo that the club's soft opening on Aug. 25, pushed back from a late July target, is scheduled to happen "pending final inspections and approvals from the City of Chicago."

"The indoor and outdoor pools will be ready to go. We’re putting water in them as we speak and are excited for our members to spend their Labor Day weekends with us. We will let members know if any elements of the club will require additional work after the soft opening, as we’re in the final stages of a multiyear, $75 million project," Mahoney said.

Anchoring the northwest corner of Fullerton, Damen and Elston avenues and visible from the Kennedy Expy., the fitness and hospitality complex at 2444 N. Elston Ave. started its expansion in May 2015.

Once completed, the new six-level complex will offer more than 575,000 square feet of athletic facilities, including two PGA golf simulators, a 75-yard indoor swimming pool, an outdoor pool that will be converted to an ice skating rink in winter and several workout rooms with as many as 160 group exercise classes offered weekly.

Earlier this month, Irving Park resident and Midtown Athletic Club member Randy Forman was preparing to eat lunch and do some work in the makeshift parking garage patio where several others members were congregating.

"It's construction, I understand the delays," said Forman, who joined the club this spring after canceling his family's membership at Chicago Athletic Club when that club scrapped its kids club, which had allowed him to drop off his child while he exercised.

"Here [at Midtown] they have a 2½-hour kids club and more events and a sense of community," Forman said.

“We completely understand that our members are disappointed. We’re disappointed too and wanted nothing more than to open on time. After the project is complete, our members will belong to the best health-and-fitness club in Chicago, and for that matter, in the country. The new Midtown will be a place for our members to experience some of the most fun and fulfilling moments of their lives with the people they love most for decades to come," he said in a written statement.

Dues for new club individual members are $180 a month, while existing members who pay $120 per month have been gradually scaled up to the $180, CEO Steven Schwartz previously said during a tour in May.

The renovations have also resulted in a loss of two tennis courts and an increase in fees to book tennis courts, according to a longtime member who declined to be named but said she knows some tennis-focused members who've parted ways with Midtown because it is no longer just a tennis club.

The club lost one tennis court to the Damen, Elston and Fullerton construction and other courts are being converted into basketball and squash courts, the member said.

Mahoney confirmed there will be fewer tennis courts when the club unveils its renovations, and starting Sept. 1 court time will increase from $31-$45 per hour to $36-$55 per hour depending on the time of day. The increase is the first since 2013.

“Tennis is embedded in Midtown’s DNA, and always will be. Period," Mahoney said.

"When we open the new club, we will have 16 indoor tennis courts, down from 18 pre-renovation, but still by far the most indoor courts at any club in the city, and to our knowledge, in the U.S. We will also debut an amazing new tennis lounge designed by Venus Williams’ interior design firm V Starr Interiors," Mahoney said.

Schwartz's father and grandfather founded the club in 1970 with tennis as its core offering.

"In the 1970s, this corner was a nice big industrial building that could house a New York-style tennis club," Schwartz previously said of the indoor courts, which attract tennis players from around the city and suburbs.

Mahoney said Midtown will "continue collaborating closely with the USTA; hosting major national events like the 2017 Boys National 14s Indoor Tournament and the 2019 ITA Championships; welcoming the game’s greatest players when they come to Chicago; and developing future generations of U.S. tennis champions.”

At the crossroads of Bucktown, Logan Square, Lincoln Park and Lakeview, the club draws about 4,000 members from those "middle of town" Chicago neighborhoods, Schwartz previously said. The new club once open can accommodate as many as 7,000 members.

A 55-room boutique hotel named "Hotel at Midtown" on the fourth and fifth floors is scheduled to open sometime in the fall, after the fitness portion of the complex debuts.

Check out these renderings of what the completed club designed by Evanston's DMAC Architecture will look like, courtesy of ArX Solutions: 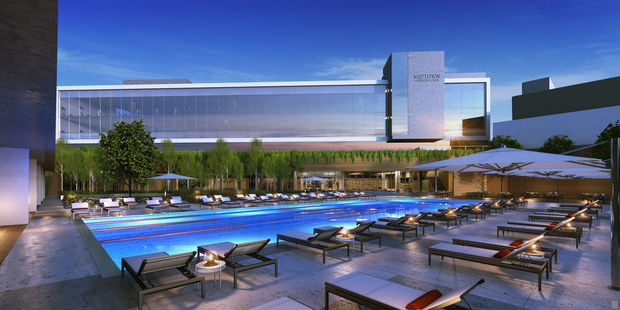 The outdoor pool will be an ice rink in winter. 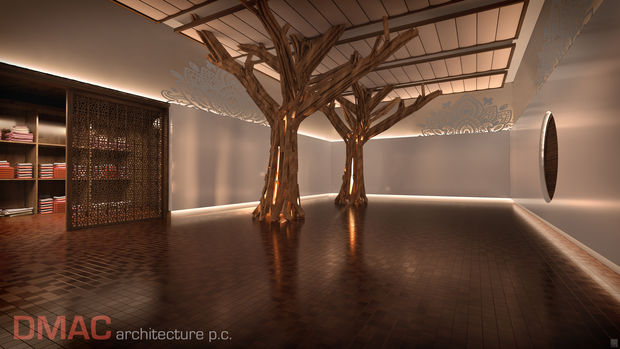 A yoga room. [All renderings by DMAC Architecture/renderings ArX Solutions] 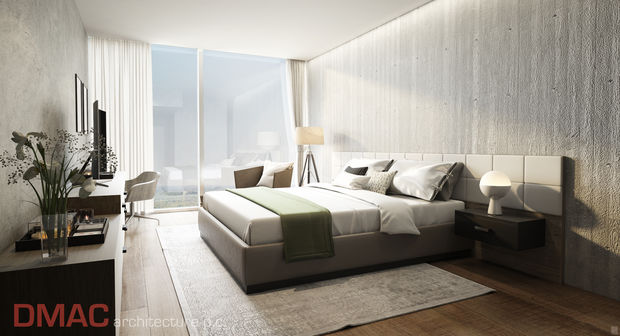 A room in the Hotel at Midtown

Live In The Original Playboy Mansion For $3.4 Million (PHOTOS)