WEST ENGLEWOOD — When 15th Ward Ald. Raymond Lopez opened his ward office in a building owned by a well-known women's shelter, he said he wanted to create an office West Englewood could be proud of.

Now Lopez (15th) finds himself ensnared in a dispute with the shelter, Clara's Place, after he says he stopped paying rent in order to use the money for critical repairs to the building.

But the shelter says Lopez owes it thousands of dollars, and Clara's Place officials have gone as far to accuse Lopez of hurting the homeless women it helps in its building at 1652 W. 63rd St. by not paying rent. The shelter said it hasn't been able to pay its bills because Lopez owes it so much money.

“He got in the building, but he's not paying his rent, he's squatting,” said McKinley Bell, son of the founder of the shelter, Clara Kirk. “He can say what he wants to say, but we don't have anything in writing.”

Lopez said Friday he is going to start paying rent again, retroactive to April. He denied he owes the shelter money, and said he has spent more than $18,000 repairing serious problems in the building. He said he is being punished for doing a good deed by opening his office in the building run by the long-struggling organization.

“When others abandoned her and tried to get her to close her doors, I have stood there next to her,” Lopez said of Kirk. “And I feel for her health, as it’s failing, but the money situation is only a part of the problem of what’s going on over there.”

Indeed, the dispute is complicated by the fact that Kirk, the center's longtime director, had a stroke in the spring and has had major memory loss. Her son even went as far as to say the stress over the rent dispute contributed to his 76-year-old mom's health problems.

Seventeenth Ward Ald. David Moore, whom Kirk approached as the dispute escalated, has jumped into the fray, accusing Lopez of being a bad tenant.

Kirk, a former school bus driver and CPS employee, runs West Englewood United Organization. She opened Clara's House, a shelter for homeless women and their kids, in 1987, according to its website. She also runs Clara's Place, which offers permanent housing for women and children. Up to 13 families can live in separate units at Clara's Place, which is in a three-story building attached to Lopez's adjacent one-story office at 1650 W. 63rd Street.

The shelter has a history of building code violations and has had trouble paying bills. In 2013, it was almost shut down by the city after it faced $41,000 in fines for violations, but eventually was allowed to stay open after making repairs and paying a $1,000 settlement.

Later that year its heat was turned off because of an unpaid $21,000 bill, but donors stepped up to pay it off.

Over the years, because of the building code violations and other issues, the organization has seen grants frozen from the city and other agencies.

Lopez signed a lease in September 2014 when he was running for office and later signed a four-year lease in May 2015, after he was elected alderman. The lease was for $800 a month.

When he signed the second lease, Lopez said he made a verbal agreement with Kirk in which he agreed to pay to repair a leaky roof and clean up mold in the ceiling in lieu of paying rent. He said he fronted the money for repairs that was to be applied to rent from May 2015 through April 2017.

The deal was made "in front of two other individuals in this office, where she agreed that I would sign a lease if I could deduct the repairs to her property from my rent because she was unable to make the necessary repairs to the property,” Lopez said in an interview. “She agreed and said yes."

While Lopez provided multiple copies of invoices for repairs to the building, he said he saw no need to ink the agreement with Kirk: "We have known each other for years, and I had never had a need for written agreements between friends." 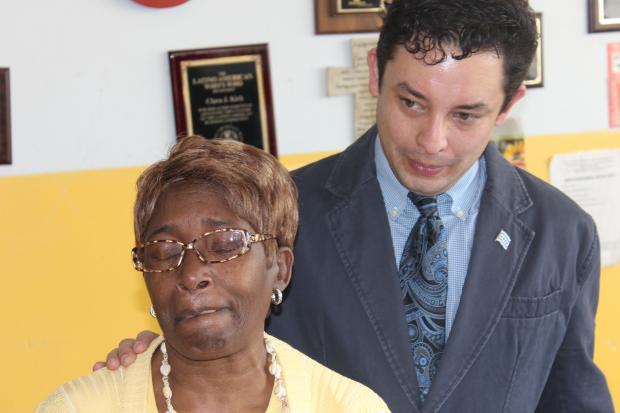 Clara Kirk was overcome with emotion after being honored by the Illinois African American Families Commission in 2013. Raymond Lopez, the Democratic committeeman at the time, was also there. [DNAinfo/Wendell Hutson].

He said he made other repairs, too, because of "years of neglect" to the building. The bathrooms didn't work, and doors and windows needed to be fixed or replaced, he said. Moisture leaked into the office through the walls when it rained, he said. He said he also repaired the furnace and air conditioning system and took care of electrical issues.

But Shawn Warner, an attorney for Clara's Place, said Lopez also deducted money for cosmetic improvements to the office that Lopez is responsible for under terms of the lease.

Lopez denied that and said he paid for that work — amounting to $17,000 — and didn't expect the organization to cover those changes.

“We’re not saying we charged for paint or for the layout of the office,” he said. “Those are things that I wanted, but we did not deduct them."

Moore said Kirk, who lives in his ward, approached him for help in resolving the dispute in late June.

Her son, Bell, is blaming a part of his mother’s stroke on the stress caused by the alderman not paying his rent.

“It just became a burden to her where she worries about things that’s going on and things that should be going on,” Bell said. “It caused her to have a stroke. I believe the alderman played a part in it, worrying about him and his rent and not being able to [use it] to help the families that really need the help.”

“This shows a part of his character because if you mistreat the homeless, and along with mistreating the homeless, you taking advantage of a senior citizen, well I don't think that you are a good person we need in office,” Bell said.

Lopez denied Bells' accusations and said Kirk's health has been hurt by her trying to run two buildings — Clara’s Place and Clara’s House — without much help from others.

“It’s brought her to the point of exhaustion and deteriorated her health,” Lopez said. “For too long Ms. Kirk has been the only one using her own dollars to keep those doors open, even while her friends and family have benefited from her generosity and continued caregiving. It is simply not fair, accurate and unacceptable for anyone to lay blame for her stroke or her failing health on any one individual.”

Lopez said while he supports Clara’s Place, it needs to address ongoing building violations before the city.

According to city records, the building failed an inspection in May, receiving several violations for problems, including a crumbling parapet wall atop the building.

The wall is "dangerous and hazardous," the inspection report read, and "has already experienced a partial collapse of 15 feet of brickwork and stone work. The remaining brick and stone work is unstable. This is over the public way of a busy commercial corridor."

Another violation was for two back porches on the third floor, that among other issues, had joist hangers that were "severely rusted," city records show.

The issues were resolved in July, court records show.

Other tenants said they've complained of problems, too.

Christina Dennis, who is pregnant, has lived in two-bedroom apartment at Clara's Place with her three children between the ages of 3 and 11 since November. Dennis described her experience as “hell.”

“When I first got here, I cried for two weeks because I was so depressed,” she said.

The unit was nothing like she expected. Nails protruded from walls and floors, and there was mold in the sink. There were dead roaches in the cabinets, mice droppings, broken screens and a cracked toilet bowl, she said. Her bedroom has four broken wall sockets with exposed wiring. Her neighbor's ceiling, the floor below her, has been falling, and now Dennis said she's afraid she or her children may one day fall through while in the bathroom.

“I’m trying to get my money back; I have to move,” she said, adding that the living conditions have her stressed during her pregnancy. “I’m very uncomfortable.”

She said she has tried to address the problems with management but has been treated badly or ignored.

Bell acknowledged the building has problems but said the charity was desperate for funds. He said only seven of the 13 apartments are occupied and only three tenants are paying rent.

"We’re not equipped with the money to facilitate—to continue to fix apartments— and these people are not even paying rent. We have people in there who haven’t paid rent in five years,” he said.

Warner, the attorney, said at this point he hopes to keep the dispute with Lopez out of court.

“You never want it to get to that step. That’s why it hasn’t gotten to that step," he said. "He’s an alderman. You don’t want to get into a situation where it becomes a mountain, but there are a lot of things going on with that property that have to be fixed and corrected, and the bottom line is the organization does need the money.” 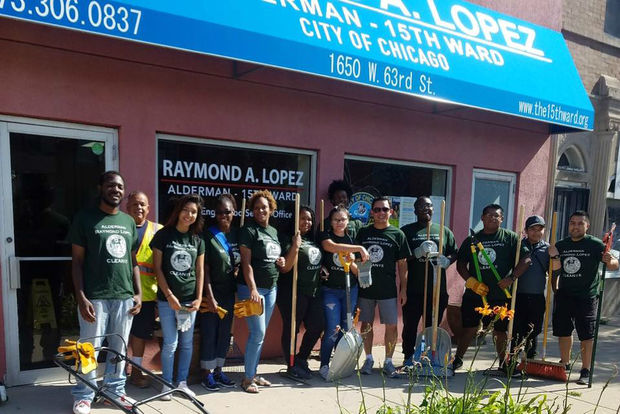 Ald. Raymond Lopez (center, in sunglasses) stands in front of his West Englewood office with volunteers who helped clean up the neighborhood in a photo posted on Facebook in late July. [Facebook]