DOWNTOWN —  The case of the River North high-rise murder tied to a Northwestern professor took several dramatic turns Friday with revelations the professor donated $1,000 to a library in the dead man's name and sent a video to friends and family apologizing for his involvement, police said.

The video was sent by Northwestern University professor Wyndham Lathem, who is on the lam and wanted for first-degree murder, police said.

Also wanted is University of Oxford employee Andrew Warren, suspected of being part of the murder and the post-murder donation to the Lake Geneva Public Library, police said.

Chicago Police are still working to find the men named in first-degree murder warrants that allege they "without lawful justification and with the intent to kill" stabbed Trenton H. James Cornell-Duranleau "multiple times."

The slaying of 26-year-old Cornell-Duranleau happened July 27 in Lathem's 10th-floor apartment at the Grand Plaza, 540 N. State Street, authorities allege. Cornell-Duranleau was found stabbed about 8:30 p.m. that evening and was pronounced dead at 9:05 p.m.

Lathem sent a video to several friends and family members where he apologized for his involvement in the slaying, police said. U.S. Marshals, who are helping Chicago Police with the case, spoke with several of the people who received the video, but police were not able to say what Lathem said in the video.

There was no mention in the video of surrendering — nor of taking his own life, a police source said.

Meanwhile, there is also a surveillance video of Lathem and Warren in the building where Cornell-Duranleau was found dead, said Chicago Police spokesman Anthony Guglielmi, and that video is being "treated as evidence."

The scene of the crime itself was "very graphic," Guglielmi said.

"The victim's body had been stabbed several times ... to the point of mutilation," Guglielmi said. "This was an attack that had a great deal of rage or passion, and the victim was brutally murdered."

Guglielmi said that the day after the slaying, Lathem and Warren went to the Lake Geneva Public Library and donated $1,000 in Cornell-Duranleau's name, as first reported by the Sun-Times. There's no known connection between the library and Lathem, Warren or Cornell-Duranleau.

Chicago Police have been working with Lake Geneva Police, Guglielmi said. The State Department has flagged Lathem and Warren's passports.

On Thursday, Guglielmi asked the men to "do the right thing" and turn themselves in to police.

"We want to facilitate a safe surrender."

In an email to residents Monday, Grand Plaza management wrote that the police department was investigating the death as a homicide "and are exploring a variety of motives, including a possible domestic incident."

According to Northwestern University spokesman Alan Cubbage, Lathem is an associate professor of microbiology and immunology who has worked for Northwestern since 2007. He has been placed on administrative leave and barred from entering school property, Cubbage said, noting that the school is cooperating with police.

"There is no indication of any risk to the Northwestern community from this individual at this time," Cubbage said in a statement.

According to his LinkedIn profile, Lathem researches the ways in which pathogenic bacteria cause disease in humans. He focuses on "host-pathogen interaction" in lung infections.

Warren is a senior treasury assistant at the University of Oxford in Great Britain, according to the school's website. Court documents place his home address in Oxford, England.

“We have been in contact with the police in the UK and are ready to help the U.S. investigating authorities in any way they need," a spokesman from the University of Oxford and Somerville College said. "Andrew Warren’s colleagues at Somerville College have now all been informed and are shocked to learn of the case. Whatever the circumstances, we would urge him to contact the U.S. authorities as soon as possible, in the best interests of everyone concerned.”

Cornell-Duranleau, a native of Corunna, Mich., had jobs as a hair stylist after earning his cosmetology license at Stanley Harris School of Cosmetology in Holland, Mich., according to an obituary posted by his family. 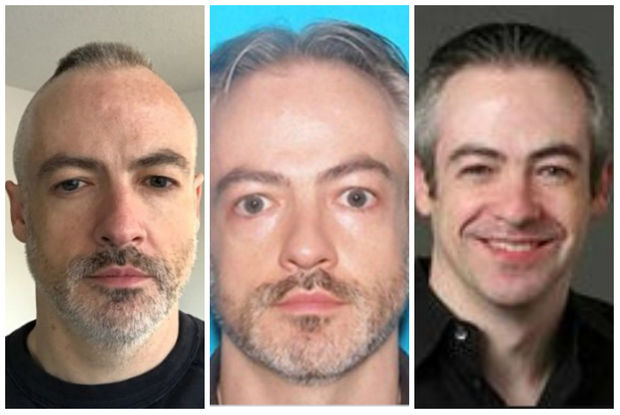