Yet everybody loves an escape tale, going back to "The Count of Monte Cristo," "The Prisoner of Zenda" and beyond. And there's something especially enchanting about animal escapes, when wild beasts somehow break free of their boundaries and roam the same areas as zoo visitors.

As long as things don't go awry from there, of course.

The zoo's greatest great ape escape took place 35 years ago Thursday, when Otto, head of Lincoln Park Zoo's gorilla troop in the still relatively new Great Ape House, broke free of the outdoor enclosure and went for a morning stroll around the zoo.

But first a little background. Otto was the latest in a long line of great apes at the zoo. His greatest predecessor, Bushman, was such a marvelous specimen, at 6 feet-plus and 550 pounds, and he was so beloved by Chicagoans, that upon his death in 1951 he was preserved and stuffed, and he remains on display today at the Field Museum, albeit somewhat hidden away on the ground floor. 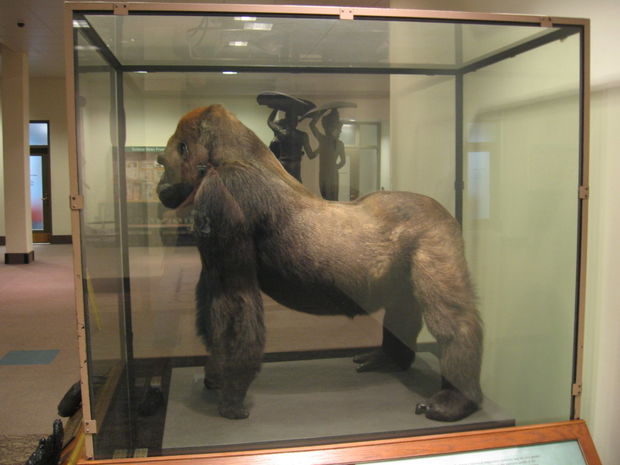 Bushman, stuffed and on display at the Field Museum. [Flickr/straightedge217]

Bushman was succeeded by Sinbad, an ornery old cuss later labeled a "wife beater." When the zoo opened its new Great Ape House in 1976, Sinbad was considered so set in his ways and rancorous that he remained in the old Primate House in the cage previously occupied by Bushman and didn't make the move with the rest of the troop, eventually dying in 1985.

Not so Otto. At a time when breeding gorillas in captivity was still a difficult operation, Lincoln Park Zoo developed one of the first and most successful gorilla breeding programs, with Otto siring 11 gorillas (that we know of).

He had been a gift to the zoo from the African nation of Cameroon in the mid-'60s, and had been named after Gov. Otto Kerner (the first in a series of recent Illinois governors to go on to do time in prison).

While not as beloved as Bushman, and not as impressive a specimen, at about 450 pounds, Otto was still the longtime head of the Lincoln Park Zoo troop, and he endeared himself to Chicagoans as the star of a 1977 PBS documentary, "Otto: Zoo Gorilla," about his move into the new digs, but most of all with his escape five years later on the morning of July 27, 1982.

This being before the age of surveillance cameras — at least where most zoo exhibits are concerned — it's not known how Otto broke out of the outdoor enclosure at the Great Ape House about 9 a.m. that day. He somehow scaled an 11-foot glass wall that previously had been considered the standard for a safe height for gorilla enclosures and eluded two electrical wires to go on what was estimated by some to be a half-hour constitutional. 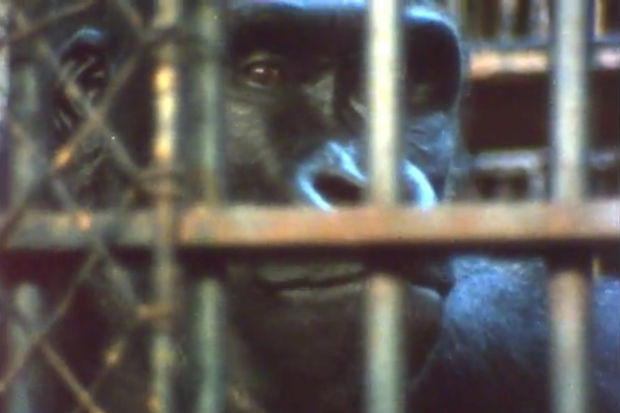 According to "The Ark in the Park," a zoo history written by former Curator of Mammals Mark Rosenthal, Otto was spotted strolling the grounds, on his way back to the old Primate House, and an alert went out. Zoo Director Lester Fisher, also a beloved and popular figure from his days making regular appearances on WGN-TV Channel 9's "Ray Rayner and Friends" morning show, thought at first it was Sinbad who'd broken out. As Sinbad was then old and comparatively feeble, Fisher wasn't too alarmed and went to investigate.

Lincoln Park Zoo animal escapes are the stuff of legend, although the most colorful tales go back to the zoo's formative days in the 19th and early 20th century, when sea lions broke out and went flopping down Clark Street, or bears got free and roamed the zoo. An elephant once broke out in 1892 and smashed up a nearby bar before having its legs roped and tied to a tree by keepers.

Fisher told the Tribune upon his retirement: "We've had chimps run down Cannon Drive. An old polar bear, Bea, walked out of her habitat on an ice bridge. And we've had lions loose in the Lion House."

In fact, both Bushman and Sinbad had broken out of their cages into the keepers' area of the old ape house. Bushman bit a keeper before being chased back into his cage when the keeper brandished a handy garter snake at him. Sinbad came closest to actually getting out in 1964, with only a screen door between him and the great outdoors, but was shot with a tranquilizer gun before he could determine just how easy it would have been to burst through the door and outside.

Now Fisher, however, spotted Otto free and walking between the Lion House and the Reptile House. Senior keeper Jim Higgins worried what might happen if some family wandered into his path, but also worried about Otto himself, telling a reporter, "In Otto's case, what I was afraid of was some cop coming along with a .357 Magnum and wasting him."

Instead, zoo veterinarian Thomas Meehan, who was known to practice his aim on tranquilizer guns by shooting small paper boxes at a distance of 10 or so feet, pulled up in a truck near Otto as he rested just outside the Lion House, took aim and winged him in the thigh.

Otto wasn't done, according to the book. He ambled across to what was then the Crown Field Center, the zoo's educational facility, and climbed to the top.

"As staff members watched anxiously," Rosenthal wrote, "the big silverback teetered on the edge of the building, but the tranquilizer finally kicked in, and a sleepy Otto fell unharmed into the bushes."

Otto was returned to the Great Ape House, although outdoor privileges were suspended for all. The United Press International story on the escape said he had just 15 minutes of freedom. 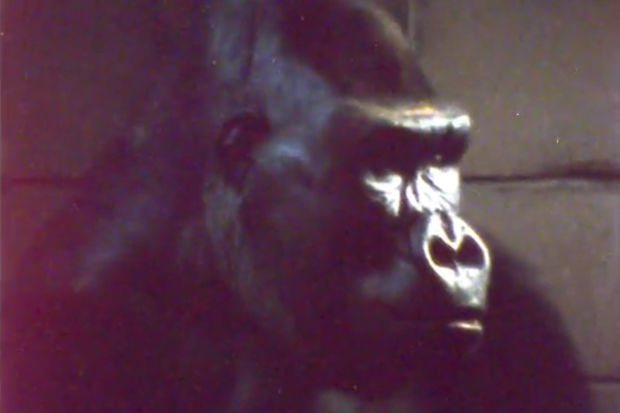 An image of Otto from the PBS documentary "Otto: Zoo Gorilla."

Otto died in 1988 of a sudden heart attack, last of the beloved line of great apes at Lincoln Park Zoo. Try naming the head gorilla today.

The Chicago History Museum's Peter Alter said the escape story still has the power to amuse.

"Perhaps Otto, in his 1982 leisurely stroll around Lincoln Park Zoo, was only trying to recreate Marlin Perkins’ 'Zoo Parade' TV show filmed at Lincoln Park Zoo in the 1950s," Alter said. "Zoo visitors scurrying for shelter in buildings to get away from Otto didn't see if that way, though."

Neither does Lincoln Park Zoo, which is still less than excited to relive the story. It declined to comment or offer any images of Otto.

Even so, perhaps Fisher said it best after Otto's jaunt through the zoo: "Animal escapes are always great stories," he said, "if nothing bad happens."