MOUNT GREENWOOD — St. Xavier University soon will finish installing a new track — the final stage of a three-part overhaul of its stadium facilities in Mount Greenwood.

The $850,000 project began with the renovation of the locker rooms for the Cougars' football and soccer teams in summer 2014, according to Kelly Murphy, a spokeswoman for the school at 3700 W. 103rd St.

The second stage added a new ticket booth and entrance to Bruce R. Deaton Memorial Field, which was completed in summer 2015. Construction of the new eight-lane track began July 10.

"The new track at Deaton stadium is the result of a number of generous alumni athlete donors who believe in our athletes and our program," said Bob Hallberg, the university's athletic director.

The new track will be finished for the Cougars' first home football game at 6 p.m. Aug. 31. When the team takes the field that day, some players are expected to will touch a bronze cougar on the head for good luck.

The new life-size statue will be installed Thursday outside of the home team's locker room, Murphy said. 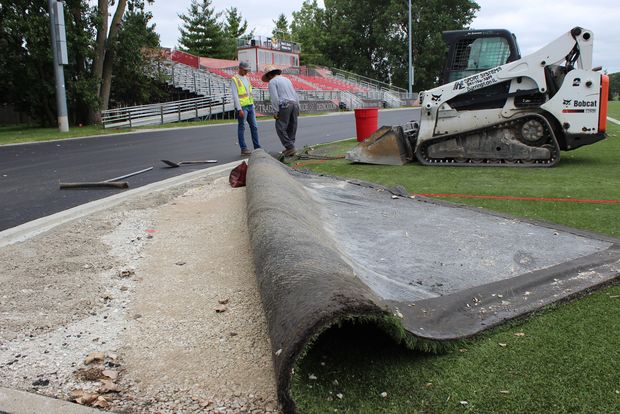 Workers pull back a portion of the FieldTurf to work on the installation of a new track at St. Xavier University in Mount Greenwood. [DNAinfo/Howard A. Ludwig]

St. Xavier installed lights for games and practices in summer 2007. And the natural grass field was replaced in 2005 with a synthetic playing surface called FieldTurf.

"The generosity of our football alums and their commitment to the Cougar football program and the university is absolutely incredible, especially considering how young our program is," said Mike Feminis, head coach of the 25-year-old football team at St. Xavier.

"They are a very special group of guys," he said.