Bashir Salahuddin Opens Up About His South Side-Centric TV Comedy

BEVERLY — Bashir Salahuddin knows plenty of funny people on the South Side, and the new show he's pitching to Comedy Central aims to tap into that deep well.

Salahuddin was born in South Shore and raised in Auburn Gresham. He lives in Los Angeles now but was back in Chicago earlier this month to film a workplace comedy centered on a rent-to-own store.

The unnamed show relies on the "wild characters" and scenarios that stem from the South Side shop, Salahuddin said Thursday. He was inspired by the hilarious stories of a friend who worked at such a place and stars in the show.

"It's a great show and it is extremely funny," said Salahuddin, who is busy editing the pilot.

Came home to Chicago to do guest on this amazingly funny pilot for Comedy Central with these dope people... #SouthSide #ComedyCentral #GreatTimes #SetLife

The pilot episode included a scene filmed July 12 at the Beverly Woods Restaurant and Banquet Hall in Morgan Park. This scene involves a college graduation party. Other filming occurred in Chatham and Englewood, Salahuddin said.

He knows most of the headlines of his native South Side focus on shootings and violence. But often missing from such stories are the personalities of people living in those communities, he said.

"There is definitely a stigma associated with the financially challenged parts of Chicago, specifically the South Side," said Salahuddin, who graduated from Beverly's John H. Vanderpoel Humanities Academy and fondly remembers hanging out in the Dan Ryan Woods.

He went on to attend Whitney Young Magnet High School on the Near West Side and later went to Harvard, where he met Diallo Riddle. The pair wrote the South Side pilot for Comedy Central and got their big break together in 2008 as writers for "Late Night with Jimmy Fallon."

Salahuddin said highlights from his time on the NBC show included such viral hits as "The History of Rap" and "Slow Jam the News," which included a cameo from then-President Barack Obama.

Most recently, he was cast as Keith Bang, a referee in the Netflix comedy series, “GLOW.” Salahuddin has one of the few male parts in the show about the startup women's wrestling league from the 1980s.

"My character [Keith Bang] is what the world needs more of — a super-supportive husband," he said. 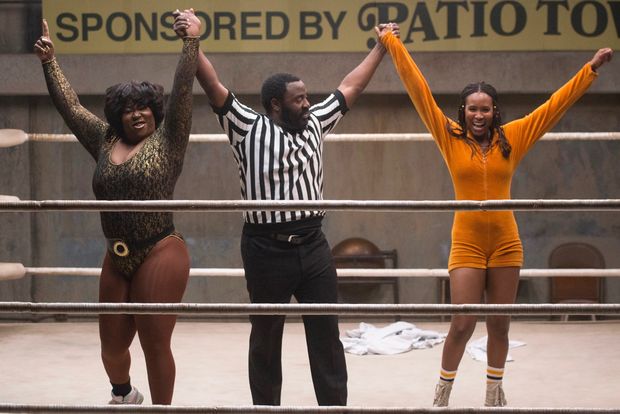 As for the South Side project, he said the show is funny and filled with the hope of those working at the shop "trying to get to the next level," said Salahuddin. Among the lines of work the employees aspire to are musician, teacher and astrophysicist.

Working at a rent-to-own store might have an employee dropping off a new couch in the morning and repossessing a microwave later that same day, Salahuddin said.

For the finer points, Salahuddin leaned on family and friends in Chicago. His brother, Sultan Salahuddin is also listed as a writer.

And the plot is designed to be flexible, allowing writers to incorporate their experiences from life in the city into the script. One such example came from Bashir Salahuddin's trip to a recent Cubs game.

The show spotlights various parts of the city. And Salahuddin said he was encouraged throughout the filming by the reaction to South Siders when they learned a comedy was being filmed in their neighborhood.

"It is really cool just to see people's eyes light up when they see what we are doing," he said.