By Howard Ludwig |&nbspJuly 21, 2017 6:12am
@howardaludwig
Twitter Facebook Email More
This crumbling World War I monument in the Dan Ryan Woods will be moved near the visitors center and perhaps reimagined, according to officials with the Forest Preserves of Cook County.
View Full Caption
DNAinfo/Howard A. Ludwig

BEVERLY — A forgotten World War I monument in the Dan Ryan Woods will be moved to a more prominent location near the visitors' center, officials with the Forest Preserves of Cook County said Thursday.

The monument now at the southeast corner of 87th Street and Western Avenue will first be disassembled and placed in storage. Then, a group dedicated to preserving the marker will decide whether to rebuild or envision it at the new location, said Timothy Noonan, a Beverly resident.

Noonan organized a neighborhood meeting to discuss the fate of monument May 20. He also launched a Facebook page in the hopes of raising awareness about the marker, updating neighbors about its preservation and seeking insight into the history of the mysterious slab.

He said the push to restore the monument was initially sparked by reports showing the area surrounding the marker overtaken by tall weeds. Worse yet, some riders waiting at the nearby bus stop had begun using the monument as an outdoor toilet. 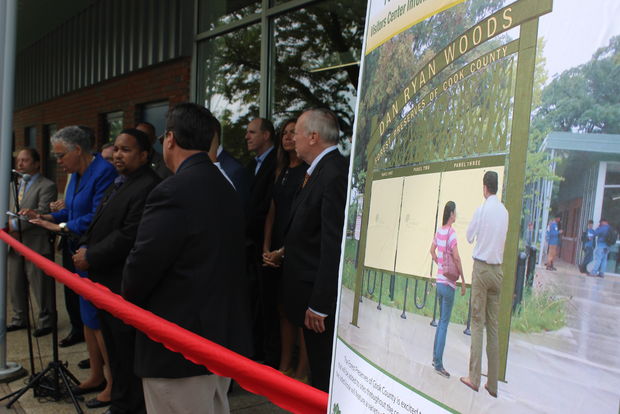 Cook County Board President Toni Preckwinkle and other commissioners were at the Dan Ryan Woods Thursday to cut a ribbon celebrating the improvements at the Forest Preserves of Cook County site at 87th Street and Western Avenue in Beverly. [DNAinfo/Howard A. Ludwig]

Volunteers have since cleaned up the area. And a small plaque that reads "Chicago Council of Gold Star Mothers" is all that remains on the crumbling concrete and stone structure. It appears a larger plaque — perhaps describing the reason for the monument — has been removed.

"The question is ... what did the original plaque say?" said Noonan, who has reached out to local historians as well as the Washington, D.C.-based American Gold Star Mothers Inc. looking for answers.

This national group is made up of "mothers who have lost a son or daughter in the service of our country," according to its website. But officials have no specific information about the marker on the Far Southwest Side.

Regardless, Noonan is eager to see the monument moved and said he expects that some of the rocks from the existing structure will be used as part of a new monument. He would like to see some sort of walking labyrinth used to promote peaceful meditation.

She picked out the site near the visitors center on the northeast corner of the same intersection where the monument currently sits. The new site will be in a shady area and will replace a concrete bench.

Daley said he hopes to make some sort of announcement on the new monument with a year or so. And Noonan added that fundraising will begin in earnest once the size and scope of the monument is determined.

Daley was at the Dan Ryan Woods along with Cook County Board President Toni Preckwinkle and other elected officials to cut a ribbon celebrating several upgrades to the facilities as well as to announce future improvements.

Existing upgrades include improvements to the visitors center, a renovated pavilion, a disc golf course, a walking loop and an outdoor classroom. A nature-inspired playground and new signs are still to come as well as stairs for the sledding hill that will double as exercise area.

Inspired by similar stairs at Swallow Cliff Woods near suburban Palos Park, the stairs will cost about $400,000. The stairs and the $600,000 playground were initially scheduled to be built this year but have been pushed back to 2018, said Chris Slattery, the director of planning and development for the forest preserves.

Still, the Dan Ryan Woods remains one of the "Gateway" locations in the forest preserve system, said Arnold Randall, the general superintendent for the system that includes nearly 70,000 acres.

Activities to planned for the commemoration include guided hikes, archery, information about the preserve and Dan Ryan himself, as well as a free "Forest Jams" concert.

"We are extremely proud to be anchored in this community but as we look ahead into the next century we also want to be known as a gateway,” Randall said.