DOWNTOWN — River North residents are trying to find the owner of a dog who they said attacked a corgi and husky Sunday at a dog park.

The attack left the husky mix with two puncture wounds, Robert Emanuel said. Emanuel said his own corgi, Riot, also was bitten and had wounds so deep he needed 28 stitches and drainage tubes to prevent infection. A photo shows Emanuel trying to stop the attack while the other dog's apparent owner, a woman with blonde hair, stands nearby.

But Emanuel doesn't want the dog behind the attacks, named Nyla, to get into trouble, he said. He just wants Nyla's owner to be aware of what she should do to prevent more attacks. He's offering a $500 reward to whoever can give him the owner's name and contact information so they can talk.

"I do think that [Riot] will recover in terms of his mobility and everything, but I worry that this would happen again with this dog," Emanuel said.

The first attack happened about 10 a.m. Sunday at a busy dog park near Erie Street and Larabee Avenue where many people are "regulars," resident Charles Kim said. Kim was at the park with his puppy when he saw the husky mix, Vinny, go up to a dog he didn't recognize, Nyla, while Nyla played with a ball.

Vinny sniffed around Nyla and tried to grab her ball, Kim said. Nyla "did not like that at all" and dropped the ball and bit Vinny's legs, he said.

Vinny writhed as his owner ran over, lifted up the husky and immediately left. Vinny was "extremely freaked out," Kim said, and there were puncture wounds in his back legs.

Emanuel was at the park with Riot and saw the "scuffle" between Nyla and Vinny, he said. He wasn't familiar with Nyla or the woman who'd brought her to the park, but he saw that they stayed after the incident so he walked over to the woman to talk to her. 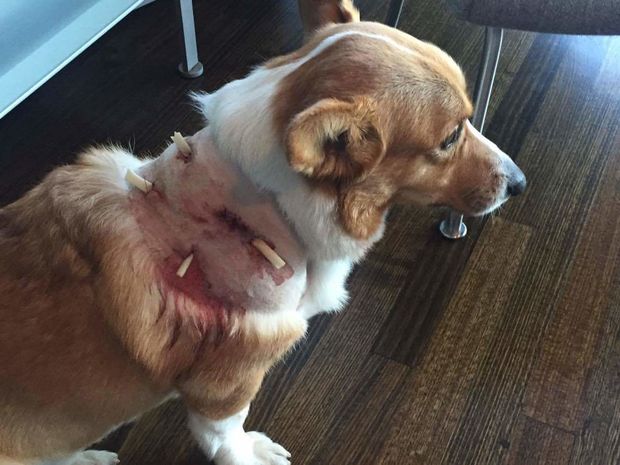 Riot, a corgi, required 28 stitches after being bitten and shaken at a River North dog park, his owner said. [Courtesy Charles Kim]

Nyla shook Riot back and forth in her mouth, Emanuel said, as the 32-pound corgi howled.

Not thinking, Emanuel grabbed Nyla and squeezed her, trying to stop the shaking, he said. Nyla's owner stood nearby, "horrified" and frozen, Emanuel said. Kim, not wanting to bring his puppy over for fear of the dog being bitten, took photos of the incident.

That's when a woman who'd just gotten to the dog park ran up and punched Nyla in her chest three times, Emanuel said. Nyla dropped Riot and the woman who'd hit Nyla picked Riot up and took him out of the dog park.

Emanuel was still holding Nyla and saw she had "a ton of blood in her mouth," he said, and realized it was Riot's blood.

Emanuel ran after Riot and saw his dog's skin was red and inflamed. He took the corgi home and ran a towel over Riot's fur; when he saw Riot's blood on it, he took his dog to an emergency vet.

Riot needed more than $1,000 in care, receiving stitches and two drainage tubes, Emanuel said. Though Riot's recovering physically and had his drainage tubes removed Wednesday, Emanuel said he's been "spooked" since the incident.

Vinny, the husky who was bitten, did not require medical treatment, Kim said.

"It's about quality-of-life issues in the neighborhood and, 'Is it possible your dog will get killed going to the dog park?'" he said.

Emanuel, who loves dogs, hopes he can find the woman and talk to her about how to restrict risk by not going to the park or getting behavior modification for Nyla. He gave her his contact information but hasn't heard from her, and no one from around the dog park has seen her or Nyla.

His "biggest concern is the woman won't do anything at all the next time this happens it isn't going to be with a dog," he said. "It could be with a kid."

And though Nyla appeared to be a gray pit bull, Emanuel said the attacks could have happened with any dog breed.

Information can be emailed to Emanuel at rjechicago2@gmail.com. He needs the woman's name and contact information to provide the $500 reward, he said.