CITY HALL — A key city panel approved the construction of a seven-story, 297-unit luxury apartment complex near the Cumberland CTA Blue Line station in a 7-1 vote on Thursday despite the objection of Ald. Anthony Napolitano (41st), who said residents of the 41st Ward did not want the project.

Unveiled by the developer Glenstar O'Hare, LLC last December, the M-shaped building at 8535 W. Higgins Road would join a cluster of hotels and office mid-rises between the Kennedy Expressway and the border of suburban Park Ridge. It would include studio, one-bedroom and two-bedroom apartments, with the cheapest units starting around $1,200 per month.

The proposal was originally set for approval by the Chicago Plan Commission last month, but Napolitano delayed the hearing by 30 days.

On Thursday, he asked the commission to scuttle the plan.

“As an alderman, I cherish development coming to our ward,” Napolitano said. “But my residents have come to my office in droves to say they do not want this development.”

The building would include seven affordable units, and Glenstar O'Hare would pay $2.9 million in lieu of putting 23 more affordable units on site, as mandated under the city's 2015 Affordable Requirements Ordinance. 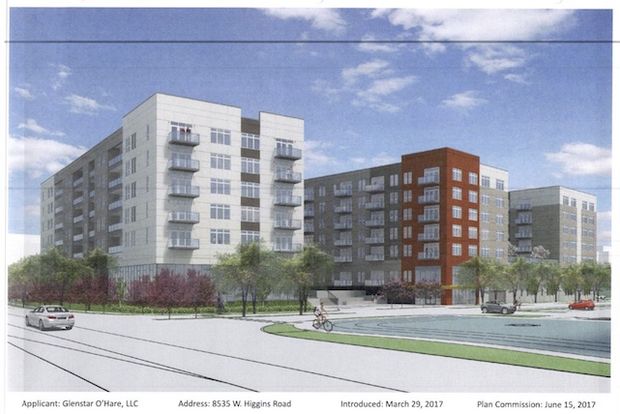 The seven-story building would include 297 apartments and 270 parking spaces. [DNAinfo/Alex Nitkin]

Ald. Tom Tunney (44th) was the sole member of the commission to vote against the plan, which also includes 270 parking spaces, saying he was honoring Napolitano's request. He also said he was disappointed by the building's design, and its relative lack of affordable units.

A different developer had already scored approval to build a mixed-use project with apartments and retail stores on the site, but he backed out in 2015. Last year, Glenstar O'Hare entered into a contract with the property owners to offer their own idea, which strips out the retail and replaces it with more apartments.

If the proposal were office space — as originally envisioned — the building could have been nearly 11 stories tall, Glenstar O'Hare principal Larry Debb told the commission on Thursday.

But the alderman asked the commission to reject it anyway, saying "thousands" of constituents had called his office to decry the plan. 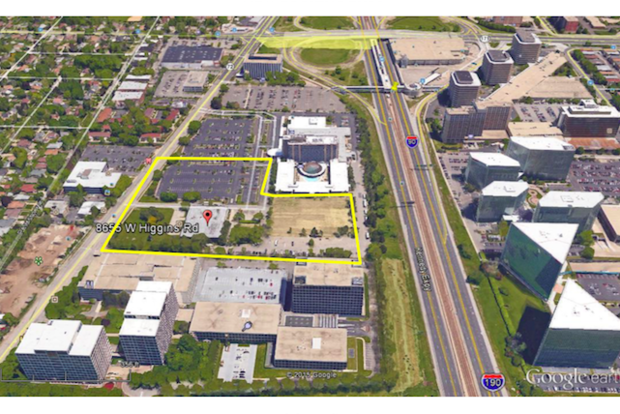 The building would be a few hundred feet from the Cumberland Blue Line station, between the Kennedy Expy. and the border of suburban Park Ridge. [DNAinfo/Alex Nitkin]

The alderman said the new homes could strain the police force in the Far Northwest Side Jefferson Park (16th) Police District, already the most understaffed district in the city by population and area. It could also exacerbate overcrowding at nearby Dirksen Elementary School, 8601 W. Foster Ave., which is already near 150 percent capacity, Napolitano added.

But Debb has said the building — whose plans include a pool, "spa-type facilities," an "entertainment area for parties" and a "small private theater" — would be targeted to young professionals working near O'Hare Airport.

A study commissioned by the developer found that the project's "small, luxury apartments" would have no impact on Dirksen, Debb said.

Neighbors had offered few critiques of the plan during two public meetings in December and January, leading to an official endorsement from the 41st Ward Zoning Advisory Committee on Jan. 4.

While Napolitano initially said he would follow the committee's recommendation, he changed his mind after Ald. John Arena (45th) backed a plan to build 100 units near the Jefferson Park Transit Center, some of which would be set aside for low-income and disabled people.

The wave of intense opposition to that development made Napolitano switch positions, the alderman's chief of staff Chris Vittorio said last month.

During his 2015 campaign for alderman, Napolitano had vowed to always vote in line with the advisory committee's recommendations. Thursday marked his first departure from that longstanding tradition, upheld by former Ald. Mary O’Connor, whom Napolitano defeated in 2015.

Last month, Napolitano was the only member of the City Council to vote against the proposal at 5150 N. Northwest Highway in Jefferson Park, bucking a longstanding tradition that give aldermen the ultimate authority over developments on their own turf.

While the Glenstar O'Hare project does not need a zoning change, the City Council's zoning committee must agree to allow apartments to be built where offices were once planned.