MOUNT GREENWOOD — A monument for the indigent, unknown and unborn buried in Cook County was unveiled Thursday afternoon at Mount Olivet Cemetery in Mount Greenwood.

A blessing of the monument placed in the southeast corner of the Catholic Cemetery at 2755 W. 111th St. was paired with the burial of five unidentified people, 24 unborn children and the cremated remains of 80 poor people.

Cardinal Blase Cupich, the Archbishop of Chicago, sprinkled holy water on the marker and pointed to the words of Pope Francis, saying that providing a final resting place for those often overlooked by society is an act of mercy.

"Even though at times we don't include people at the table of life and we try to overcome that, surely in death we shouldn't be alone," said Cupich, who agreed to provide the burial space at the request of Cook County President Toni Preckwinkle. 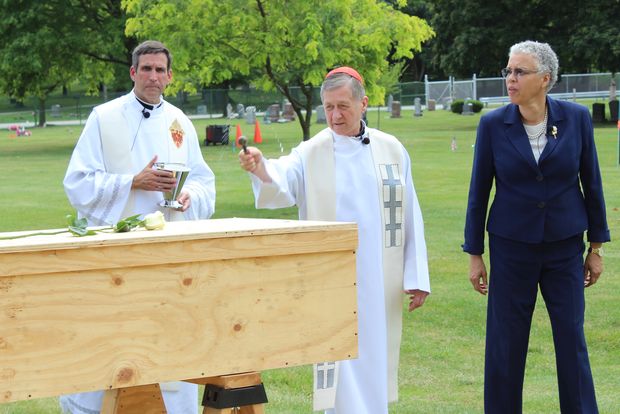 The Rev. Lawrence Sullivan, pastor at Christ the King Parish in North Beverly and associate director of Catholic Cemeteries for the Chicago Archdiocese, Cardinal Blase Cupich, the Archbishop of Chicago, and Cook County President Toni Preckwinkle all took part in a blessing Thursday ahead of the burial of the county's unborn, unidentified and indigent persons. [DNAinfo/Howard A. Ludwig]

Preckwinkle was also on the Far Southwest Side for the burial and promised that the county will continue to provide dignified burials to those who cannot afford such services as well as others who slip through the cracks within our communities.

"We may not know the stories or the challenges of the people we bury, but each person was a member of our community — a friend, a neighbor, a son or a daughter," she said. "This monument is a symbol of our community coming together to care for one another."

The memorial itself was donated to by Maurice Moore Memorials in southwest suburban Chicago Ridge. And the ceremony was attended by funeral directors from throughout the area, who also transported the plain, wooden caskets to the cemetery.

The caskets themselves were all marked with small white cards that included a date of birth, serial number and — in some cases — the name of the person inside. 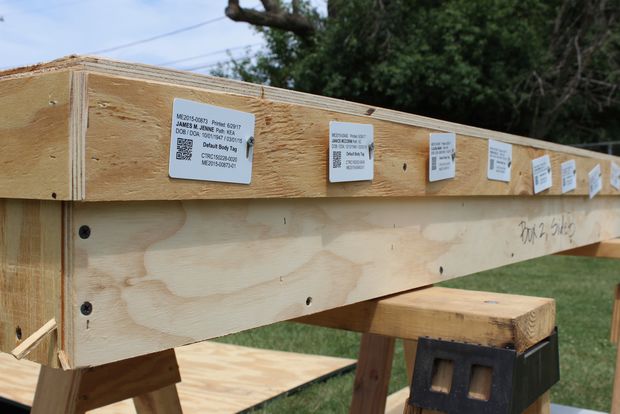 The caskets buried Thursday at Mount Olivet Cemetery in Mount Greenwood were all marked with small white cards that included a date of birth, serial number and — in some cases — the name of those inside. [DNAinfo/Howard A. Ludwig]

Dr. Ponni Arunkumar, the county's chief medical examiner, said it takes six months to two years before a body is deemed "unidentified." A series of exhaustive protocols must be completed before such a designation is determined, including a full autopsy, dental exam, fingerprinting, DNA sampling and more, she said.

Unidentified remains are not cremated. But indigents are cremated and their remains are placed in a segmented coffin alongside others. In a few cases, the bodies of the poor are donated as cadavers for medical research with the family's blessing, Arunkumar said.

Fetal remains also share a casket sectioned off for each individual. These remains were collected from area hospitals and include miscarriages, abortions and stillborn babies, she said. 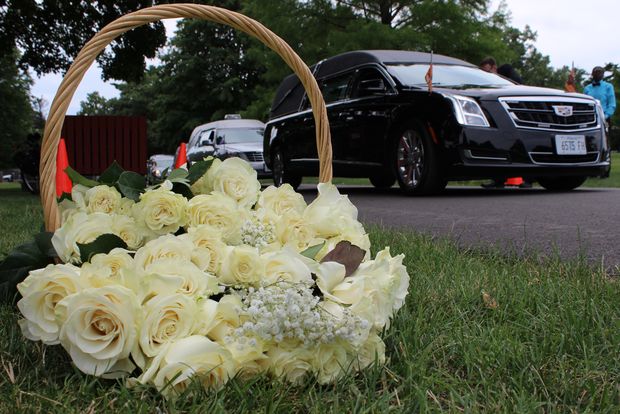 Funeral directors from throughout the region took part in the burial of unborn, unidentified and indigent people in Cook County Thursday afternoon at Mount Olivet Cemetery in Mount Greenwood. [DNAinfo/Howard A. Ludwig]

Since 2012, 57 unidentified people, 896 unborn children and 420 poor people have been buried in similar fashion courtesy of the county and Catholic Cemeteries, which operates 44 cemeteries in Cook and Lake counties.

Cupich again told those gathered for the service that the marker stands as a reminder that those on the fringes of our society join all of us in death.

"This is a monument to inclusiveness," he said.