DOWNTOWN — The developer building the supertall Vista skyscraper on Wacker Drive plans another 80-story tower nearby, the tallest in a bevy of new high-rises proposed off the Downtown lakefront.

Magellan, which has been filling out the 28-acre site since a golf course closed there in 2001, plans a 54-story hotel/residential high-rise next to Aqua tower on Columbus and is teaming up with Lendlease to build three new towers just off Lake Shore Drive.

If built, the four towers would mostly fill in the last unbuilt sites in Lakeshore East.

"It's high time we fill something in," Sean Linnane, an executive vice president at Magellan, said Monday. 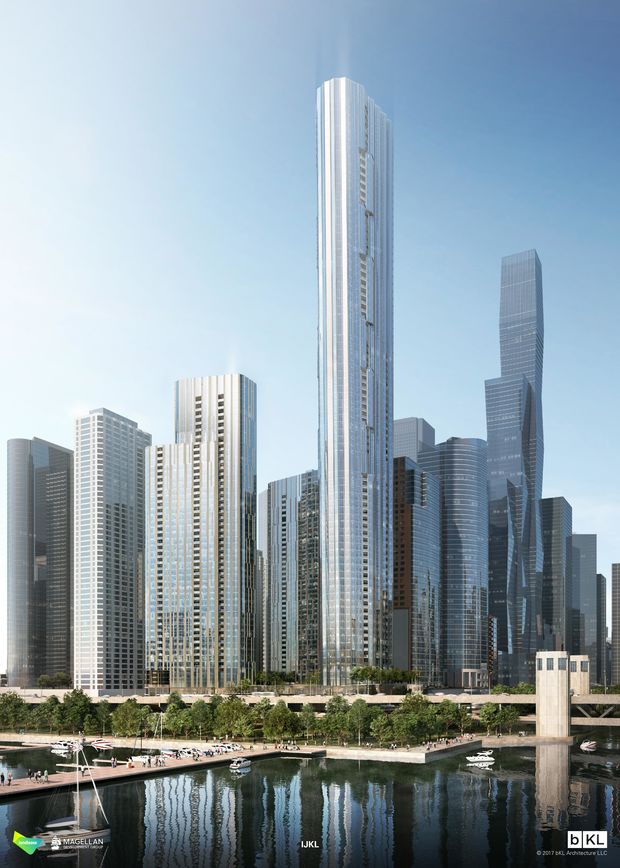 A rendering of the 80-story hotel/condo tower off Lake Shore Drive, with Vista in the background. [bKL Architecture]

Three of the towers would be built on vacant land in between Harbor and Lake Shore drives. The tallest tower would rise 80 stories and include 475 condominiums as well as a 300-room hotel, said Jack George, an attorney for the developers.

Another 50-story tower on the site would contain 400 condos, and a new 40-story tower would have 525 apartments for rent, George said. All three towers would surround a new park that connects to the lakefront and Riverwalk.

"We have to create something, as hard is it is to do, more special than the already existing (Lakeshore East) park," said Thomas Kerwin of Chicago-based bKL Architecture, which designed the proposed towers. 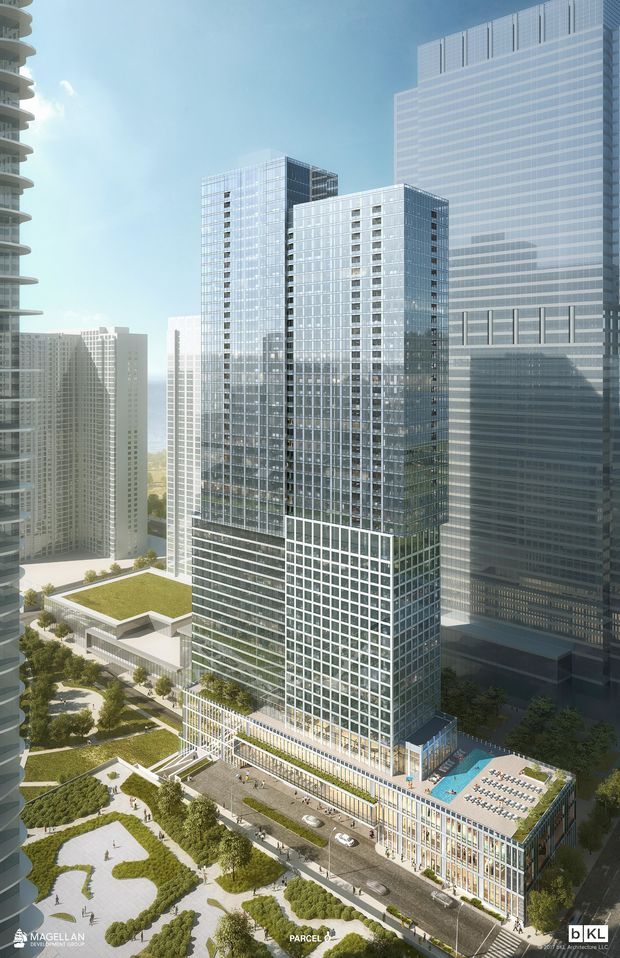 A rendering of dual hotels Magellan wants to build at 195 N. Columbus. The taller tower is about 54 stories tall.

Magellan also wants to build a pair of new hotels at 195 N. Columbus next to Aqua tower. One hotel would be full service while another would include smaller "micro" hotel rooms and less amenities. The 54-story tower would also include 643 high-rise homes and connect to the Downtown Pedway, the developers said.

The projects are the biggest proposed by Magellan since the developer broke ground last year on Vista, the 94-story skyscraper that is projected to be Chicago's third-tallest tower by the time it opens in 2020 near Wacker and Columbus drives.

The developer's ambitious proposals drew hundreds of feisty Lakeshore East neighbors concerned the new buildings will affect their views, property values and neighborhood traffic. Some in the crowd who had bought into Magellan buildings years ago felt betrayed by the developer's plans, while another said the rash of recent crime on Lower Wacker Drive is concerning enough to give the project pause.

"It is hard to imagine so many more dwellings to prospective residents if they knew of the hellish conditions under their feet," said Betsy Beckman, who has lived in the tower at 400 E. Randolph St. for 12 years. "There's no need to wait. These problems exist today."

Monday's presentation at the Hyatt Regency hotel on Wacker was hosted by Ald. Brendan Reilly (42nd), who likened Magellan's attempt to please neighbors spread across more than a dozen nearby towers to squeezing a balloon.

"You shift views around here and someone else gets upset," he said. 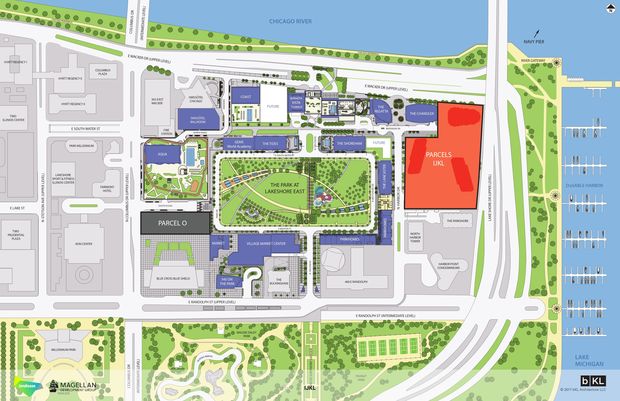 A map showing the site of the three proposed towers in red and Parcel O, where the dual hotel tower would be built.

Magellan opened its first Lakeshore East tower in 2005 and seeks city approval for its latest plans because they require an amendment to its previous zoning agreement with the city. The city previously agreed to let Magellan build four buildings on the site where it now proposes three towers. The new arrangement will allow for more public, open space and inhibit neighboring views less, the developers said.

The previous zoning agreement also calls for a new public school to be built by Magellan. While an L-shaped parcel between Magellan's Shoreham and Lancaster towers off Harbor Drive is being held for a future school, Reilly said Chicago Public Schools doesn't believe it has the funding or neighborhood demand yet to pursue a new school there now.

Monday was the first public presentation by Magellan and Lendlease, which will likely have to meet with neighbors again before receiving city approval for their plans. The developers said they would start construction within a year if the projects are approved.

Click the slideshow above or scroll down below for more early looks at the big proposed development: 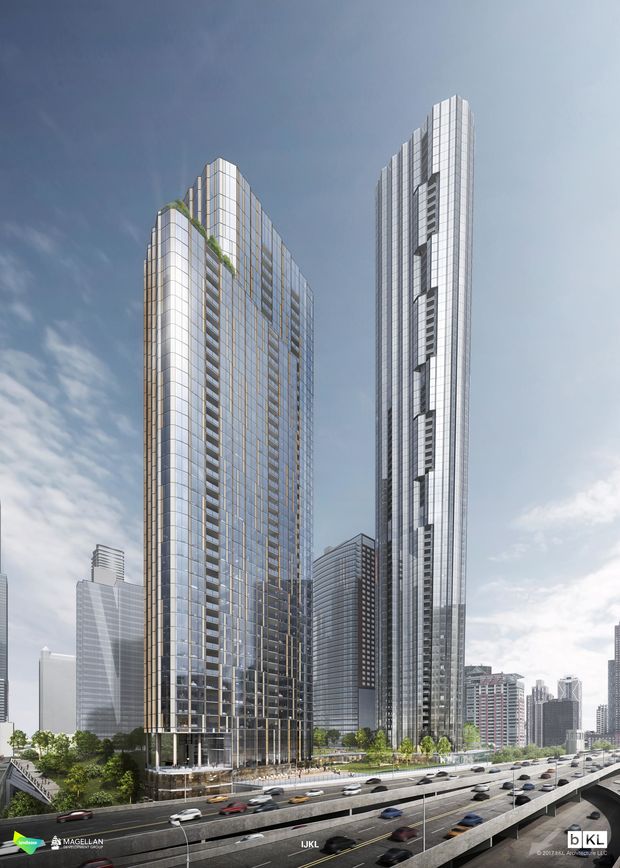 Looking northwest from the Drive at the 50 and 80-story towers. [All renderings by bKL] 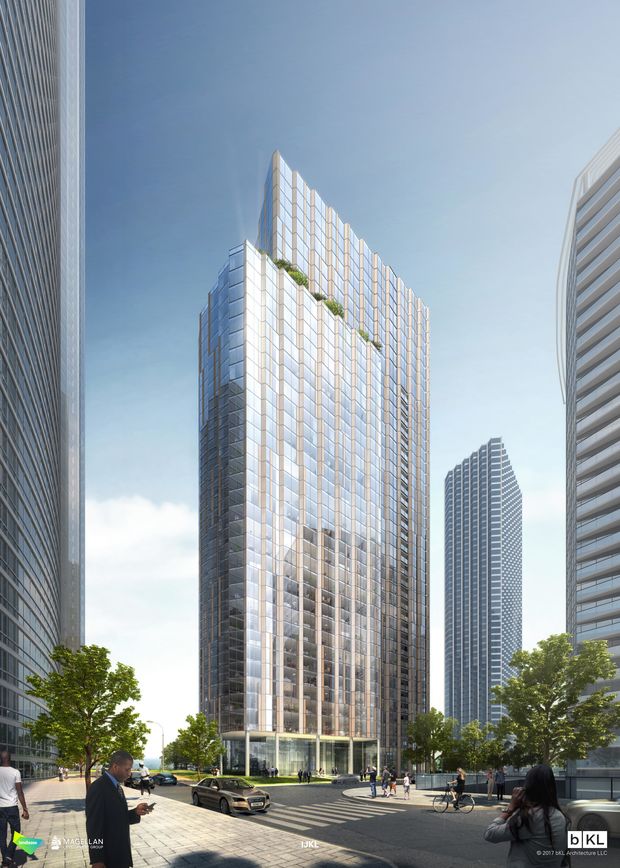 This 40-story apartment tower would be the shortest of the three new buildings on the eastern end of Lakeshore East. 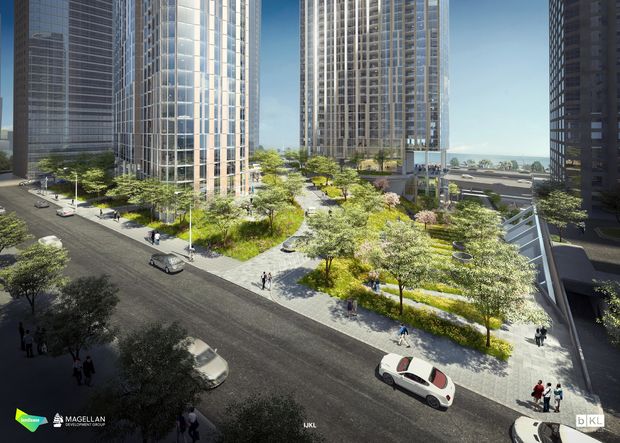 Looking east from Harbor Drive at the three new towers and park. 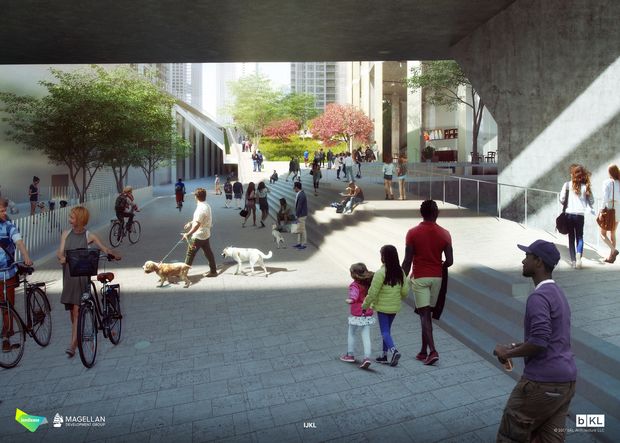 A dog park would occupy the southeastern end of the site. 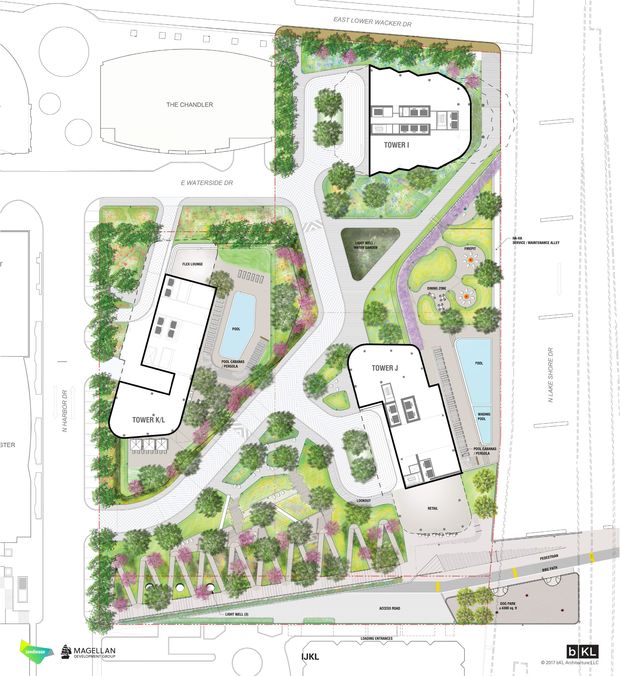 The site plan for the three new towers. 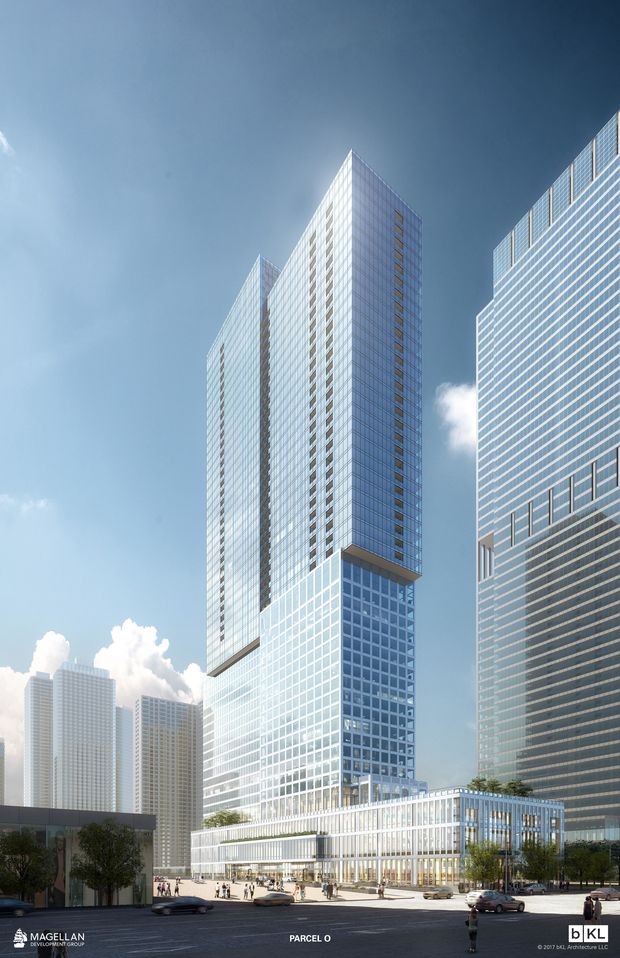 Looking at the new dual hotel tower from Columbus Drive. 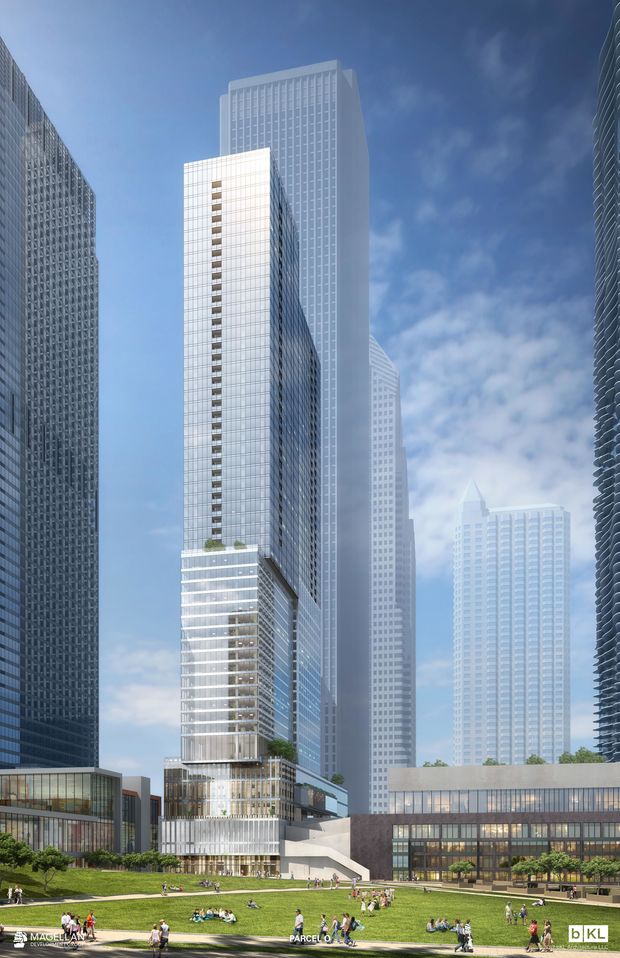 The view from Lakeshore East park. 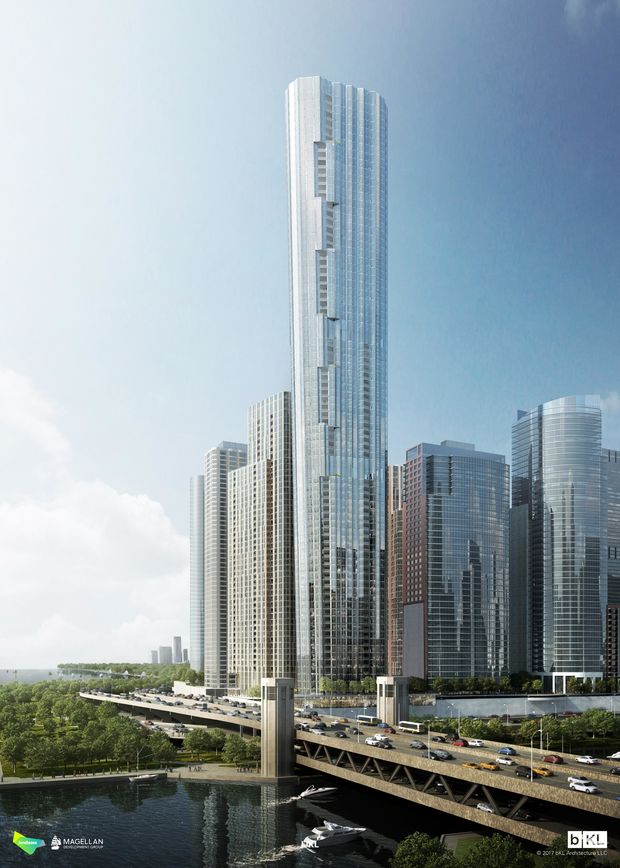 Another view of the 80-story tower.