By Howard Ludwig |&nbspJuly 6, 2017 8:40am
@howardaludwig
Twitter Facebook Email More
The fourth annual Papa Hops Tournament will return July 14 to Kennedy Park and is making a name for itself among 16-inch softball enthusiasts throughout the city.
View Full Caption
Supplied Photo

MORGAN PARK — The fourth annual Papa Hops Tournament will return July 14 to Kennedy Park and is making a name for itself among 16-inch softball enthusiasts throughout the city.

Liam Hopkins, 24, of Morgan Park started the tournament along with his brothers, Tommy, 28, Martin, 26, and their friends to honor their father Tom "Papa Hops" Hopkins, who died in 2014 as a result of melanoma.

The tournament is primarily played at the park at 11320 S. Western Ave. in Morgan Park where Tom Hopkins watched his children play sports. Hopkins, 59, also ran a Sunday softball league at the park and was a co-owner of J.P. Hopkins Sewer and Water Contractors.

The St. Rita Fathers' Club will make burgers and hot dogs for the tournament. The tournament will also have various raffles throughout the evening and is expected to again draw nearly 2,000 people.

"You're out with everyone. The lights are on. The scoreboard is on, and it is just a fun-filled event," Liam Hopkins said Wednesday.

The tournament has raised nearly $60,000 for charity since its inception. Most of the money is given to area families with children who have been diagnosed with cancer. Proceeds from the tournament have also been used to buy a scoreboard at Kennedy Park for neighborhood Little League and football teams.

This year the tournament will support the family of Lucy Spokas, a 1½-year-old girl from Naperville who is battling a brain tumor, said Liam Hopkins, adding that Lucy's father Tim, an Evergreen Park native, will be on hand to throw out the first pitch.

St. Rita alumni and Super Bowl champion Darius Fleming as well as NFL draft pick Pat O'Connor will also be there for the opening ceremonies, which last year included a helicopter flyover.

The tournament is capped at 28 teams, which is largely due to the time constraints of a Friday evening event. The first- and second-round games begin at 5 and 6 p.m. and are played at Kennedy Park and Mount Greenwood Park at 3721 W. 111th St.

From there, all games move to Kennedy Park with the championship game usually beginning at 9:30 p.m. Twenty five of the teams in the tournament have returned from last year, leaving just a small window for new teams to join, Liam Hopkins said. 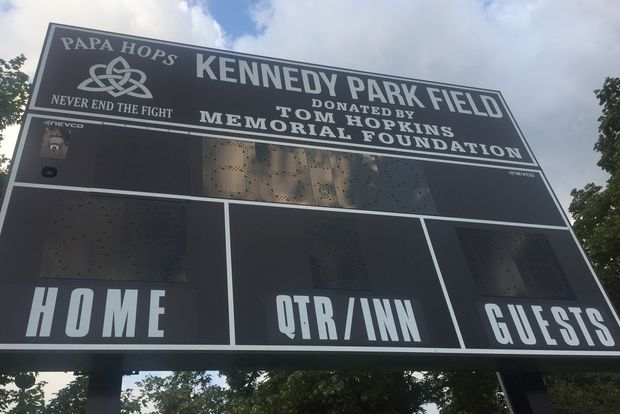 Proceeds from the Papa Hops 16-Inch Softball Tournament were used to purchase a scoreboard at Kennedy Park. The board is used in the tourney as well as by local Little League teams and the football program at St. Cajetan School. [DNAinfo/Howard A. Ludwig]

"We have a wait list of five teams. Every year, more people are trying to come on," said Liam Hopkins, who added that he's been contacted by organizers of the Slow-Pitch Softball Association and others with inquires about the success of the Papa Hops tourney.

"It's turned into one of the best tournaments in Chicago," he said. "What's able to make it go on is not just the guys organizing it. It is the neighborhood and the community supporting us."

It costs $375 to enter a team into the tournament and nearly all of the teams are from the South Side or the nearby south suburbs. The winners of have returned the prize money each year, Liam Hopkins said.

"I feel like this year especially it is going to ba a great year," he said.