The event that sends cyclists along a one-mile loop through the tree-lined streets of Beverly drew 3,000 people last year, mainly converging in the spectators' area on the grounds of Beacon Therapeutic Diagnostic and Treatment Center.

The 15th annual bike race kicks off the Prairie State Cycling Series Intelligentsia Cup — a 10-day series of races held at different locations throughout the Chicago area. Other races in the city will be held Monday in South Chicago and the final race July 23 in West Town.

The race in Beverly at 10650 S. Longwood Drive is popular among racers as it features steep hills and strong community support. There will be four different races throughout the day, and a suggested donation of $5 is asked of those entering the festival area. 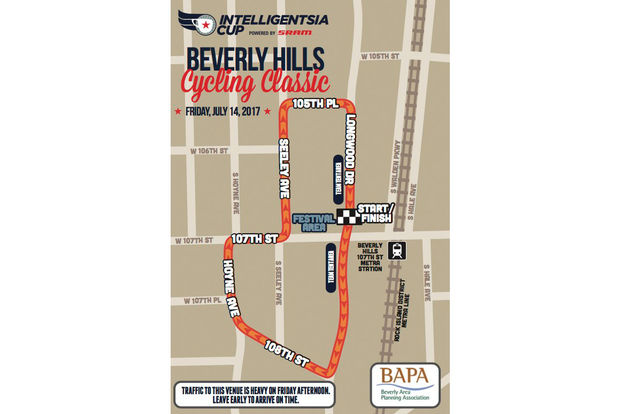 The map of the Beverly Hills Cycling Classic shows how riders will loop through the tree-lined streets of Beverly from 4-10 p.m. Friday. [Supplied illustration]

Lagunitas Brewing Co. will be the beer sponsor. Other microbreweries pouring beer at the bike race also include Argus Brewery and Baderbrau Brewery.

"What people like is a variety and to try all these different types of craft beers," said Holland, who added that wine and pop will also be available.

As for the food, Calabria Imports will bring its new food truck to the race. Pollo Locuas will serve tacos. Porkchop will sell barbecue specialties. Mikes Revenge will offer sandwiches, and Miseriacordia's Hearts and Flour will have desserts for sale.

At the playground at the top of the hill, kids will have an opportunity to play video games in a mobile trailer from Dappers Game Zone along with face painting and lessons in bike safety.

Attendees are encouraged to ride their bikes to the race, as a bike valet service will be available. At 7:05 p.m., the course will be opened briefly for a Family Fun Ride. This will allow spectators to pedal the course for free. Helmets are required for all riders.

After the final race at 8:30 p.m., the festival area will feature music by Coyote Riot.

"It will be really fun," Holland said.