DOWNTOWN — The developer building the super-tall Vista Tower on East Wacker Drive plans to build three towers and another hotel/residential project nearby.

Chicago-based Magellan Development Group will detail its plans next month for the mega-project adding more than 2,000 new high-rise homes and nearly another 1,000 hotel rooms near the mouth of the Chicago River, 42nd Ward Ald. Brendan Reilly told constituents in an email Friday.

Plans for the massive development were announced about nine months after a venture including Magellan broke ground on Vista, the 94-story skyscraper that is projected to be the city's third-tallest tower by the time it opens in 2020 near Wacker and Columbus drives.

Magellan, which is partnering with Lendlease Development Inc. on the new project, proposes three towers off Lake Shore Drive, including up to 1,400 homes, 300 hotel rooms and 30,000 square feet of retail space.

Another site near the Aon Center on Columbus would include 640 homes and two hotels with up to 626 hotel rooms, Reilly wrote. 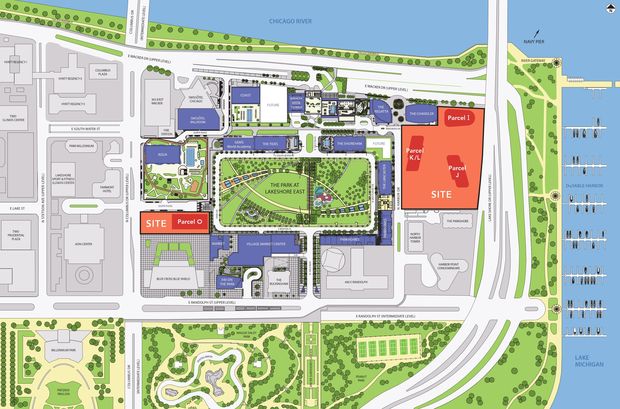 The new buildings would be the latest addition to the Lakeshore East neighborhood Magellan has been building since it opened the Lancaster condominium tower in 2005 at 201 N. Westshore Drive. Magellan and other developers have been building on the 28-acre site bound by Columbus, Lake Shore Drive, Randolph Street and Wacker since a golf course closed there in 2001.

Magellan and Lendlease will unveil their proposal, including project renderings, at a community forum starting at 6 p.m. July 10 in the Regency Ballroom of the Hyatt Regency Hotel, 151 E. Wacker Drive, Reilly said.