BEVERLY — Golf is typically a game where loud noises are frowned upon, but nobody seemed to mind when Jim Cornelison belted out the national anthem Wednesday at Beverly Country Club.

The opera singer sang both the American and Canadian anthems just before the start of a golf outing for the National Hockey League Coaches' Association, which is in town for Friday's NHL Draft at the United Center.

Chicago Blackhawks head coach Joel Quenneville is the president of the coaches' association and played host to 25 of his NHL peers, who each took the course with three other golfers. The event raises money for clinics for amateur coaches.

One such coaching clinic will be held Thursday at the Hyatt Regency Chicago. About 500 coaches from the youth level through high school and college participate in sessions that run from 7:30 a.m.-6:30 p.m.

The golf outing also supports Hockey On Your Block, an effort from the First Goal Foundation that aims to introduce the hockey to kids who might not otherwise have an opportunity to get on the ice.

Cousins Keionta and Kejuan Franklin and their pal Nehemiah Sutton have all fallen in love with the game since joining in the program. The 13-year-old boys shot pucks from wooden boards near the putting green while wearing their jerseys Wednesday. 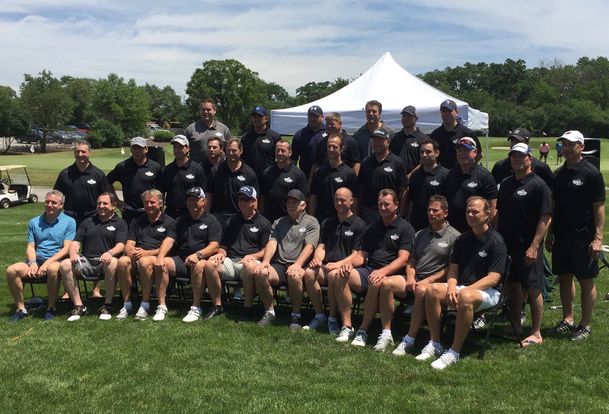 "Hockey, I guess it is more physical than most sports," said Sutton, a student at Oscar Mayer Magnet School in Lincoln Park. He added that he prefers the challenges on the ice to those in math class.

About 125 kids from kindergarten through eighth grade are involved in the program this year. They are supplied with ice time as well as equipment, said Dave Temkin, community liaison for the seven-year-old charity which primarily operates out of the Morgan Park Sports Center and the McFetridge Sports Center in Irving Park.

"This event is going to be really good. We expect to raise over $5,000," said Temkin, who added that he's recently recruited interested hockey players from Clissold Elementary School in Morgan Park. 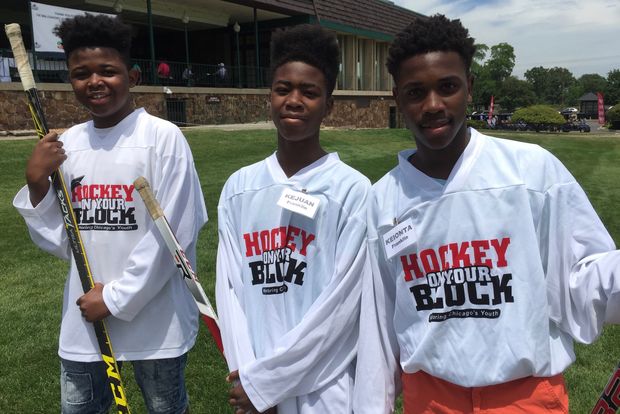 Nehemiah Sutton (from left), Kejuan Franklin and Keionta Franklin all participate in Hockey On Your Block. The effort aims to introduce the sport to Chicago kids who might not otherwise have a chance to get on the ice. [DNAinfo/Howard A. Ludwig]

As the golfers headed out on the course at 8700 S. Western Ave., Cornelison stayed behind. He's been busy in the off-season singing at various events, including his recent rendition of "(Back Home Again in) Indiana" at the The Indianapolis 500.

Cornelison said he's no stranger to the Beverly area. In fact, he used to routinely play basketball with friends on Monday and Thursday nights for about seven years at St. Barnabas School at 10121 S. Longwood Drive.

That said, he admits to never being the star of the team and blamed his shortcomings on playing football as a child.

"I played basketball like a football player," he said.