She Grew Up In A 2-Room Attic — Now She's Lake View H.S. Valedictorian

By Ariel Cheung |&nbspJune 20, 2017 6:08am
@arielfab
Twitter Facebook Email More
Magdalena Sotelo graduated at the top of her class and will attend Colorado College in the fall.
View Full Caption
DNAinfo/Ariel Cheung

LAKEVIEW — Eighteen-year-old Magdalena Sotelo has the composure of someone twice her age.

The only time it cracks is when she talks about her mom, the driving force behind the polished, poised valedictorian of Lake View High School's Class of 2017.

"Sometimes I feel sad, because I did see how hard she was working," Sotelo said with a frown. "I tried to help as much as I could, but I just ask for too much time alone in my room to do my homework, and I feel like I could have made more time to help her."

The fortitude of a single mother from Mexico who raised three daughters in Chicago has been passed on to the next generation. Sotelo graduated at the top of her class Monday and will head to Colorado College — one of the country's most innovative liberal arts schools — in the fall. She hopes to be a doctor one day.

"I see that she struggles without having gone to college," Sotelo said of her mother. "She struggled to get a job that was steady, but now she's doing really good. I need to do what she's doing now and get [a degree] and help her."

When it came to her studies, which included college-level coursework starting her sophomore year, Sotelo said she felt like working hard came naturally.

"My mom said that when I was 2, I asked her for a book bag and started school at home — I played the teacher and the student," Sotelo said. "I feel like it was just in me, but most of the time, it was also her." 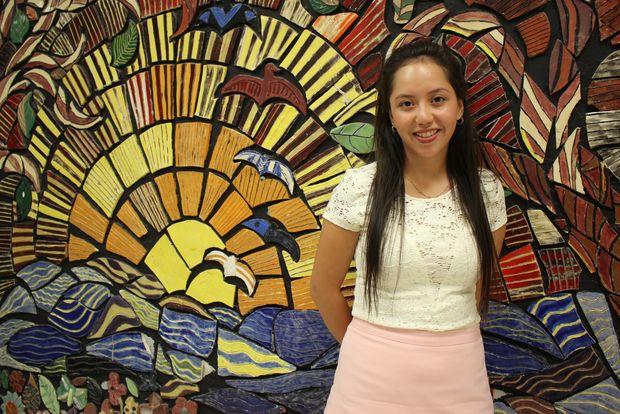 The family moved from San Juan, Calif., in time for Sotelo to start first grade at Avondale-Logandale Elementary, although she eventually transferred to Lorca when it opened in 2010 on the west side of Avondale. Her father stayed on the West Coast and remarried.

While Sotelo's mother sold cosmetics and worked for a coffee company, the four of them lived in a cramped, two-room attic apartment in Avondale. It was too loud there after school, so Sotelo set an alarm for midnight so she could do her homework in quiet.

With two younger siblings to look after, "I call myself the dad," Sotelo jokes. "I'm always telling them what to do and how to help my mom. When I was 13, I had to take care of them."

Sotelo sounds like an affectionate parent when talking about her sisters: Miriam, the free-spirited baby of the family and Brenda, a freshman at Amundsen who is already following in her older sister's pavement-pounding path.

"My mom is a little less strict on them. She says, 'Let them be, they're children,'" Sotelo said. "They're a little more open and flexible. You can see it in our rooms — Miriam's is kind of like all over the house. I'm always telling her to pick up her stuff." 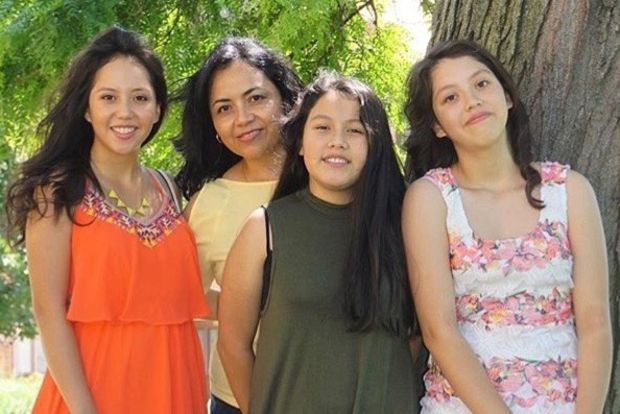 Magdalena Sotelo (left) with her mother and two sisters, whom the 18-year-old helped raise after the family moved to Chicago a decade ago. [Provided/Magdalena Sotelo]

Sotelo rounded out her education at Lake View with as many sports as the school allows students to play. She tried track and water polo and found tennis not competitive enough, but none appealed to her as much as basketball.

It taught her to be part of a team and to manage her time — "getting down to business" after taking the sometimes hourlong commute to school, staying late for practice, coming home to chores and finishing up with homework before bed.

"I like being active," Sotelo said simply. "It's not even for health reasons — it just makes me happy."

One summer, she worked with undergraduate students at Carleton College in Minnesota, putting together a research project on cancer during a three-week science institute, which helped nurture her interest in the medical field.

"Sometimes things went wrong, but I liked how they have plans and a procedure, and you know if something is right, if the outcome is what you wanted," Sotelo said. Like math, "there's always an answer to every problem," she said.

She also spent four years in the Northwestern Academy, a college-focused program for Chicago Public Schools students not attending a selective-enrollment high school.

In many ways, Sotelo's experience is ideally what educators at neighborhood schools want to see; one that is enriched, immersive and accessible.

Through the GROW Community initiative, aldermen and principals at the 17 elementary schools that feed into Lake View and Amundsen are emphasizing opportunities at the two STEM-focused neighborhood high schools. Officials hope the effort will lessen the pressure young students face in the highly competitive application progress and keep families in the area.

It was a big improvement from their old apartment, but Sotelo found her morning commute to school stretched up to an hour long with the new distance.

#CPSValedictorians No. 8 “I’m always joking around with my little sisters, saying, ‘Mom’s the mom, but I’m the dad,’” Magdalena Sotelo, the valedictorian at Lake View HS, on Chicago’s North Side, says. Her mother is flexible, relaxed; Magdalena, on the other hand, writes out an agenda for herself and sticks to it. She says she’s had to set priorities—she played 3 sports a year, took numerous AP courses and a college-readiness program through Northwestern University. She’s been mentoring Lake View freshman too. “I tell them to get involved with what the school has to offer and don’t just settle for the minimum. You find what you like to do, and it’s also a way to learn how to manage your schedule, even if you don’t have time.” The picture she is pointing to shows her with a grade-point-average of 5.0816 out of 4. Magdalena says that she and her mother and two sisters and their pit bull moved recently from an attic apartment. It was too loud there to do her homework after school, so she’d set an alarm for midnight and start when everyone else was asleep. Originally from San Jose, she wanted to go west for college. She picked Colorado College after visiting the school with her mother. Magdalena is a little concerned about the lack of diversity there. During a fly-in at another campus, she met 2 other Mexican-American girls touring the school from Arizona. They told her that after Trump’s election, they didn’t feel safe in their own high school. “I know that I will have to find clubs or just groups of people on campus who will be going through what I’m going through,” Magdalena says. “I’ll have to create an atmosphere there.” --@ben_austen instagram.com/etcetras #More2Chicago #CPS #Chicago #valedictorian #journalism #profiles #LakeViewHS #ColoradoCollege #NorthwesternAcademy

It didn't faze her, and the dedication has paid off.

As valedictorian, Sotelo was one of 20 CPS graduates that Chicago journalist Ben Austen profiled on Instagram.

At Colorado College — in a spot scenic enough to inspire the lyrics to "America the Beautiful" — she plans to study molecular biology and Spanish communications. One of 13 Lake View seniors graduating with a seal of biliteracy, Sotelo said she hopes a minor in Spanish will make it easier for her to help bridge the gap for Spanish speakers like her mom.

That challenge could come sooner than expected for Sotelo, who is heading to a small private college where 2 out of 3 students are white. Fewer than 1 in 10 are Hispanic or Latino like Sotelo.

With political animus blasting from TV screens and Twitter and the Latino community in the crosshairs, Sotelo said she is nervous about facing challenges that she expects will come with being in a place not as diverse as Lake View.

"I think it will come out at least once," Sotelo said. "And I think that's why [the college] chose me: They want to create more diversity and find students who can take that adversity and those sometimes harsh remarks and turn them around."