CITY HALL — Ald. Anthony Napolitano (41st) moved Thursday to block construction of a 297-unit luxury apartment complex near the Cumberland Blue Line station, citing broad resistance to the number of apartments in the project, according to his staff.

Unveiled by the developer Glenstar O'Hare, LLC last December, the proposal for a new building at 8535 W. Higgins Road was set to be approved by the Chicago Plan Commission on Thursday. But Napolitano triggered a rule allowing him to delay the hearing by 30 days, and he'll ask the commission to extend the delay indefinitely, according to his chief of staff, Chris Vittorio.

The complex would hug up against Higgins Road just west of Cumberland Avenue, facing the Kennedy Expy. to the south and suburban Park Ridge to the north. It would include studio, one-bedroom and two-bedroom apartments, with the cheapest units starting around $1,200 per month.

Another developer had already scored approval to build a mixed-use project with apartments and retail stores on the site, but he backed out in 2015. Last year, Glenstar O'Hare entered into a contract with the property owners to offer their own idea, which strips out the retail and replaces it with more apartments.

Since the proposal doesn't need a zoning change, its approval doesn't hinge on Napolitano's support. Still, it's large enough to need the commission's blessing before construction can begin. 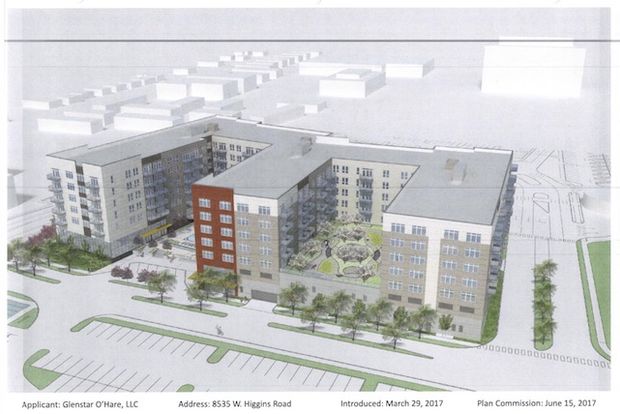 The complex would include a pool, "spa-type facilities," an "entertainment area for parties" and a "small private theater," the developer said. [Glenstar O'Hare, LLC]

Neighbors offered few critiques of the plan during public presentations in December and January, leading to an official vote of confidence from the 41st Ward Zoning Advisory Committee on Jan. 4. But flare-ups over a controversial housing proposal in Jefferson Park have shifted the landscape since then, Vittorio said.

Last month, Napolitano was the only member of the City Council to vote against a proposal at 5150 N. Northwest Hwy. in the adjacent 45th ward, bucking a longstanding tradition that give aldermen the ultimate authority over developments on their own turf.

"Based on the reaction from residents of the Northwest Side on density, right now the alderman feels the best approach is for [the Higgins Road proposal] to be deferred indefinitely." Vittorio said. "The alderman has a good gauge of how residents feel about this, and I would assume that the Plan Commission would respect a local alderman's decision."

The developer had also drawn more two-bedroom apartments into the plan since neighbors last saw it, stoking concerns that it could worsen overcrowding at the nearby Dirksen Elementary School, 8601 W. Foster Ave., which is already near 150 percent capacity, Vittorio added.

But Glenstar O'Hare co-owner Larry Debb has said the building — whose plans include a pool, "spa-type facilities," an "entertainment area for parties" and a "small private theater" — would be targeted to young professionals working near O'Hare Airport.

Mike Emerson, the chairman of the advisory committee, wrote in an email Thursday that he "support[s] [Napolitano's] decision to take a longer look at this project."

"The Zoning Committee will discuss this development with him and work to understand both his concerns and perspective," Emerson continued. "I am hopeful that a constructive compromise can be reached."

Representatives of Glenstar O'Hare did not immediately respond to a request for comment Thursday.