How Chicago’s Queer Business Owners Are Turning Pride Into Livelihoods

BOYSTOWN — In 2017, celebrating Pride with a Facebook status or rainbow flag has become all too easy — but advocates say it's not enough.

Advancing equality is about putting your money where your Pride is, says Kristen Kaza, a 31-year-old queer and femme entrepreneur, as well as others in Chicago's lesbian, gay, bisexual, transgender and queer communities.

Gay rights have come a long way since Chicago's first Pride Parade in 1970, when a few hundred marched one year after the Stonewall riots in New York City.

In recent years, parade attendance has reached nearly 1 million people and signed on mainstream companies like Uber and Pepsi. In 2015, the United States made one of its greatest strides ever when marriage equality became the law of the land.

But all of that, while impressive, is not enough, advocates say.

Despite almost a half century of progress toward equality, it remains much harder for LGBTQ folks — particularly queer people of color — to find steady employment and housing.

LGBTQ people are more likely to be poor, and transgender people of color face up to four times the national unemployment rate.

That's why supporting LGBTQ-owned businesses and going beyond a gesture of support is a vital part of being an ally, said Kaza, who owns an event production company based in Humboldt Park.

Through No Small Plans Productions and the co-working studio Reunion Chicago, Kaza seeks to prioritize and provide spaces for women, people of color and the LGBTQ community.

"It's very 'in' to be queer and aligned with queer politics and style, but it's really not enough to just love 'RuPaul's Drag Race' or go to the Pride Parade," Kaza said. "That's great, but really where the impact is made is in how I am using my resources to support LGBTQ people." 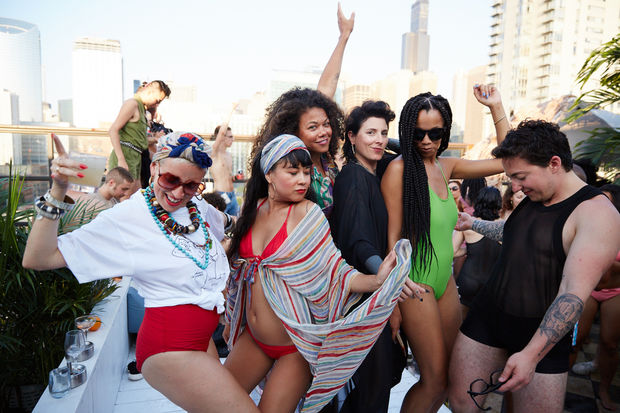 The annual Paradise Pride Party is a celebration of queer people and intersections of the LGBTQ community in Chicago. [Provided/Kristen Kaza]

There are lots of ways to do so, whether it's by establishing diverse hiring practices or partnering with companies run by LGBTQ people. Supporting queer-owned small businesses can also make a mark.

"That's how we get ahead, quite frankly," Kaza said. "Money matters, and money makes things happen. When it actually makes a difference is when you're impacting someone's life. And for an LGBTQ business owner, [their life is] their business."

Consumers looking for LGBTQ friendly businesses — which includes straight allies — can search directories from the LGBT Chamber of Commerce, GoPride.com and Windy City Times. On a state level, the LGBT Chamber of Commerce of Illinois certifies local LGBTQ-owned businesses to jumpstart partnerships with major buyers, large corporations and government agencies through its Supplier Diversity Initiative.

And while supporting these businesses for Pride Month is great, "our businesses need business year-round," said Gerardo Rodriguez, the chamber's executive director.

"Supporting LGBT-owned small businesses — our community's economic drivers — is one of the most important actions we can take to achieve a more just and equal landscape for our LGBTQ+ community," Rodriguez said. "And [it] should be practiced all year."

In Chicago, dozens of queer entrepreneurs and artists are working together to give one another a boost in business. As online retail spaces like Etsy and remote working environments expand the possibilities for a fledgling business on a tight budget, collaboratives like Provoke Culture, VAM Studio and People Who Care amplify one another within the competitive and crowded Chicago market.

Others find ways to partner, whether in carrying products that are LGBTQ produced like the Amazing Kale Burger served up at R Public House or GNAT handmade fetish gear sold at Early To Bed in Uptown.

After five years of planning large-scale celebrations for queer folks in Chicago, Kaza and creative partner Elijah McKinnon started Reunion, a studio that offers co-working space and space for women, LGBTQ people and people of color to create and exhibit art.

Kaza also does everything she can to involve people from marginalized communities in the parties she plans, using the events "as a platform," she said. 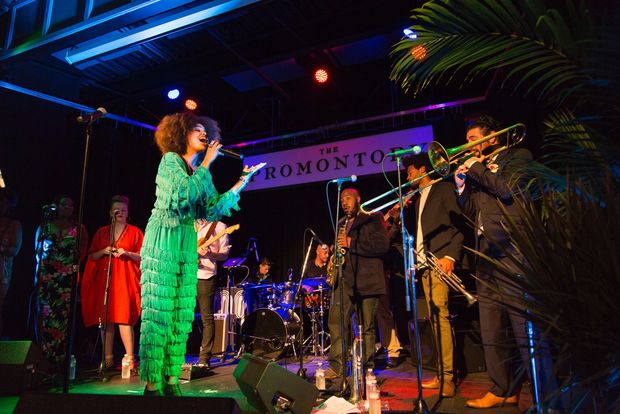 Singer Kiara Lanier performs at a past Paradise Pride Party at The Promontory. [Provided/Kristen Kaza]

Attending or supporting events like the upcoming Dance Divas, Got Her Back, Jeezy's Juke Joint and the Paradise queer Pride ball is another way to uplift the community.

There is an element of historical preservation in supporting LGBTQ businesses, said Stu Zirin, who co-owns D.S. Tequila Company and mEAT on Boystown's main stretch.

"Halsted Street has something that's very unique, and that something is the history," Zirin said. "That's why it's important to keep it going."

Starting with Little Jim's, the long-time gay bars on North Halsted Street were some of the first businesses in Chicago owned by openly gay people. Some, like Sidetrack and The Closet, have been around for almost 40 years.

RELATED: Here's Why Gay Bars Are So Important, Explained By A Chicago Gay Icon

As societal norms shifted, lines between gay businesses and straight consumers blurred to the point where now, gay people can exist in most bars without fear of violence or police brutality, Zirin said.

With fewer confines, there is less need for neighbors to patronize the gay bars on North Halsted when there are just as many gay friendly bars in Andersonville, Logan Square and Wicker Park.

"Years ago, there were lines every Saturday at every bar [in Boystown]," but that's no longer the case, Zirin said.

"The thing that's going to make Boystown stay vibrant is the tourism," Zirin said. "That's why Market Days has such a vibrant attendance. But that's also why it's important to support the LGBTQ stores and shop local when tourists are not there."