By Alex Nitkin |&nbspJune 2, 2017 11:56am | Updated on June 5, 2017 8:28am
@alexnitkin
Twitter Facebook Email More
The third rotation test would be similar to a test already underway, but it would exclude a diagonal runway that's set to be decommissioned next year.
View Full Caption
flickr/JanetandPhil

O'HARE — One of O'Hare Airport's runways is set to be decommissioned in 2018, but officials say they will experiment with new flight patterns ahead of that to help determine the effects of the strip's removal.

That plan was approved Friday by the O'Hare Noise Compatibility Commission extending a program aimed at spreading the burden of overnight jet noise around O'Hare already in effect until July.

The third round of the Fly Quiet Runway Rotation test, slated to run from mid-July to mid-October, would steer planes away from the diagonal runway that's set to be decommissioned in early 2018. The plan would instead send those flights along other diagonal runways, still largely avoiding the skies over the city's Northwest Side.

Last year, the Noise Compatibility Commission approved the first runway rotation program in the face of widespread demands that the city temper the noise from low-flying planes. Between July and December, the program directed overnight flights to change their takeoff and landing paths every week, ideally keeping any one neighborhood from being pummeled for too long.

Then, earlier this year, the commission approved a 12-week follow-up program to run between April 30 and July 16. A full schedule is posted online showing when each neighborhood and suburb will face overnight noise. 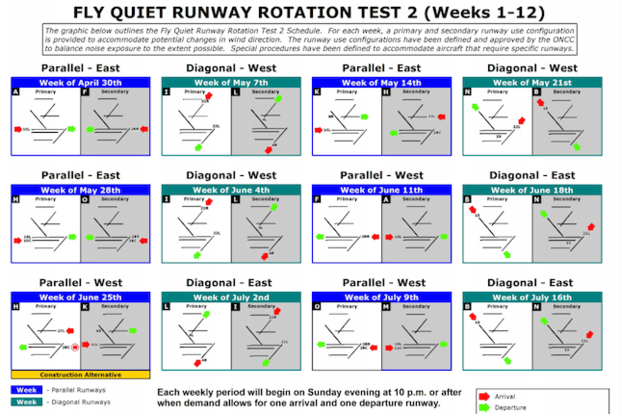 A schedule showing runway rotations during the second round of the Fly Quiet test, which runs until July 16 this year. [Chicago Department of Aviation] 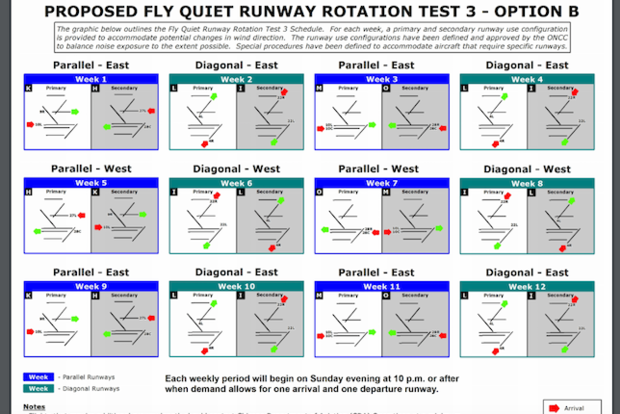 The third round of the test, set to run from July to October, would switch out two rotation patterns to exclude a diagonal runway that's set to be decommissioned next year. [Chicago Department of Aviation]

After the program expires in October, aviation officials will draw up a new rotation schedule that can span the period between the diagonal runway's decommissioning next spring and the introduction of a new east-west runway coming in late 2020, according to Aaron Frame, a deputy commissioner for the Chicago Department of Aviation. Federal law mandates that any rotation lasting longer than six months would have to emerge from an extensive "environmental impact study" of noise and flight patterns.

Frame said on Friday that testing a rotation that excludes the soon-to-be-closed runway would give researchers a better idea of how to craft the longer-term plan.

"I believe it would be very helpful for all of you and your constituents to experience what the interim might look like, so we can think about what an interim rotation might achieve," Frame told the commission Friday. "It would be one thing to run it into a computer model, but I believe there's merit in running without [the diagonal runway], so we can use that feedback to inform the modeling.

But members of the Fair Allocation in Runways coalition argued that the extra runway should remain in the mix as long as possible, writing in a statement that removing it "places an unnecessary burden on these communities in the form of wide-bodied aircraft every night of the rotation."

"We understand that something is better than nothing when it comes to relief, but it seems like each iteration brings us closer to nothing," said coalition member Dan Dwyer. "Our recommendation is that you look a little further ahead as to what this is going to look like after the next two to three years, so you can have a configuration where people can really expect some consistency."

But Ald. John Arena (45th) — who represents his ward on the 58-member commission — urged members to vote for the extended rotation, pointing to numbers suggesting that the first version of the plan suppressed noise complaints while it was in effect last year.

"The data tells us categorically that a rotation plan is effective in providing relief to constituents around the airport," Arena said. "We should move forward on this so we can get data as soon as possible for what we need to know going into spring 2018."

Data released by the commission on Friday showed that the group registered just over 20,000 overnight noise complaints from about 2,000 Chicago residents in April — almost half of them were from the city's 41st ward.