Months After Murder, Body Still In Morgue: 'We Want To Bury Our Brother'

NORWOOD PARK — Some of Nancy Jack's earliest memories of her childhood are the evenings she spent scouring the streets of Norwood Park, trying to find her little brother.

"He couldn't have been more than 3 or 4 years old, and in those days you'd just let kids roam," Jack said. "It was always my job to go find him and bring him back for dinner."

More than 70 years later, Jack is trying one last time to retrieve Loren Flensborg — known to his family as "Lori" — but under grimmer circumstances. She's caught in an unusual legal jam, with the county waiting for scientific proof that it's really her brother before authorities release his body for burial.

Flensborg's possessions were tossed outside his home after the fire. He, Jack and their two brothers had grown up in the house together.
View Full Caption
DNAinfo/Alex Nitkin

A body identified as Flensborg, 75, was found inside his home in the 5000 block of North Oak Park Avenue on April 7, recovered from the wreckage of an all-consuming house fire. He was later found to have suffered multiple stab wounds, and authorities ruled his death a homicide.

Police still are investigating the slaying, and detectives suggested at an April 25 Chicago Alternative Policing Strategy meeting that they were making progress toward identifying a suspect.

But nearly two months after Flensborg's body was pulled from the 1½-story house where he and Jack grew up together, the cadaver remains inside the Cook County Medical Examiner's Office while authorities await the results of a DNA test to confirm his identity.

In the meantime, the grieving family is waiting to be issued a death certificate, Jack said.

"It's ridiculous," Jack said. "We have all the arrangements ready, and we just want to move on. We just want to bury our brother."

The Medical Examiner's Office released Flensborg's name less than 12 hours after he was declared dead, but a later autopsy "determined that the remains were not visually identifiable and that scientific analysis was needed to confirm" his identity, according to medical examiner's spokeswoman Becky Schlikerman. 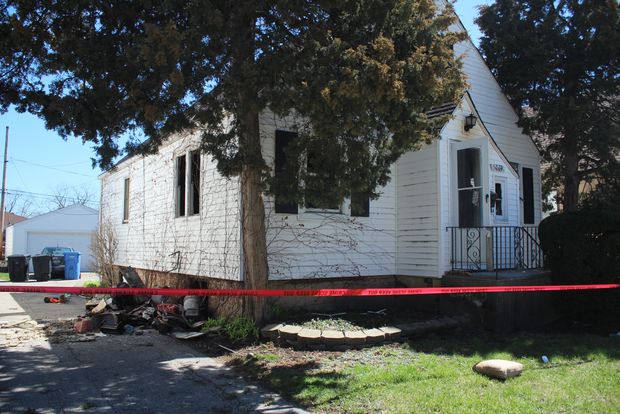 Flensborg's possessions were tossed outside his home after the fire. He, Jack and their two brothers had grown up in the house together. [DNAinfo/Alex Nitkin]

A police source said that detectives "are confident for their investigative purposes" that the body belongs to Flensborg, but that medical examiners asked police to submit a DNA test anyway.

Chicago Police took a swab of Jack's gums, and detectives told her that they'd sent it to the National Missing and Unidentified Persons System at the University of North Texas, she said.

But police clarified on Friday that the sample was actually sent to a lab operated by the Illinois State Police, where authorities said it could take up to a year for the test to yield results.

The national system in Texas stopped taking DNA samples from out of state because of a recent funding cut, according to Jose Estrada, a Chicago Police spokesman.

'I'm not sure he should have trusted them'

Jack, 83, has amassed stacks of handwritten notes over the eight weeks she's spent calling local and federal agencies in search of an explanation for the delay. She's also hired an attorney, she said.

But the most vexing question at the heart of her own amateur investigation is why anyone would want to end her brother's life.

"He was quiet and gentle — he wasn't a violent man at all," Jack said. "We didn't know at first that there was foul play, so when we found out he'd been stabbed to death ... we just couldn't understand it."

Jack found a charred copy of the book "Treasure Island" among the wreckage of the fire.
View Full Caption
DNAinfo/Alex Nitkin

Having spent most of his career as a carpenter and real estate investor, Flensborg still owned four properties around Wrigleyville when he died. He seemed to "make friends with everyone" in his buildings, at one point bringing famed Cubs fan Ronnie "Woo Woo" Wickers to dinner at Jack's home in suburban Palatine, she said.

Several of Flensborg's neighbors described a quiet and kindly homebody who was quick to lend his lawnmower or help with a household chore. He was often seen hosting two younger children whose mother was a tenant in one of the apartments he owned.

"They came over a lot, and he would take them out for the day, to Chuck E. Cheese or wherever," said Joan Craig, who spent 52 years living next door to Flensborg on Oak Park Avenue. "Anything they pointed their finger at, he would buy them."

In the months leading up to his death, Flensborg often complained to Craig about tenants who owed him money, she said.

Detectives have assured neighbors that the slaying was not a random attack, and Jack is convinced that her brother was killed by someone he knew, she said.

"He helped a lot of people in that neighborhood, and he made a lot of friends," she said. "Looking back, I'm not sure he should have trusted them all."

Days after the slaying, firefighters let Jack and other family members pick through the remains of the Flensborgs' longtime home.

She found a cabinet full of smashed china, a pastoral painting passed down from their uncle and a charred copy of "Treasure Island" — which she remembered her brother reading as a wide-eyed young boy.

Jack took the mementos home with her, but without access to Flensborg's will, she doesn't know if she'll be able to keep them. She's also eager to find the deeds to the four properties he owns — until a death certificate is printed, Flensborg still is legally responsible for managing the buildings. 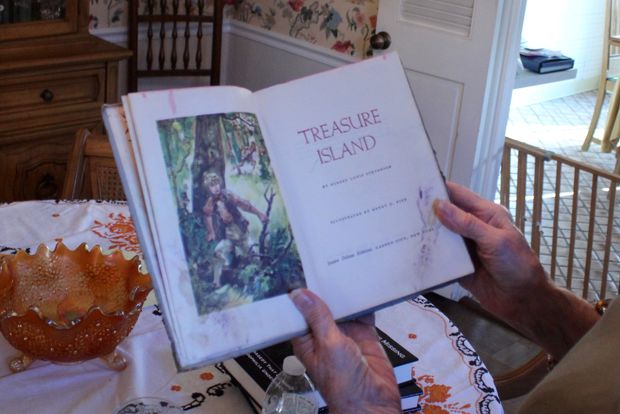 Jack found a charred copy of the book "Treasure Island" in the wreckage of the fire. [DNAinfo/Alex Nitkin]

While the family waits and the police investigate, Flensborg's big sister will keep filling her ledger with notes and phone numbers, pushing to pry the documents loose so she can help narrow the search for a killer.

She sees the dogged work as a way of channeling her late husband, James Jack, who worked as a Chicago Police homicide detective before his death in 2010, she said.

"I know I'm relentless, but I'm just trying to be an advocate for my brother," Jack said. "I'm thinking that if my husband were still here, this is what he would be doing."