BEVERLY — Jeff Deutsch and May Yen lived in Oakland, Calf. before moving to Beverly and often went days eating only what grew in their yard.

A typical meal might include fresh-squeezed orange juice from the tree in front of their house, eggs from the chickens in the backyard and asparagus from the garden, said Yen, adding that store-bought beans and grains were among the few "cheat" foods.

The couple quickly learned that the climate in Chicago wouldn't allow for such a meal upon moving here in summer 2014. But that hasn't stopped them from staying in touch with nature through their diet as well as efforts to reduce waste and their many pets.

"It's a respect for the process of creating food and doing it in harmony with where we live," Deutsch said of his and Yen's shared philosophy.

It's in an effort to further share this way of thinking the pair began growing heirloom plants from seeds. They start growing the plants in February in their house and later move them to the greenhouse they built in 2015 alongside the garage. The plants are finished outside in the backyard.

They grow about 60 varieties of seedlings and sell them for $3 each at the nearby 95th Street Farmers Market. The plants are for sale beginning on Mother's Day. This year, all sales will wrap up Sunday.

"It's a labor of love," Yen said. "I really want people to try to grow something."

Yen, a San Francisco native, expects to nearly sell out this year. Even still, the proceeds from the farmers market will mostly just cover expenses. She donated the unsold seedlings last year to the garden club at Kellogg Elementary School in North Beverly.

Erin Healy Ross is the executive director of the 95th Street Beverly Hills Business Association, which organizes the local farmers market. She said the seedlings have become increasingly popular among regulars.

"Several customers who purchased seedlings from them last year made a point of seeking me out later in the season to ask me to let May Yen and Jeff know how happy they were with the plants that grew from the seedlings they had purchased earlier in the season," Ross said. "One woman commented that the end result was the best tasting tomatoes she had ever had."

But growing and sharing seedlings is just one aspect of the eco-friendly lifestyle shared by the couple, who met while working at Barnes & Noble. They also have five chickens in their backyard, along with two pet pigs, two dogs and a cat.

The potbelly pigs came as a result of Deutsch landing a job as director of The Seminary Co-op and 57th Street Books in Hyde Park. Yen agreed to move only after being promised the pigs, which arrived in January and are named Vashti and Darcy. 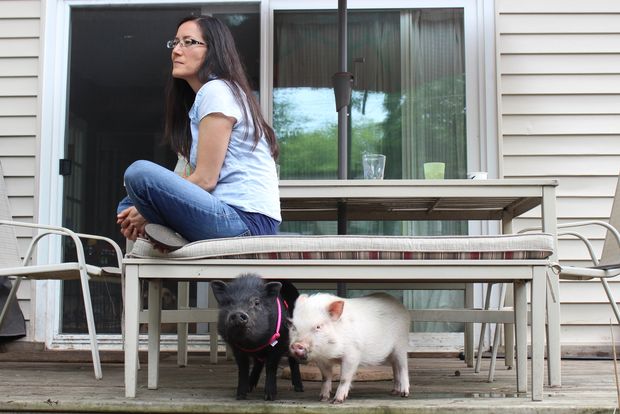 Vashti (left) and Darcy are pet pigs belonging to May Yen of Beverly. She and Jeff Deutsch also have five chickens, two dogs and a cat in their backyard. [DNAinfo/Howard A. Ludwig]

Meanwhile, Yen, who works as a manager of the Barnes & Noble store in west suburban Oak Brook, is also an avid vermicomposter. This composting system relies on a worms to break down organic waste, which they store in their basement.

Then, there are the chickens that arrived as chicks in 2015. They still lay an egg each day, which prompts the couple to give away many eggs to friends and neighbors. Yen also said she bakes often to use up the eggs.

Yen and Deutsch are not vegans, as both eat eggs from their chickens. They also eat honey and wear leather. But they both rely on a plant-based diet — without meat or dairy products.

"It's the idea of getting way from processed food," said Deutsch, a native of the New York area. 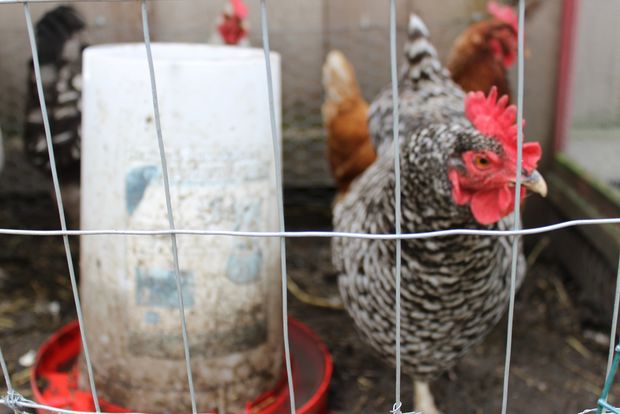 May Yen and Jeff Deutsch of Beverly have five chickens in their backyard. The 2-year-old hens each lay about one egg per day, Yen said. [DNAinfo/Howard A. Ludwig]

To that end, Deutsch said he also has a grain mill that is attached to a pedal bike. This device is used to make wheat, rice or chickpea flour. Yen said she also makes products such as toothpaste, dish detergent and other cleaning supplies from raw materials including baking soda and Borax.

But don't expect a lecture if you approach Deutsch while eating fast food. He and Yen said they are not about preaching their philosophy. Instead, they'd rather focus on helping curious gardeners.

"We are not looking to convert people," Deutsch said. "We are not fanatic about it. We are not purists." 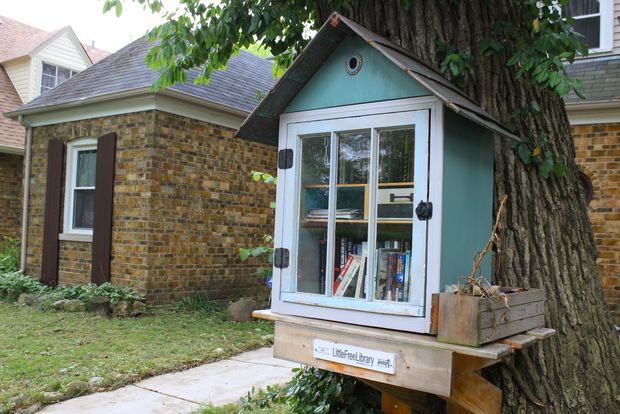 May Yen and Jeff Deutsch both work in bookstores and often stock the Free Little Library in front of their house with advance copies of books they receive in the store. [DNAinfo/Howard A. Ludwig]

Deutsch and Yen also have made an effort to share their interest in books by installing a Little Free Library in front of their home at 1611 W. 105th Place. It was among the first additions to their Beverly home.

They both often come home from work with advance copies of books and regularly use these "gems" to stock the modest library hung on a tree near the sidewalk.

Thus far, the couple are happy having moved to Beverly from the West Coast. Despite the climate, they said the diverse neighborhood offered an affordable home with enough room for their varied outdoor interests.

"We wanted something with a backyard and some land," Deutsch said.