DOWNTOWN — A River North restaurant and bar is facing the potential loss of its liquor license — and possible closure — while fending off complaints that its new, lengthy dress code is "racist."

The Bottled Blonde, 504 N. Wells St., has been criticized by neighbors for unruly patrons spilling out into the neighborhood and went through disciplinary hearings at City Hall last year. Now the city is trying to possibly revoke the bar's liquor license, with a hearing set for Tuesday.

The city alleges the Bottled Blonde sold alcohol as its primary activity but didn't have a tavern license, failed to keep patrons trying to get into the restaurant in a single line of no more than 25 people, and didn't monitor its exterior to reduce noise, littering and public intoxication, among other things.

The restaurant and bar, which has a club-like atmosphere at night, has been investigated by the Department of Business Affairs and Consumer Protection several times, said Ald. Brendan Reilly (42nd). The Bottled Blonde has "generated hundreds of complaints" from people in the neighborhood since it opened, he said.

The restaurant most recently came under fire this week after its new dress code went viral online. The lengthy dress code bans patrons from wearing "obnoxious" prints, "odd-colored" pants, Jordans, men's jewelry and other items. Reilly has long been skeptical of the business, which he says clearly operates as a club, claiming to be primarily a restaurant:

How many "restaurants" offer tableside bottles of vodka & need to post a "dress code" longer than the Magna Carta? 🤔 pic.twitter.com/SlZGuRtt0Z

Scroll down for the full dress code

People flooded Bottled Blonde's social media pages, leaving it poor Yelp reviews and taking to Facebook and Instagram to slam the policy and restaurant. Many said the policy was "racist" and not fairly applied, pointing to photos from the restaurant's Facebook that show servers in lingerie or leotards and patrons — many, though not all, white — wearing items that are supposedly banned in the dress code.

Representatives of the Bottled Blonde have not responded to repeated requests for comment. The restaurant removed posts criticizing its dress code policy from Facebook. At the bar Thursday afternoon, a manager who only identified himself as Rich declined to comment on the dress code or the upcoming hearings.

The deleterious impact/public nuisance hearings typically provide a platform for community members to voice their complaints to the city's Department of Business & Consumer Affairs, and can even lead to a business losing its liquor or business license if conditions don't improve. 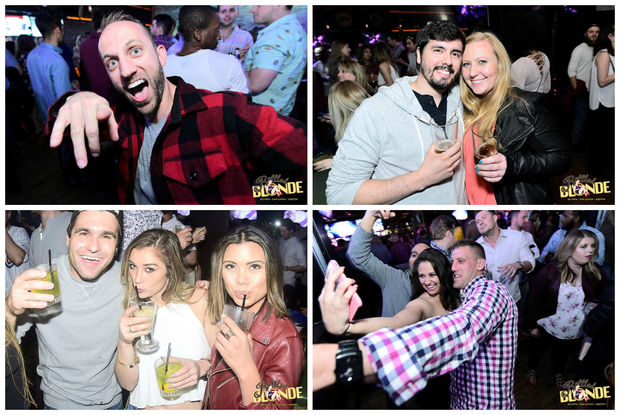 Photos from Bottled Blonde show people wearing items that were apparently banned in their controversial new dress code. The photos were posted May 23. [Facebook/Bottled Blonde] 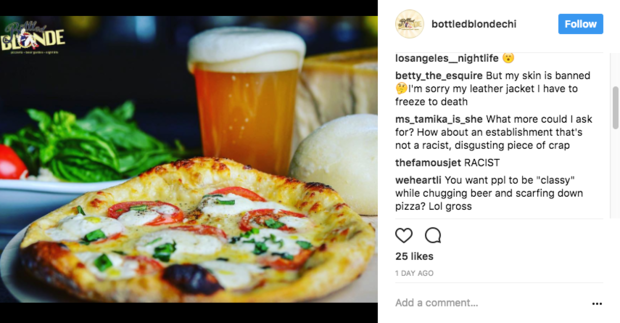 The Bottled Blonde's social media accounts, including Instagram, have been flooded by comments criticizing its dress code as "racist." [Instagram]