THE LOOP — City Hall says it's found a developer willing to bring new life to a pair of State Street buildings that aren't so great.

The city said in March it aimed to broker a sale of the buildings, which are owned by the federal government. The feds acquired the buildings at State and Adams streets in 2005 with plans for a new office complex near the Everett M. Dirksen U.S. Courthouse, but the complex was never built.

About 25,000 square feet of new shops will occupy the buildings' ground floors, according to the announcement.

Emanuel said Thursday that the project will deliver about $4.4 million to the city's Neighborhood Opportunity Fund, which finances commercial developments on the south and west sides of the city, and about $5.7 million into the city's affordable housing fund.

The project will generate at least 100 permanent jobs as well as 200 temporary construction jobs, Emanuel said.

CA Ventures is set to pay about $10.4 million for the buildings. The final price and other terms of the sale must be approved by the General Services Administration and city council.

The towers made Preservation Chicago's list of most endangered buildings twice: in 2011 and 2013.

Along with other Loop buildings, the towers are part of an informal "terracotta district" that made up Chicago's "real White City," in reference to the legendary makeshift city constructed for the 1893 World's Columbian Exposition in Chicago, said Ward Miller of Preservation Chicago.

The Century Building was built in 1915 at 202 S. State. Designed by Holabird & Roche, the 15-story tower has an ornamental facade featuring shields with dragons and other motifs offering a rare example of the Portugese-inspired Neo-Manueline style, according to Preservation Chicago. The building's thick vertical lines "portend the transition from the Chicago School buildings of the late 19th Century to the Art Deco of the 1920s," Preservation Chicago said.

The tower was home to an eclectic mix of offices and shops run by furriers, tailors, lawyers and dentists. It got its name when Century Trust and Savings Bank signed a 20-year lease for the second floor in 1917, Preservation Chicago said.

The Consumers Building next door was built in 1913 at 220 S. State St. Regarded as an example of the Chicago School, the 21-story steel-and-terracotta tower has less frills on its facade than the neighboring Century Building, but its lobby featured terrazzo floors and Italian marble walls and ceiling.

The vacant towers are better known now for their a large mural at the corner of State and Adams.

CA Ventures, among other endeavors, recently completed an apartment conversion of the landmarked Old Colony Building near Dearborn and Van Buren streets. The developer could not be immediately reached for comment Thursday morning. 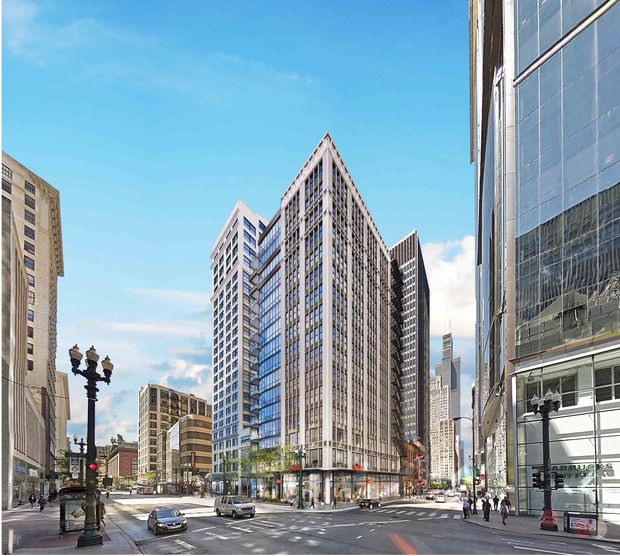 Another rendering of the new-and-improved towers. [Courtesy of Mayor's Press Office] 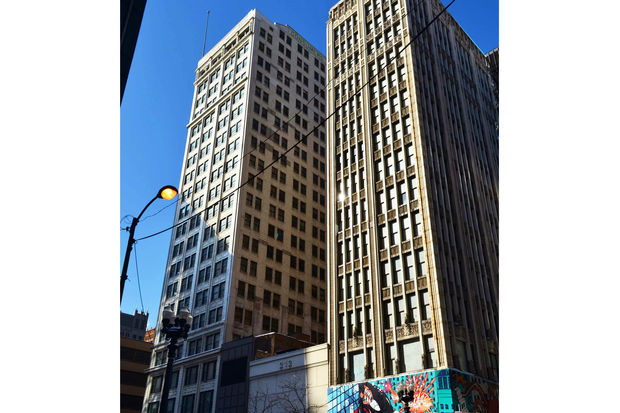 The towers as they currently look. [City of Chicago]