By Alex Nitkin |&nbspMay 31, 2017 6:06am
@alexnitkin
Twitter Facebook Email More
No one was hurt in the fire, which was reported at 11 p.m. Monday night.
View Full Caption
Natalie Kata

Around 11 p.m., police responded to the fire in the 5800 block of West Cornelia Avenue, according to Officer Kevin Quaid, a Chicago Police spokesman. No one was injured, Quaid said.

Police believed the fire started in a trash can near the garage, Quaid said.

Zahwa Alhasan was on her way home from her mosque with her parents, nephew, sister and two nieces when a neighbor called to tell her what happened, she said.

"By the time we got home, all the neighbors and firefighters were already there," Alhasan said.

The garage was almost totally destroyed on Tuesday, with melted toys and tools strewn around the surrounding alley. There was no car inside the garage, but it had been filled with other household odds-and-ends, Alhasan said.

Several electric wires were also damaged in the fire, according to Larry Langford, a Chicago Fire Department spokesman.

The fire remains under investigation, but it was not being investigated as an arson on Tuesday, Langford said.

Alhasan, whose family has lived in the house since 1997, had no reason to suspect foul play, she said.

"All our neighbors are good people," Alhasan said. "We don't have any problems with anybody." 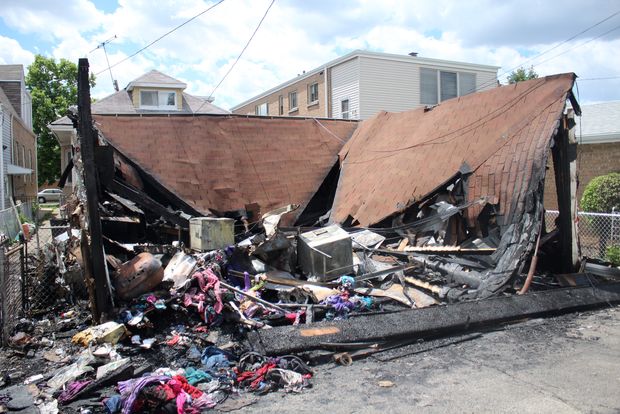 The remains of the garage on Tuesday [DNAinfo/Alex Nitkin]