DOWNTOWN — Amtrak and City Hall have picked a developer for a colossal redevelopment of Union Station, a more than $1 billion endeavor that calls for five new high-rises as well as public plazas and a swanky food hall.

If built, the development would add 3.1 million square feet of new commercial space to the area and generate 7,000-8,000 permanent jobs, Emanuel said Thursday.

Riverside recently finished a 54-story office tower at 150 N. Riverside Plaza and plans a 51-story tower on the Chicago River next to the Civic Opera House.

"This is an asset that's truly irreplaceable," John O'Donnell, Riverside's chief executive officer, said at Thursday's press conference. "This will really be a magnet for businesses coming to Chicago ... this should be the place they want to land."

O'Donnell is joined in the venture by Convexity Properties, another local developer that recently opened the Robey Hotel in Wicker Park and is building a Viceroy Hotel in the Gold Coast.

The initial renderings show plans for a pair of new residential towers atop the station's headhouse, which contains the station's storied Great Hall but lacks the vibrant retail Amtrak and city planners seek in the building. The headhouse was built in 1925 and occupies an entire city block.

A 350-room hotel would also occupy the headhouse's upper floors, O'Donnell said. A new, upscale food hall would open in the headhouse along Clinton Street, the renderings show: 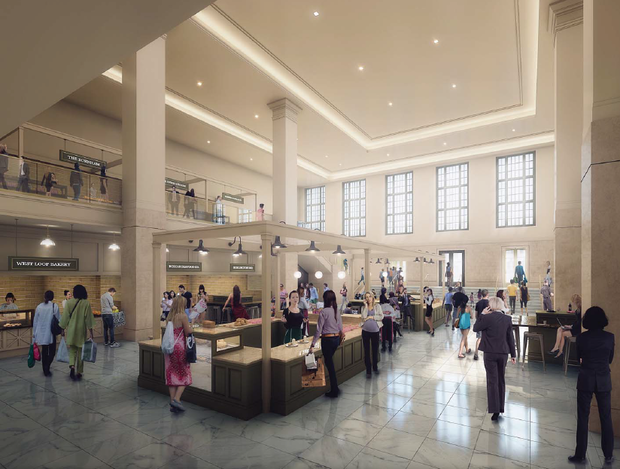 [All renderings by Goettsch Partners]

To the south, Riverside envisions expansive new public plazas and rooftop gardens surrounding two new office towers. The project's third phase calls for another residential tower built over active railroads. A 1,600-space parking garage would be demolished to make way for the new towers, which would house 800 parking spaces.

City Hall for years had sought a developer to redevelop the aging train station and surrounding properties as it looks to revitalize the otherwise stodgy cluster of office buildings just west of the Loop. The owner of Willis Tower plans a $500 million renovation a block away from Union Station, and the city opened a new bus depot last year across the street. A New York developer is working to redevelop the long vacant Old Main Post Office, which sits nearby.

Moorman called the Union Station project an "archetype" for what the train company wants to do at stations across the country.

Rahm says Union Station was final piece of Burnham's plan. It's good to be nostalgic but city now has "8,000 job reasons to look forward."

Riverside's plans are still subject to community presentations and city approval. News of the project arrives as Chicago faces its third straight year of population loss.

O'Donnell seemed unconcerned about the city's population flight, saying his development will serve tech workers and employees of other companies moving Downtown.

Click the slideshow above or scroll down below for more early looks at Union Station's redevelopment: 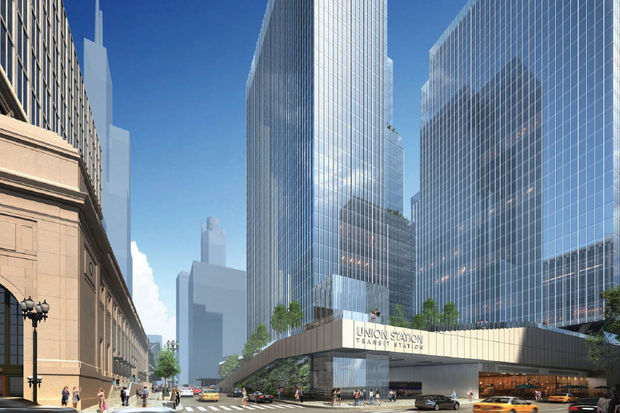 The new office towers as seen from Clinton Street. 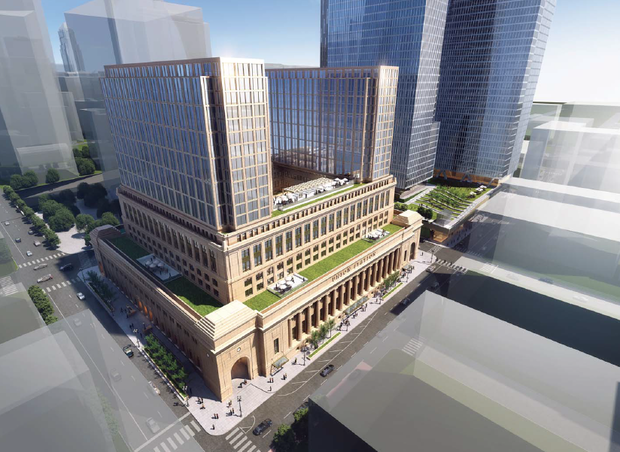 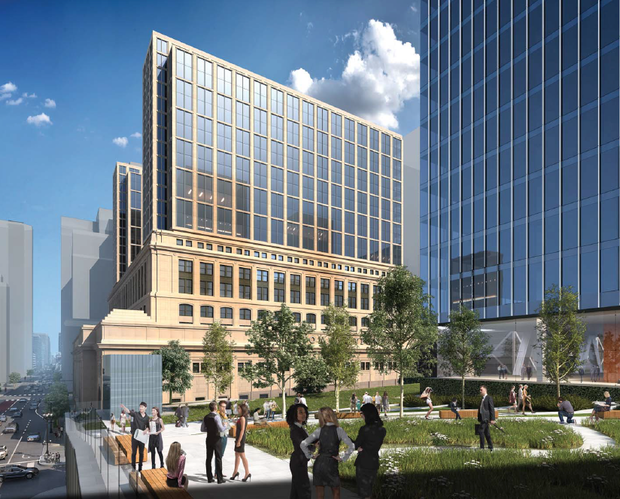 A rooftop garden near the new office towers 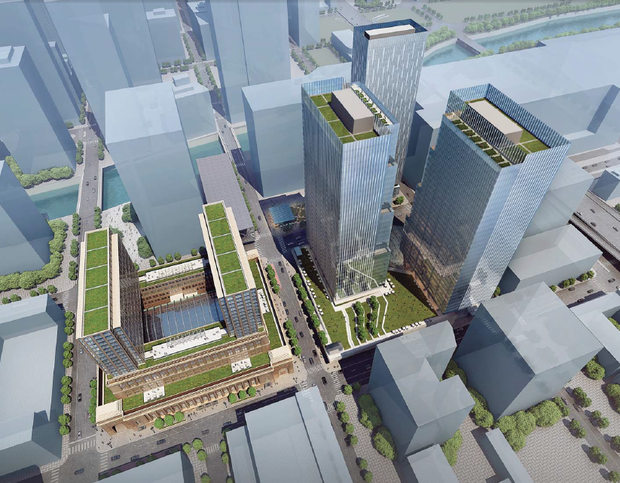 An aerial view of the project 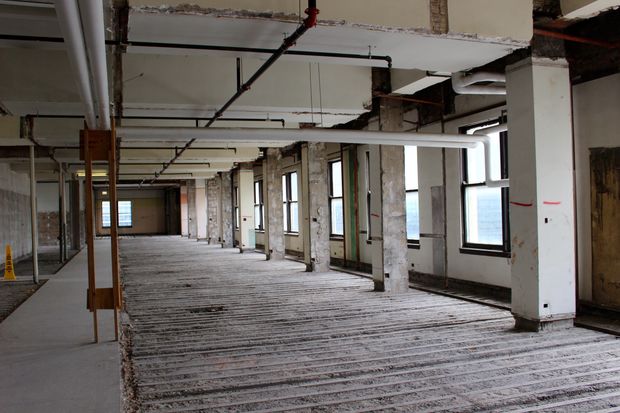 This floor and others near the top of Union Station would be occupied by a new 350-room hotel. [DNAinfo/David Matthews] 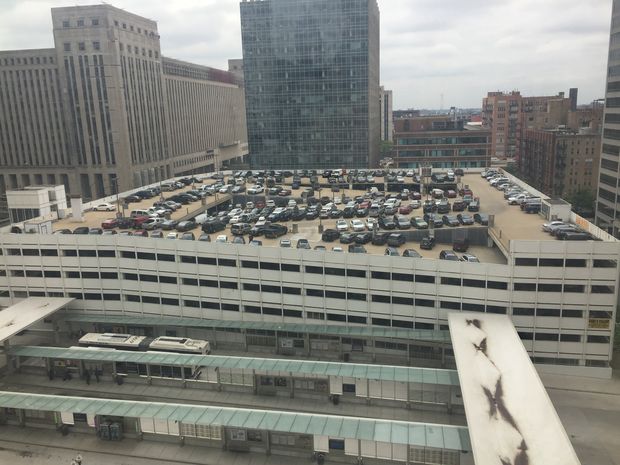 This 1,600 car parking garage would be razed to make way for the new office towers. [DNAinfo/David Matthews] 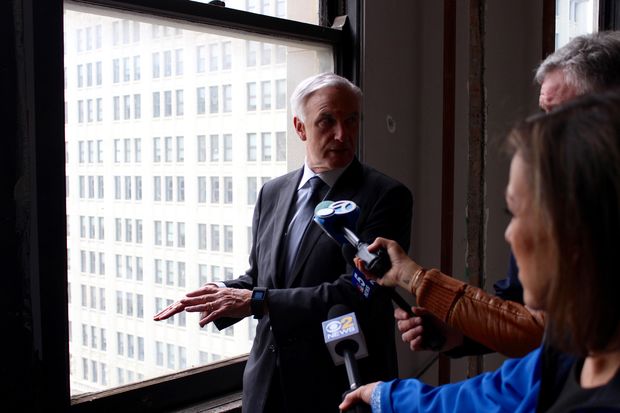