By Howard Ludwig |&nbspMay 18, 2017 6:08am | Updated on May 29, 2017 7:59am
@howardaludwig
Twitter Facebook Email More
Rich Doyle of Morgan Park is the grand marshal of the 2017 Beverly Hills/Morgan Park/Mount Greenwood Memorial Day Parade. Modie Lavin lost her son, Cpl. Conner T. Lowry, in Afghanistan. Both will be at a special ceremony held during the Ridge Run.
View Full Caption
DNAinfo/Howard A. Ludwig

BEVERLY — The Ridge Run and corresponding Memorial Day Parade both take place along the same route and even on the same day in Beverly. But runners haven't always made the connection.

Organizers hope to change that this year with the addition of a ceremony honoring fallen veterans at 9 a.m. Monday — creating a special Memorial Day moment between the 10K and 5K races, said Margot Burke Holland, executive director of the Beverly Area Planning Association.

"That's really when we will have the most runners in the park, and it will give them something to think about while they are on their run," Holland said.

The Ridge Run begins at 8 a.m. with a 10K starting at Ridge Park, followed by a 1-mile youth run at 8:10 a.m. The ceremony featuring the parade's grand marshal Rich Doyle will take place just ahead of the 5K race at 9:30 a.m.

Some 3,000 people are expected at the race. Advance online registration is now open. It costs $45 to run in the 10K, $30 for the 5K and $65 to run both races back to back. It costs $20 to run the youth mile. In-person registration is available for an additional $10 fee.

After the last runner clears Longwood Drive, the Beverly Hills/Morgan Park/Mount Greenwood Memorial Day Parade steps off from 110th Street. The northbound parade typically begins around 10 a.m., but crowds have historically dwindled after the race.

Runners often head home to shower rather than stick around for the parade that has some 65 entries this year. The parade ends with the laying of a ceremonial wreath in a shaded part of Ridge Park featuring several veterans memorials.

Modie Lavin will be on hand for both ceremonies and said the pre-parade festivities will stir interest in the march while also driving home the true meaning of Memorial Day. The Beverly mom's son, Cpl. Conner T. Lowry, died March 1, 2012 while returning from a mission in Afghanistan.

Lavin now works as a family outreach coordinator for the Road Home Program. The mental health clinic is operated through Rush Hospital. Lavin works with returning veterans and their families who suffer from post-traumatic stress disorder, depression, anxiety and other issues.

"We call these the invisible wounds of war," said Lavin, whose program is sponsoring the Beverly parade — the longest running parade in Chicago.

Lavin will ride to Ridge Park behind Doyle, a Morgan Park resident and Vietnam veteran. For years, Doyle recommended local veterans to serve as the parade's grand marshal. This year, he's the one being honored. 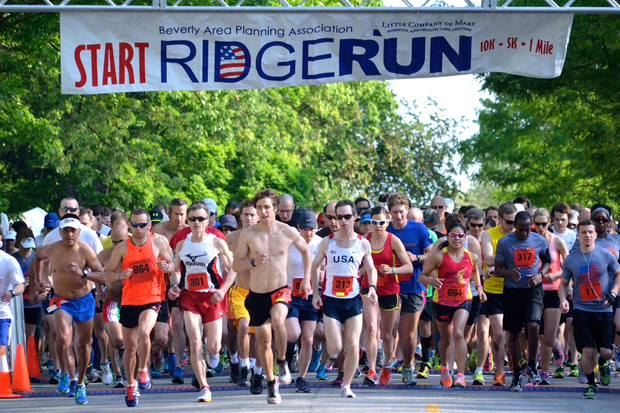 Doyle is a past president of the Beverly-based Windy City Veterans Association and was drafted into the Army in 1966. While in Vietnam, he worked in a special security command, escorting shipments to and from the airport along the South China Sea.

Sometimes those shipments included food and supplies. Other shipments were of fallen soldiers, Doyle said.

A native of St. Sabina Parish in Auburn Gresham, Doyle returned to Chicago Aug. 13, 1968. It was just 13 days ahead of the 1968 Democratic National Convention, and the soldier was quickly hurried out of Midway Airport by family and friends.

"For a lot of years, I hated protesters. I hated the media," he said.

Doyle remains active in the local veteran's group, saying members raised $15,000 recently for the Manteno Veterans' Home. The Windy City Veterans meet on the first Wednesday of the month at the VFW hall in suburban Alsip.

He said the changes to the Ridge Run should remind those in the crowd that Memorial Day isn't about running races, barbecues or mattress sales. Instead, the focus ought to be on those who gave their lives defending our country.

"I am very honored," Doyle said.