By Howard Ludwig |&nbspMay 9, 2017 8:37am | Updated on May 19, 2017 6:07am
@howardaludwig
Twitter Facebook Email More
Beau Dowling celebrated his second birthday May 7 at the Ronald McDonald House near the Ann and Robert H. Lurie Children’s Hospital of Chicago. He returned home the next day after spending six weeks in the Streeterville hospital.
View Full Caption
Supplied Photo

BEVERLY — The Battle for Beau Blood and Bone Marrow Drive will be held from 9 a.m.-3 p.m. Sunday at St. John Fisher Parish in Beverly.

The event his being held in support of Beau Dowling, 2, of Beverly, who was diagnosed with high-risk neuroblastoma — a cancer of the nerve cells — Sept. 29, said his mother, Meg Butler Dowling.

The family returned home May 8 after Beau spent his second birthday at the Ronald McDonald House near the Ann and Robert H. Lurie Children’s Hospital of Chicago. Dowling had been in Streeterville hospital for six weeks for treatment.

"It's a tough one. But he's a trouper. He's amazing," Dowling said.

Beau has had "a zillion" blood transfusions and "a million" platelets, according to Dowling, who added that most of his treatments have been with Dr. Jason Canner at Advocate Hope Children’s Hospital in suburban Oak Lawn.

Besides being born on May 7, Beau is the seventh of Meg and Jim Dowling's seven children. He also weighed exactly seven pounds when he was born. Upon finding the tumor, Beau weighed 22 pounds. The tumor in his abdomen accounted for eight of those pounds, Dowling said.

But Beau's stubborn illness still required two more rounds of chemotherapy as well as two stem cell transplants. And while that round of treatment is over, there's still a long road ahead, including more stem cell treatments, 20 rounds of radiation, antibodies and more. 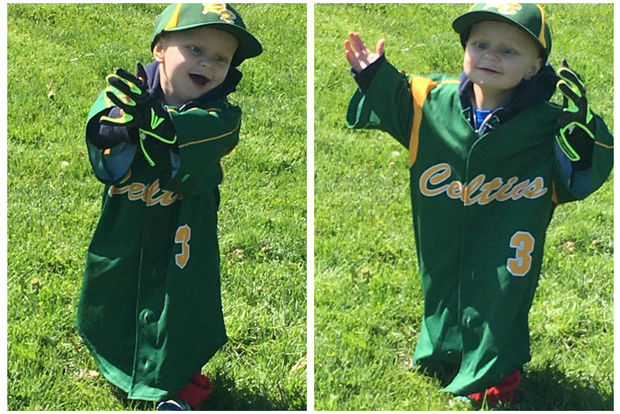 Beau Dowling celebrated his second birthday May 7 at the Ronald McDonald House near the Ann and Robert H. Lurie Children’s Hospital of Chicago. He returned home the next day after spending six weeks in the Streeterville hospital. [Supplied Photo]

There have been many rough days, but Beau approached most of them with a smile. He was often found playing baseball in the hallway of the hospital while attached to machines pushing medicine into the port in his arm, which he offers up willingly to doctors and nurses.

"He is never down," Dowling said.

She said her son's diagnosis has also brought out the best in her neighbors, which she updates via the Facebook page Beau's Battle Buddies. Support has included a bake sale at St. John Fisher on March 19 — Saint Joseph's Day.

The proceeds from this event helped pay for babysitters for Dowling's other children while Beau was in the hospital. She also said there's been a steady stream of visitors at the hospital, as well as people packing lunches for her children and dropping off gift cards at her home.

"I don't think I have made a dinner since [Beau] was diagnosed eight months ago," said Dowling, who returned home to see trees and street poles are decorated with purple and yellow ribbons in support of her son.

Dowling said others have offered to set up a GoFundMe page or host a fundraiser for the family. So far, she has politely declined. But she said the support her family has received already has been overwhelming.

"It's an awful journey we are on, but it really brings out the good in everyone," she said.