MOUNT GREENWOOD — Joseph "Jay" Tarczon didn't shy away from teasing his staff at Joseph's Restaurant And Bar in Mount Greenwood.

Tarczon, who died Saturday at age 44, even nicknamed a waiter who broke 45 plates in one fateful shift "Nate The Plate."

"I literally destroyed half the plates in his restaurant," said Nate Kulleck, a friend of more than 15 years. "But he was the kind of guy if you totally screwed something up, he would just tease you about it. He wouldn't dress you down."

He is survived by his wife of 17 years, Janine, and their two children Brandon, 9, and Emma, 6. He is also mourned by his parents Joe and Kathy (Carroll) Tarczon and his siblings Kristen (Todd) Benjaminson, Michael (Rene) and Brad Tarczon.

"He was such a wonderful guy — always willing to help and participate in anything. He will be greatly missed," said Mary Gill, executive director of the Mount Greenwood Community And Business Association.

Kulleck began working with Tarczon when he was a chef at the restaurant, then known as Richie's. He returned five years ago when Tarczon bought the business and rebranded it as Joseph's.

Tarczon, a native of suburban Oak Lawn, hosted a baby shower for the couple that met at his restaurant. He served 70 people and only charged the employees for drinks.

"He was awesome. It's a huge loss," said Kulleck, who said the fate of the restaurant is unknown in the wake of Tarczon's death.

Despite being a South Sider, Tarczon was a fan of the Chicago Cubs and had a neon "W" sign at the restaurant given to him by a customer. He feared jinxing the team last year and would often call in to be sure the sign was turned off if the Cubs lost, Kulleck said.

Kerry Lynch of Beverly said her family has been regulars at Joseph's since it opened — arriving at 5 p.m. every Tuesday and often on the weekends. In fact, it was Lynch's father, Bob Ryan, who bought the "W" light for Tarczon.

"Our family has known Jay for countless years. We were regulars when he was a chef at Richie's, and then were ecstatic when Jay decided to open Joseph's," Lynch said.

She added that both the food and service were consistently top notch. But it was the owner that made the experience special, often making goofy faces and sneaking maraschino cherries to her three daughters.

Tarzcon loved his family, friends, customers and "all things Cubs. He will be missed tremendously but never, ever forgotten," Lynch said.

Kulleck added that it was also Tarczon's tradition to treat employees and regulars to a shot of Wild Turkey on their birthday. He'd even send a shot with a delivery driver on occasion and required photographic evidence of the often unwanted gift being accepted.

On Saturday night, the somber staff at Joseph's gathered just ahead of closing. In what seemed like an appropriate sendoff, they all did a shot of Wild Turkey.

"It was Jay's dream," Kulleck said of the restaurant.

Tarczon will be buried at Holy Sepulchre Cemetery at 6001 W. 111th St. in Alsip. 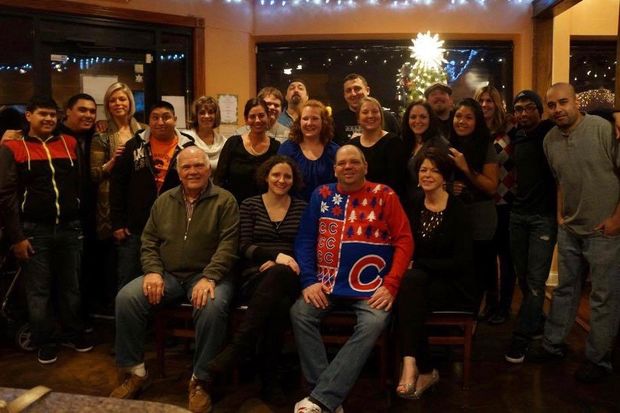 The staff of Joseph's Restaurant and Bar in Mount Greenwood lost their founder, Jay Tarczon, Saturday. Tarczon (wearing the Chicago Cubs sweater) died, leaving behind his wife, Janine, and their two children Brandon, 9, and Emma, 6.