BEVERLY — Tucked within an unassuming storefront along Beverly's busy commercial stretch of Western Avenue is a business that sells an equally unassuming product.

"We are always looking down to see what kind of product people are using," said Jim Russell, who owns the company along with partner Mike Hyland.

Russell launched his business in 2003 from his garage in Beverly. He moved into a nearby storefront at 10141 S. Western Ave. in 2008. From there, the company sells casters to customers within a 180-mile radius.

The business works with 80 different manufacturing companies, placing orders and supplying service for the end users. The company also does some light assembly work and distribution from its storefront.

But most of the orders are shipped directly from the manufacturer. So Access Caster's 13 employees rarely touch the orders that are shipped to customers and are increasingly placed online.

"We were well ahead of the technology curve," said Russell, who said the company's online system takes orders from multiple websites and places them onto one platform.

He actually got his start in 1986. A graduate of Loyola Academy in Wilmette and Loras Collage in Dubuque, Iowa, Russell is the son of a veterinarian. His father's friend recommended him for a job in the industry. 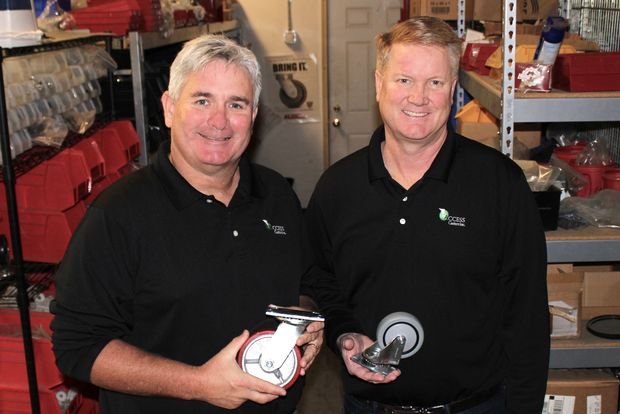 Jim Russell (left) owns Access Caster Inc. in Beverly with Mike Hyland. Russell started the business from his Beverly garage and says it's important to him to stay within the neighborhood. [DNAinfo/Howard A. Ludwig]

He quickly rose to become the top salesman. When that caster business began to experience financial trouble, Russell broke off on his own. Now his company is the same size as its predecessor — posting $4.5 million-$5 million in annual sales.

Russell said the company where he began struggled a bit as casters made overseas entered the market. But lately he said the trend toward the more cheaply made products has receeded.

"We are hearing that more and more. [Customers] want to buy U.S. product," he said.

For his part, Russell admitted that being along Western Avenue in Beverly is not an ideal spot for a business like his. But he said it's important to him to stay close to home, though friends and business associates often ask him why he hasn't moved to the nearby suburbs.

But Russell takes pride in his Chicago address as well as actively recruiting area residents, including graduates from Brother Rice and St. Rita high schools. That includes several of his own children.

"One of the things I really wanted to do was stay in the neighborhood and employ people," he said. "My goal is to have my kids in it."