By David Matthews |&nbspMay 4, 2017 5:38am
@DavidLMatthews
Twitter Facebook Email More
White Castle will tear down this restaurant at Cermak and Wabash later this month and replace it with a new store with a dining room and flat-screen TVs.
View Full Caption
DNAinfo/David Matthews

SOUTH LOOP — White Castle is making good on its plans to tear down its South Loop restaurant and replace it with a nicer one complete with Wi-Fi, a dining room and flat-screen TVs.

Construction will start May 21 at the northwest corner of Cermak Road and Wabash Avenue, said Darrin Cotton, a district supervisor at White Castle. The restaurant at 2140 S. Wabash will serve customers through May 20 before demolition.

Cotton expects the new restaurant will open about three to four months after construction begins.

White Castle secured a building permit for the new restaurant this week after making its plans known two years ago. Cotton said the decision to build a new South Loop White Castle was driven by the new Green Line station next door at Cermak and Wabash, as well as the forthcoming openings of the new DePaul University arena and 1,200-room Marriott Marquis hotel nearby. The South Loop is also one of the few neighborhoods in the city gaining residents.

"The South Loop area, we recognize, is one of the fastest growing population areas in the city of Chicago," Cotton said. "It's just ideal for us to make [the restaurant] bigger and bolder so our cravers can enjoy it."

While the White Castle sits in an area primed for new investment, the corner carries other significance for the fast food chain.

A onetime White Castle built in 1930 across the street at 43 E. Cermak was landmarked by the city in 2011. Then, city officials said the building was the "best-surviving example" here of a White Castle, which popularized hamburgers in America and is considered the "father" of this country's fast-food chains. Chicago was once home to many more White Castles, most of them on the city's South and West sides, and the chain's founder once said he loosely based his restaurants' distinctive designs on the Mag Mile's Old Water Tower. 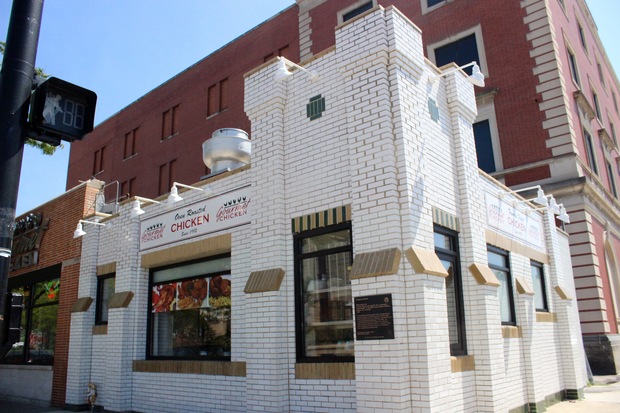 Before White Castle's 1920s founding in Kansas, hamburgers were discarded by most Americans as "carnival food" that resembled meatball sandwiches lumped between cold slices of bread. But the chain popularized the food with its thin patties, onions and warm buns grilled quickly in front of customers in clean-looking, white restaurants. The restaurant at 43 E. Cermak, the 16th in the company's history, was built for $4,500 during the depths of the Great Depression.

Cotton said renderings of the new restaurant weren't available, but the new South Loop White Castle will follow the debut with a new-and-improved Avalon Park restaurant opening in June at 79th Street and Stony Island Avenue.