BUCKTOWN — A planned skate park at the eastern end of The 606 in Bucktown has been scrapped, meaning a green space one neighbor described as "fabulous'' will remain beneath the elevated Bloomingdale Trail.

Ken Modzelewski, acting region director of the Trust for Public Land, which manages the 606, said that the skate park was no longer slated for the trail.

"The community has expressed great appreciation in Walsh Park’s current state as an open green space.  Plans for the skate park have been suspended," Modzelewski said in a statement issued Wednesday.

The statement from the trust, which works with the Chicago Park District in overseeing the trail through Bucktown, Wicker Park, Logan Square and Humboldt Park, also said that "community partners are working together to re-evaluate the community interest of specific features and amenities along the 606."

Last month, at a police and community meeting for residents who live near the trail, Vivian Garcia, the  Park District's manager of the 606, said community feedback about green space at Walsh Park was "very positive," and it was decided to keep that instead of building the skate park.

First introduced in 2013 when the 606 was in its planning phase, the idea for what was pitched as a "wheel -friendly event plaza" came as a surprise to Bucktown residents who live on Bloomingdale Avenue along the elevated path.

"People were concerned that there was no community process that led to the wheel [skate] park," 32nd Ward Ald. Scott Waguespack said earlier this week.

Judie Knoerle and her husband John Knoerle collected more than 200 signatures and created a petition against the skate park, which she called "a cement thing, like a carved-out bowl."

"I never threw out my petitions, just in case it raised its head again," Knoerle said. "We are thrilled. I think anyone you would speak to right on Bloomingdale Avenue are thrilled, too."

The Knoerles were concerned about the sidewalk in front of their home becoming a highway of sorts for skaters going to and from the skate park, envisioned at the base of the trail.

"Skateboarders bring in a different element to 606 than bicyclists, walkers and joggers. They are not kept from skateboarding on the trail. We live right on Bloomingdale [Avenue], and we dreaded having skate boarders running down the street toward the skate park.

Knoerle described the grassy field as "lovely" and said it is a draw for kids and families.

Building of the skate park had stalled after a 2015 state funding freeze, which also froze projects at several parks and other elements of the 606's expansion, including a ground-level park at the site of a former glove factory on the west end of the trail in Humboldt Park.

Ananda Breslof, president of the Walsh Advisory Council, a volunteer group that helps to organize events at the park at 1722 N. Ashland Ave said that the community is opposed to the skate park.

"The second I found out there was not enough funding [for the skate park], I asked for green space," Breslof said.

Breslof described the existing grassy knoll at the northwest side of Walsh Park where the skate park was planned — and which was sodded over last year — as "fabulous."

As for living along the trail itself, Knoerle said "It's been surprisingly positive."

"My husband was initially Mr. Curmudgeon and thought we'd get a lot of lookie-loos. For the most part, it's been fine. " 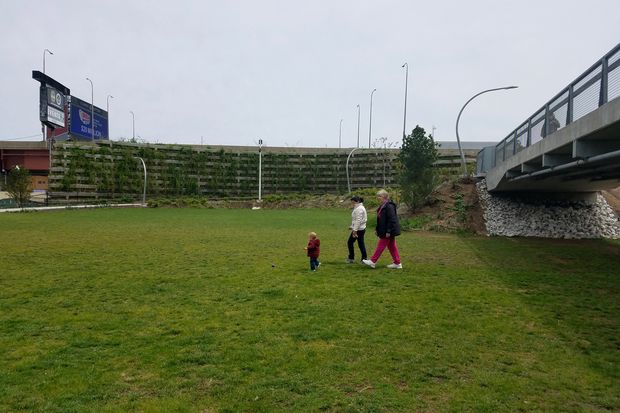