MOUNT GREENWOOD — The Beverly Hills/Morgan Park Home Tour will once again feature sprawling and historic homes, but a tiny house will be on display this year too.

Since then, the school at 3857 W. 111th St. has used the tiny house at a handful of events, including at a car show on campus and as part of a cooking demonstration for elementary school students.

Selling the tiny house then became part of a lesson plan set up by Noelle Coronado, an agriculture finance teacher. Her students developed brochures and held an open house Oct. 22 for the miniature home on wheels. 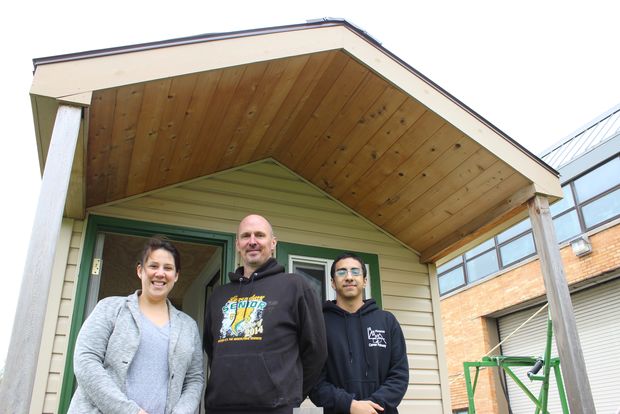 From left, Noelle Coronado, Jim Slee and Joel Arizaga of the Chicago High School for Agricultural Sciences stand outside a tiny house that was built at the Mount Greenwood school. [DNAinfo/Howard A. Ludwig]

A deal 1½ months in the making ended up falling through, and students hope a new buyer emerges at the home show. They have set the price of the house — which needs a bit of work — at $10,000 and are willing to negotiate.

For the home tour, the tiny house will be parked at Ridge Park, 9625 S. Longwood Drive in Beverly. The park's field house was built in 1913 and will serve as the starting point for the tour. The park will also be open for tours, including its renowned John H. Vanderpoel Memorial Art Gallery.

In addition, five homes will be on the self-guided tour that runs from noon-5 p.m Sunday. Advance tickets are available online and cost $30. Tickets can also be bought on the day of the tour for $35.

Margot Burke Holland is the executive director of the Beverly Area Planning Association, which hosts the annual showcase of homes. She's expecting upward of 800 people for the tour as a pair of homes designed by famed architect Frank Lloyd Wright are expected to draw a crowd.

"This is a really special year," Holland said. 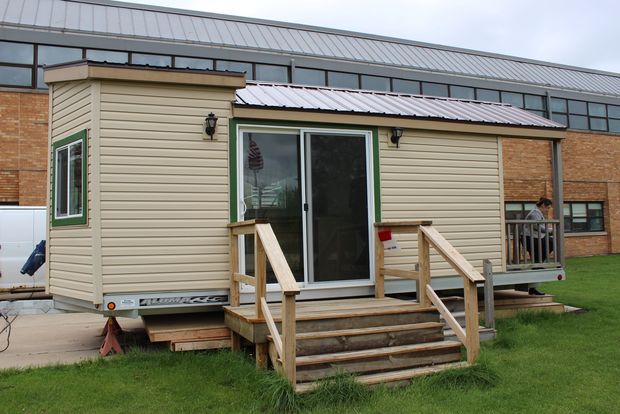 The tiny house built by students at the Chicago High School for Agricultural Sciences is 144-square-feet and can be towed up to 45 miles per hour. [DNAinfo/Howard A. Ludwig]

Getting a rare glimpse of these Prairie-style homes in Beverly also coincides with the 150th anniversary of Wright's birth, so Holland is expecting enthusiasts from throughout the Midwest to converge in Beverly for the tour.

That bodes well for the tiny house, said Jim Slee, an agriculture mechanics teacher who led the team of 18 seniors who built the 8-foot-by-24-foot structure.

He admitted that the house was completed in a rush ahead of the garden show, but it was also a huge hit as the project capitalized on the popularity of several new television shows including HGTV's "Tiny House Hunters" and "Tiny House Nation."

But in the rush, some things remained unfinished. For example, the tiny house doesn't have a toilet, nor does it have holding tanks for fresh water or waste water. There also aren't batteries to supply electricity.

"We were pressed for time," said Slee, adding that much of the tiny house was built on the floor of the garden show at Navy Pier.

Slee also said these items were left out — in part — because the new owner might want to park the tiny house at a campground. In that scenario, fresh water and electricity would likely be provided as well as an outlet for waste water, he said. 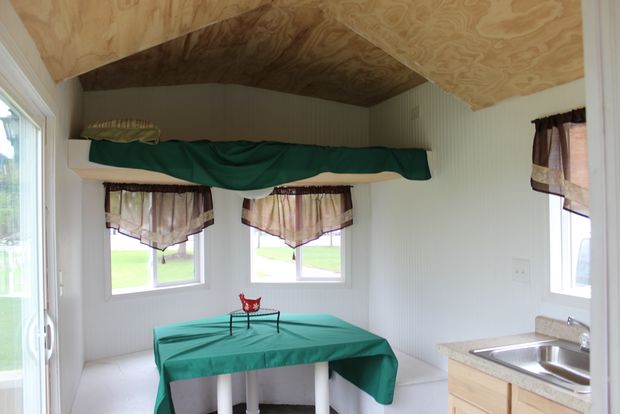 A loft bed sits above the kitchen table in the tiny house built by students at the Chicago High School for Agricultural Sciences. The table also folds flat to become a sleeping surface. [DNAinfo/Howard A. Ludwig]

"We were trying to make it as much like an RV as possible," Slee said.

He also said that students from the school would be willing to further customize the house to a buyer's specifications for a fee. But most of the structure is already in place, including a loft bed and a kitchen table that converts to a sleeping area.

The tiny house can sleep five people, according to the sellers. There's no oven, as the builders believed most meals would be cooked on an outdoor grill. The buyer would also have to provide a refrigerator and space heater.

"The whole idea of a tiny house is to spend most of your time outside," Slee said.

Holland said the tiny house is sure to be a popular attraction on the home tour. She also appreciated the juxtaposition of the small house against some of the larger homes that will be on display.

"I think it's always nice to showcase all kinds of homes. I don't think it needs all kinds of square footage to be a unique home," Holland said.