By David Matthews |&nbspMay 1, 2017 6:21am | Updated on May 1, 2017 8:27am
@DavidLMatthews
Twitter Facebook Email More
Macy's will keep its famed Walnut Room on State Street despite listing the top seven floors of its Loop flagship store for sale.
View Full Caption
Macy's

THE LOOP — Macy's will keep its famed Walnut Room despite the future redevelopment of the former Marshall Field's store on State Street.

Macy's will officially list the eighth through 14th floors of the historic department store at 111 N. State St. for sale to developers, Macy's spokeswoman Andrea Schwartz said in an email.

Such a sale wouldn't affect the Walnut Room restaurant, which has been a fixture on the seventh floor of the Macy's, neé Marshall Field's, store since 1907.

Macy's is closing stores throughout the country, and the chain told investors earlier this year that downsizing its flagship store in the Loop was a "top priority" for 2017. Schwartz told DNAinfo in February that it would "keep the tradition of the Walnut Room" through any redevelopment.

"As we have reported, Macy’s is continuing to execute on our real estate strategy that is focused on creating value through monetization and, in some cases, redevelopment of our assets," Schwartz said. 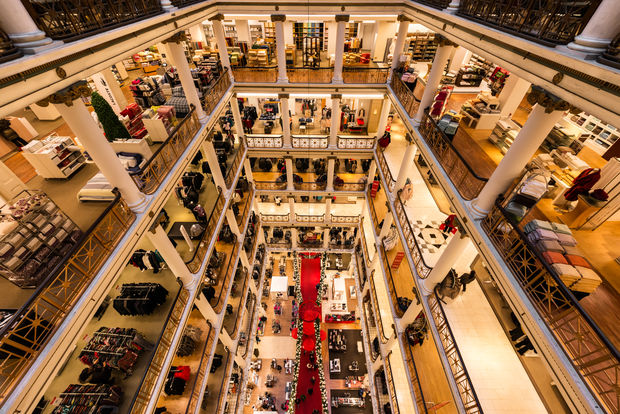 The view from the atrium at Macy's on State Street [Shutterstock]

The Walnut Room — the first restaurant to open in a department store — is one of the few remnants of the former Marshall Field's, a pioneering store that also was the first to employ female sales clerks, supply bridal registries and offer money-back guarantees. The restaurant first opened as a tea room before renaming itself for its walnut wood-paneled walls in the 1930s.

The Walnut Room still serves a chicken pot pie named after Mrs. Hering, an enterprising clerk who inspired the century-old restaurant after selling pies to customers as they shopped. The store puts up a 45-foot tree in the Walnut Room every winter for the holidays.

Macy's bought Field's in 2005, when the New York chain went on a department store-buying spree. Macy's is now closing dozens of stores — and selling off portions of others — amid weak sales.

Marshall Field's Lives On At Macy's, 10 Years After The Big Name Change