Before You Dig In The Yard, Call 811, Peoples Gas Tells Ag School Students

By Howard Ludwig |&nbspApril 28, 2017 1:51pm | Updated on May 1, 2017 8:21am
@howardaludwig
Twitter Facebook Email More
Students at the Chicago High School for Agricultural Sciences plant a tree outside of the school at 3857 W. 111th St. in Mount Greenwood for Arbor Day 2017.
View Full Caption
DNAinfo/Howard A. Ludwig

MOUNT GREENWOOD — Essence Roberson, a freshman at the Chicago High School for Agricultural Sciences, was given a tutorial Friday about how to find underground utility lines from Juan Ayala of Peoples Gas.

The gas company provided similar tutorials to some 300 students at the school at 3857 W. 111th St. in Mount Greenwood as part of an event celebrating both Arbor Day and National Safe Digging Month.

"I actually want to be an engineer, so it was really cool working with [a device to locate underground lines] hands on," said Essence, of Morgan Park.

Peoples Gas provided the school with a buckeye tree to celebrate the day dedicated to planting trees, which falls on the last Friday in April in Illinois. The tree was planted by students near the main entrance of the school. 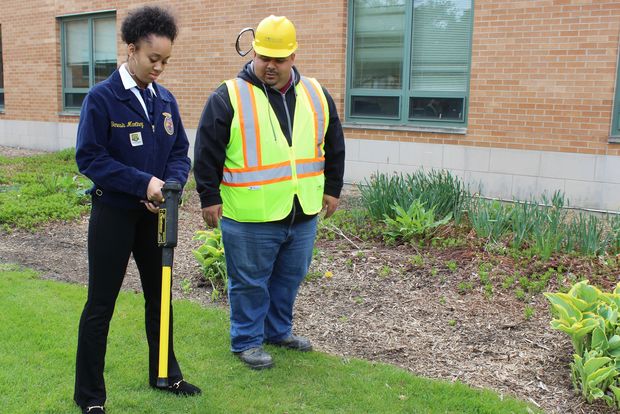 A student at the Chicago High School for Agricultural Sciences receives a tutorial from Juan Ayala of Peoples Gas on how to locate underground utility lines. [DNAinfo/Howard A. Ludwig]

To promote safe digging, Ayala was on hand to demonstrate the locator device, giving student an opportunity to find an underground electrical wire used to power the lights facing the school. Identifying such buried cables and other supply lines is an important step for anyone planning to dig, said Dan Germeraad, a system integrity manager for Peoples Gas.

"The message that we are sending today is that it is important to call 811. It's a safety issue," Germeraad said.

Indeed, striking a gas, electrical or other line can have serious consequences, and calling ahead of digging can prevent accidents, said Germeraad, who advised homeowners to call for markings even when digging shallow holes for flowers and bushes.

"It's a free call. There is really no burden on the homeowner," he said, adding that lines are marked within 48 hours of placing the call.

Nationwide, an underground utility line is damaged every six minutes because someone decided to dig without having the lines marked, Germeraad said. He said damaging gas lines has become somewhat easier since the company moved from steel to plastic supply lines.

"In the past when we had a steel line, a shovel couldn't do much damage," he said.

Peoples Gas is working throughout the 19th Ward to update its system of underground supply lines as well as moving gas meters outside of homes. Such work will continue in West Beverly through the late summer, said Vanessa Hall, a spokeswoman for the gas company.

Hall said the gas company will be performing similar upgrades in Morgan Park — west of Interstate 57 — through the fall. 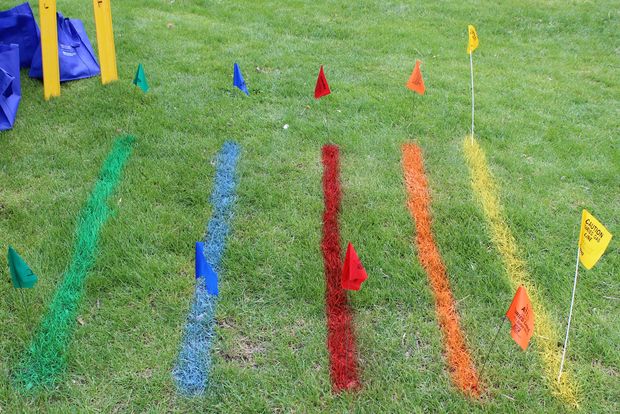 Peoples Gas outlined the various markings for underground utilities Friday at the Chicago High School for Agricultural Sciences in Mount Greenwood. From left, the green mark is for sewer lines; the blue is for water; the red line is for ComEd; the orange line is for AT&T; and the yellow line is for natural gas. [DNAinfo/Howard A. Ludwig]

"Construction in these two neighborhoods will run through the remainder of the year. All of these projects are part of our system modernization program," she said.

JaMonica Marion, a teacher at the Ag School, said it was mostly horticulture and biotechnology students who were on hand for Friday's demonstration. She said it's a valuable lesson for students to see that Peoples Gas and other utilities have a need for the skills they are learning in the classroom. And the lessons in safety are equally important.

"With us being an agriculture school, it is very important for our kids to know — even if they are planting their own garden — that they call 811," Marion said.