BEVERLY — A staircase meant for exercise, a tree house-inspired playground and improvements to the Major Taylor Bike Trail are all coming to the Dan Ryan Woods in Beverly.

The additions and more were the focus of a meeting held Wednesday night by the Forest Preserves of Cook County at Wild Blossom Meadery, 9030 S. Hermitage Ave. in Washington Heights.

The meadery, a wine-making and tasting facility, sits just outside of the 257-acre nature preserve and borders the bike trail that begins at the northern end of the Dan Ryan Woods. The trail runs through the woods for about 1½ miles to 91st Street.

"We have been doing a lot of work on improvements in the Dan Ryan Woods," said Kindy Kruller, a senior planner with the forest preserves.

Projects that will get underway in the fall and could be completed by the end of the year include a nature play area and a large staircase. With an estimated cost of $600,000, the play area will be made to look and feel like a tree house.

Natural materials will be used throughout. The design could include features such as a hollow log for children to crawl through, various stumps for climbing and a rope-and-pulley system, said Chris Slattery, the director of planning and development for the forest preserves.

The other project already in the pipeline was inspired by Swallow Cliff Woods, a forest preserve near suburban Palos Park. This park was built in 1930 and featured a toboggan slide until the slide was closed in 2004.

But the stairs to the top of the slide remained popular with exercise enthusiasts. The new stairs in the Dan Ryan Woods hope to draw a similar crowd, even though the hill is not quite as high and the incline isn't as steep in Beverly, Slattery said. 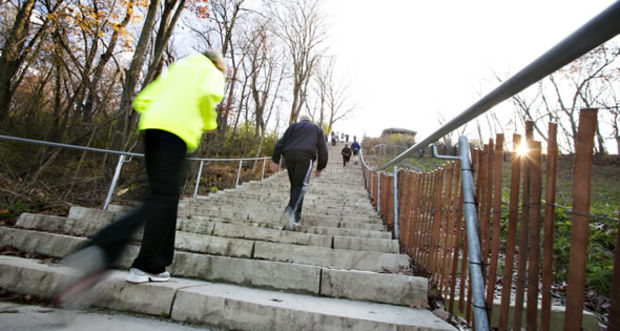 With a roughly $400,000 price tag, the stairs will also help snowboarders and those sledding get to the top of the hill in the winter months, Slattery said, adding that there's already an established walking group that uses the one-mile path built in 2011 in the Dan Ryan Woods for daily exercise. 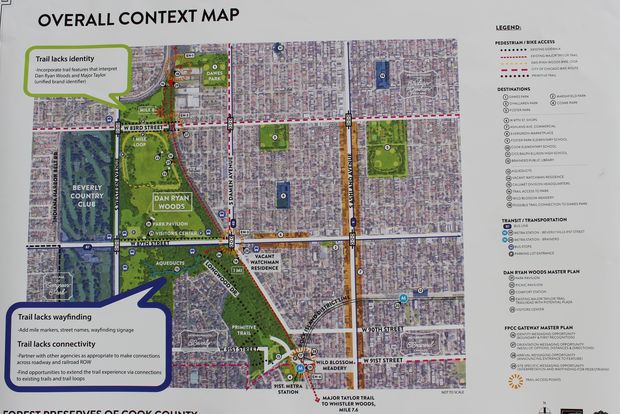 This map of the Dan Ryan Woods shows the path of the Major Taylor Trail and other amenities in the 257-acre nature preserve in Beverly. [Supplied Illustration]

The bulk of the meeting focused on improvements to the bike trail named for Marshall Walter "Major" Taylor, an African-American cyclist who was once the fastest rider in the world and set seven world records in 1899.

Her group is also looking to use the trail — originally built to accommodate a railroad — to tell the story of Taylor through signs and artwork along the path.

Taylor "did some extraordinary things to hold a bunch of world records while in the meantime being treated horribly," Mariano said.

Several people in the audience voiced concerns about the trail's crossing at 87th Street, saying traffic often fails to yield to cyclists and pedestrians. Others said riders struggle to figure out what the route is south of 91st Street. 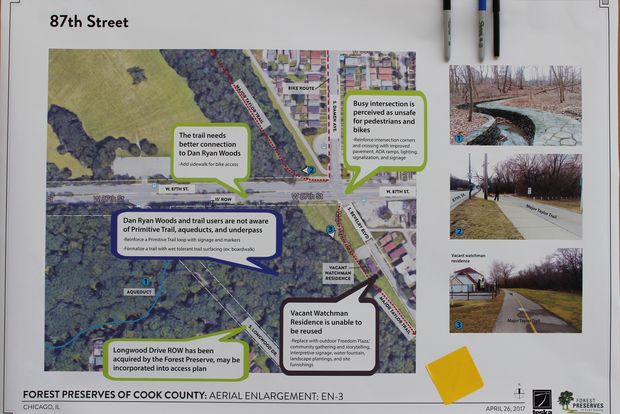 The intersection of the Major Taylor Trail and 87th Street was a point of discussion Wednesday night as officials with the Forest Preserves of Cook County spoke with nearby residents about improvements at the Dan Ryan Woods in Beverly. [Supplied Illustration]

Indeed, the trail continues southeast for another 6 miles and is routed on city streets from 95th to 105th streets. It eventually connects to Whistler Woods near the Little Calumet River.

The Dan Ryan Woods wll also celebrate its 100th anniversary Aug. 27 and an event to recognize the milestone is also in the works, said Arnold Randall, general superintendent of the forest preserves.

He added that the Dan Ryan Woods is the most heavily used park in the entire forest preserve system for picnic permits, drawing church groups, family reunions and other parties.

"People have been coming here for years," he said.