Retired Fireman Saved By Firefighters He Meets Every Morning For Coffee

By Howard Ludwig |&nbspApril 25, 2017 5:54am | Updated on April 25, 2017 6:18am
@howardaludwig
Twitter Facebook Email More
Retired Chicago Fire Department Lt. Robert Zolna (center) of Beverly was revived after going into cardiac arrest Feb. 9 by the many of the same firefighters and ambulance personnel he meets for every day for coffee at the firehouse in Mount Greenwood.
View Full Caption
DNAinfo/Howard A. Ludwig

But at 6:49 p.m. Feb. 9, those same firefighters and emergency personnel were dispatched to Zolna's home in West Beverly. They found him suffering from low blood sugar, which sent him into cardiac arrest.

The medics shocked Zolna's heart six times in 10 minutes and were able to revive him. He's since returned to the firehouse at 3112 W. 111th St. — seated in the same chair surrounded by the men and women who saved his life.

"You guys did a helluva a job," Zolna, 75, said Saturday morning. "I have nothing but thanks for the guys that are sitting in here."

"People ask me, 'Why do you go to the firehouse?' Because it is my routine. I know the guys here. I know the chiefs," he said.

On the day of his heart attack, Zolna missed his morning coffee because of a doctor's appointment. A diabetic for 40 years, he returned home, went down into his basement and fell asleep in a chair. 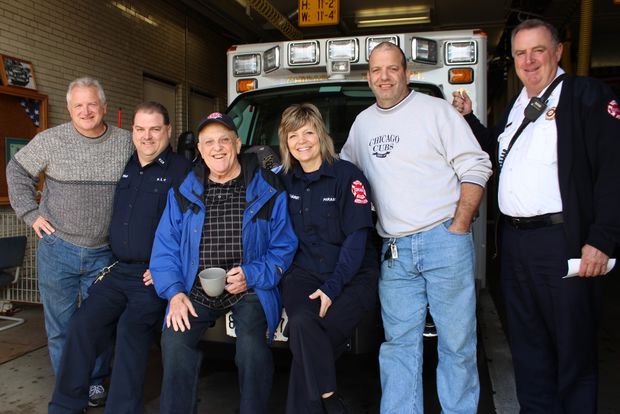 Retired Chicago Fire Department Lt. Robert Zolna (center) of Beverly was revived after going into cardiac arrest Feb. 9 by the many of the same firefighters and ambulance personnel he meets for every day for coffee at the firehouse in Mount Greenwood. [DNAinfo/Howard A. Ludwig]

He skipped lunch that day and when his wife, Luce, came home she noticed "the dog that hates him running around the kitchen barking at the top of the stairs."

She went down the 13 steps into the basement and found her husband making strange noises. He was cold to the touch and soon began thrashing around. She called her neighbor, Katherine "Kitty" Giblin, an ambulance commander with the fire department.

Both assumed that Zolna's blood sugar was off. That's when Luce Zolna called another nearby paramedic, Victoria Janozik. She called the firehouse directly. Giblin called 911.

"We knew it was Bob's house," said Joan Marquardt, who responded to the call with fellow paramedic Ron Taylor. All four medics on the scene started to administer care by attempting to raise Zolna's blood sugar with an injection of dextrose.

But before but before they could even finish the treatment, Zolna had a seizure and went into cardiac arrest. He quit breathing and his color changed. That's when Taylor inserted a breathing tube.

"Having four medics there was great, because everybody had their job," Taylor said.

A team of five firefighters had arrived too. Diego Banuelos and Greg Battistella took turns performing chest compressions. Meanwhile, a defibrillator machine was used to shock Zolna's heart back into rhythm.

Despite being concerned for their friend, Battistella couldn't help but smile. First, Zolna had on more than one occasion told them that he never uses his basement. Second, Luce Zolna kept screaming that Bob couldn't die because she, "just wrote the check for the Bahamas."

As it turned out, Bob and Luce will take their trip to Bahamas on Oct. 23. The firefighters and paramedics were able to stabilize him enough to take him to Little Company of Mary Hospital in nearby Evergreen Park.

His heart stopped again in the emergency room, where doctors warned Luce and the paramedics not to get their hopes up. But Zolna pulled through. He was later transferred to the University of Chicago Hospital. There, doctors installed a combination pacemaker and defibrillator device.

On March 21, Zolna was back at the firehouse for coffee. Luce even drove him there as his doctors had not yet cleared him to drive. Taylor snapped a picture of the retired fireman back in his element.

"They keep feeding me cakes and cookies now to keep my blood sugar up," Zolna said.

A ceremony honoring the firefighters and paramedics that saved Zolna's life is set for May 24 at the Robert J. Quinn Fire Academy in the South Loop. Zolna expects to be there, adding that he "feels great" after his near-death experience.

Luce Zolna said she'll be there too.

"What I remember most is how these guys worked as a team," she said. "And when they were working on him, all I could see was all of his friends. I don't think they could have tried any harder."