DOWNTOWN — Chicago's about to get hit with another sign of spring: the return of Crown Fountain in Millennium Park.

The 50-foot-high video screens known for their spitting images of Chicagoans will be turned back on Saturday, city officials said. And they're going to be good as new.

The fountain at Michigan and Monroe will return after months of extensive renovations, including a complete replacement of its video screens and some street-level paving work nearby.

The fountain, named after the family of Chicago industrialist Henry Crown, opened in 2004 with 30-inch thick LED screens, said Tom Jacobs of Chicago-based Krueck+Sexton Architects, which was involved with the project.

The screens debuting Saturday are about 2½ inches thick, brighter than the old ones and more efficient, Jacobs said.

"It’s like a laptop or a cellphone; we knew this technology wasn’t going to be supported forever," Jacobs said.

The city is expected to announce the fountain's return Saturday.

The fountain was created by Spanish artist Jaume Plensa, who with help from the School of the Art Institute recorded video of 1,000 ordinary Chicagoans for the project.

As part of the fountain's cycle, the faces occasionally pucker and appear to spit a stream of water at people playing in the fountain. Delighted kids pack in beneath the fountains to get hit by the water.

Back then "it was hard to get a handle on whether this was the most brilliant thing ever done or a bit tacky, especially where the spouting was concerned," Jacobs said. "When it came online it was just absolutely amazing how magical it was."

A spokesman for Plensa said the Catalan artist was not available for an interview, but prior stories about the fountain show his vision.

"The city has an amazing fountain, the Buckingham Fountain, but that was not my concept," Plensa told the Sun-Times in 2004. "My question was: What could a fountain be today?” 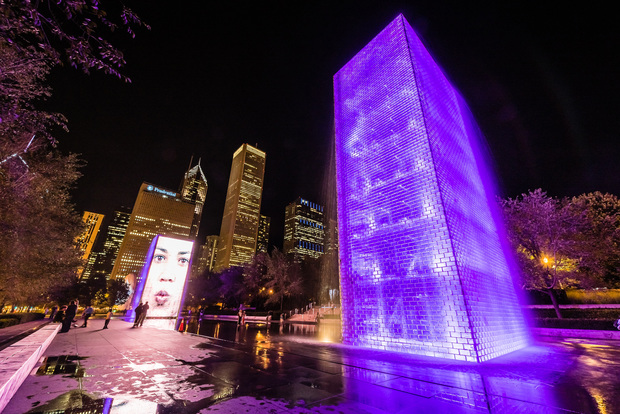