Portage Park Starbucks Proposal To Be Discussed At Wednesday Meeting

By Alex Nitkin |&nbspApril 18, 2017 6:03am
@alexnitkin
Twitter Facebook Email More
A strip mall including a drive-thru Starbucks would replace a long vacant lot at the corner of Irving Park Road and Central Avenue, according to a proposal supported by Ald. Nicholas Sposato (38th.)
View Full Caption
Google Street View

CHICAGO — Anyone with an opinion on the controversial proposal to build a Starbucks drive-thru at the intersection of Irving Park Road and Central Avenue can speak up at a neighborhood meeting called to discuss the plan, set for 7:30 p.m. Wednesday at Filament Theatre, 4041 N. Milwaukee Ave.

Under the plan, whose fate is set be decided by the city's Zoning Board of Appeals on Friday, developer Sumac would build the coffee shop alongside a new 7,245 square-foot commercial building on a concrete lot that's sat vacant for more than a decade.

The Portage Park Neighborhood Association announced its opposition to the plan next week, citing safety concerns with a design that would see cars making left turns across two major traffic thoroughfares.

Leaders of the association said the developer had originally agreed to update the design with so-called "pork chop entrances," which would curve to ensure that cars could only enter the lot by making right-hand turns. But their final design was drawn with more traditional entrances, which the association called "unacceptable" in a letter it released Sunday. 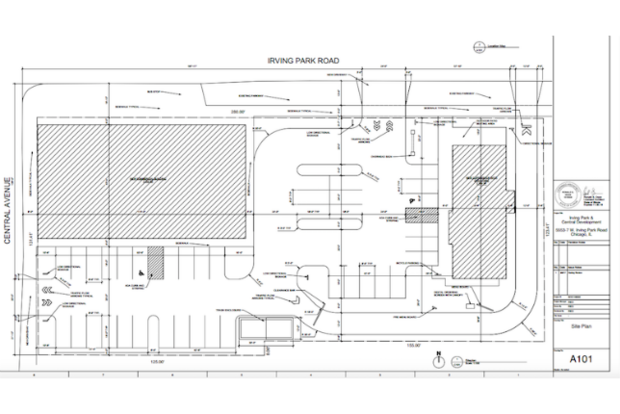 The year-old West Portage Park Neighbors Association, meanwhile, is taking a similar approach to corral support for the proposal. It's inviting neighbors to add their names to its own statement, which says the drive-thru coffee shop would "provide a much-needed boost to the economic life" of the area.

As for traffic concerns around the project, leaders of the West Portage Park Neighbors Association touted a letter from the developer promising to erect "no left turn" signs at "all access points" of the site.

"The option to turn left was problematic at best and hazardous at worst," according to a Friday post on the group's Facebook page. "That had to be corrected before the project, in our opinion, could move forward ... Hopefully, this puts this issue finally to rest."