The History, Heroes And Hauntings Of Chicago's Famed Rosehill Cemetery

WEST RIDGE — Before becoming one of the city's most prolific resting places, Rosehill Cemetery was a rolling plat of hilly land called "Roe's Hill" by locals.

In true Chicago form, nearby resident Hiram Roe would not sell the property without a promise it would be named after him when the city sought to buy it.

A city clerk mistakenly jotted down Rosehill, which stuck as the graveyard's name.

It was incorporated as a cemetery in 1859, and in 1864 its famous entrance archway was added by designer William Boyington, who would go on to create many other well-known Chicago landmarks, including the Water Tower pumping station on Michigan Avenue.

The cemetery is open to the public and even offers periodic guided walking tours for free across its massive property, including inside the elaborate mausoleum, added in 1914.

Each year around Halloween, a candlelit 5K run/walk is held at the site, giving participants a chance to jog among soldiers and generals from the Civil War and American Revolution eras, a firefighters memorial, 13 Chicago mayors, business tycoons and other notable city figures.

Victims of famous Chicago crimes such as the St. Valentine's Day Massacre and notorious murderers Nathan Leopold and Richard Loeb are buried there as well.

In 1975, Rosehill was added to the National Register of Historic Places.

Use the map below as a guide to some of the cemetery's most well-known inhabitants. Scroll down for more information on each site.

Rosehill's history has also brought to life stories of apparitions, misty memorials, unsettling sounds and ghostly figures — garnering the attention of ghost hunters and those curious about local folklore. 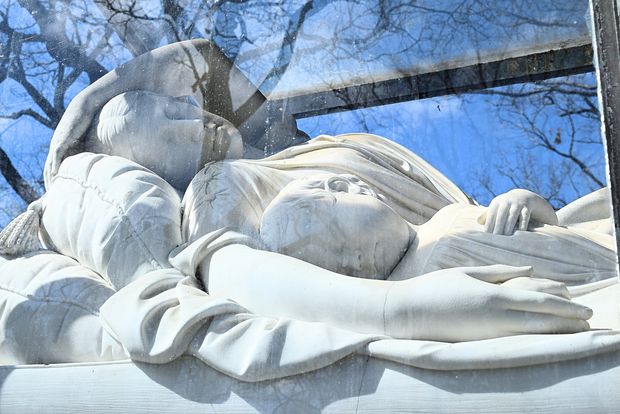 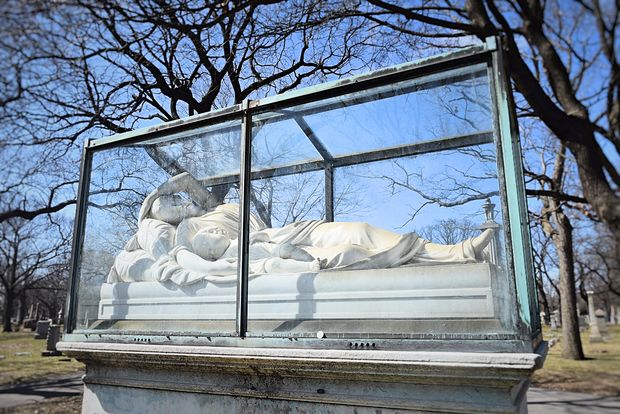 One of the cemetery's most popular stories and grave sites is that of the sculpture of Frances Pearce and her infant daughter, Frances Pearce Stone, entombed within a glass box.

The young mother married at age 17 and was pregnant shortly thereafter. At age 20, she died.

Grief-stricken, her husband had a sculpture of the two of them made and had it sent to the former Chicago Cemetery in Lincoln Park, before those memorials were moved to other graveyards, such as Rosehill.

When the statue, which now attracts well-wishers who leave small amounts of cash and coins at the sculpture's base, was moved to Rosehill, the glass top was added to preserve the mother and child.

As legend has it, the box fills with a mysterious mist on the anniversary of the mother's death — though some have debunked that as a normal occurrence as weather and outside temperatures change throughout the year. 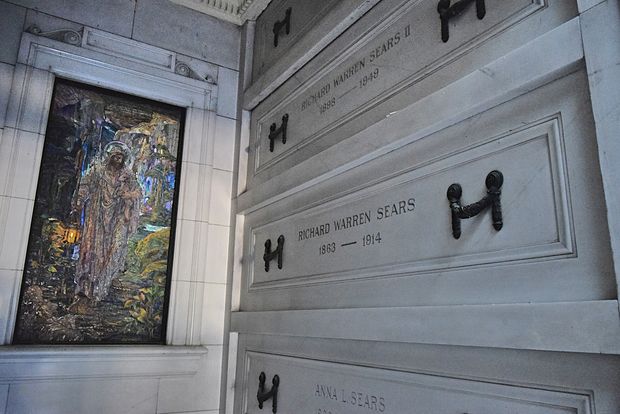 Sears founder Richard Sears, who died in 1914, is also said to haunt Rosehill, in particular the mausoleum.

Sears was interred in a private family room at the end of a small hallway on the building's second floor.

Though seemingly a peaceful resting place, Sears is said to be disgruntled because of his room's proximity to that of one of his most bitter rivals: Aaron Montgomery Ward, who also operated a successful mail order business in Chicago at the same time as Sears.

"Some have claimed to have seen the figure of a tall man in a top hat within Sears' locked room, walking toward the crypt of A. Montgomery Ward," writes Graveyard.com. "These two titans of the mail-order business are entombed only a short distance apart — bitter rivals in life, neighbors in death."

Others have claimed to hear the rattling of chains, footsteps or sights of glowing figures throughout the grounds.

However, not all of the cemetery's residents appear unnerved. 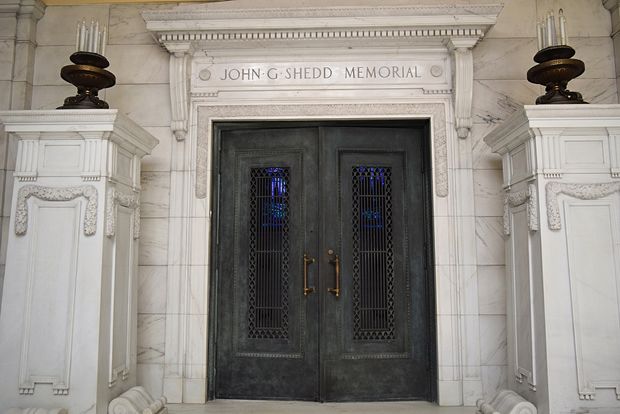 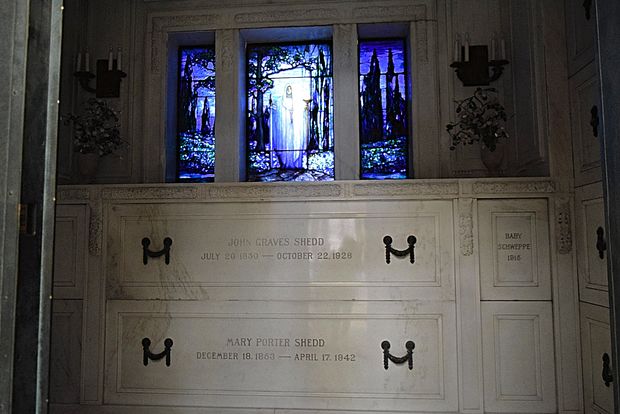 Also on the second floor of the mausoleum, John G. Shedd, former president of Marshall Fields and Co., is interred in one of the building's most beautiful and elaborate family crypts.

Huge marble pillars and full-size doors lead into the small room where Shedd, his wife, and other family members remain together.

A custom stained-glass window acquired by Shedd for his tomb bathes the room in blue once the doors are closed, evoking a feeling of being underwater.

Outside Shedd's room is a large sanctuary containing reflecting benches embellished with designs of seashells and sea horses (the city's aquarium is named for him), as well as doors leading into other private rooms. 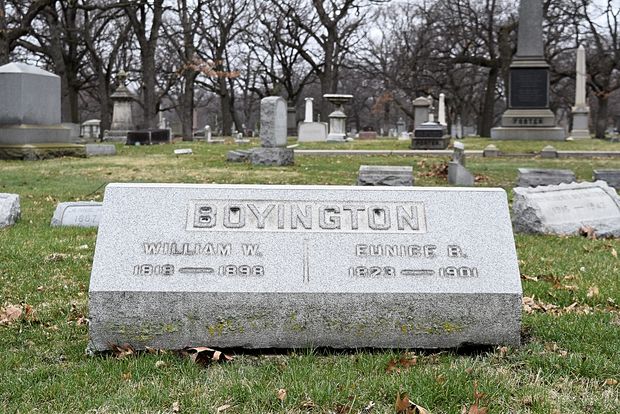 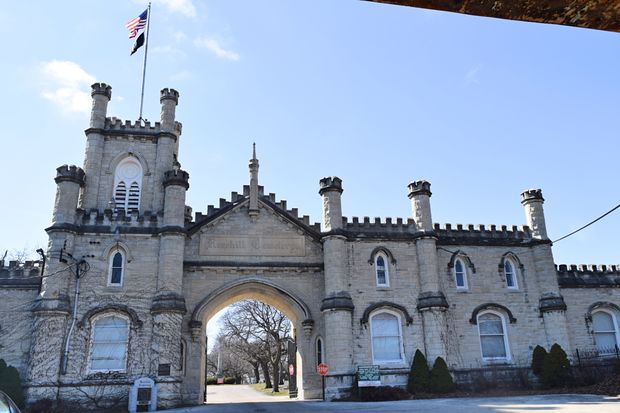 The entrance at Rosehill and Ravenwood, designed by Boyington. [DNAinfo/Linze Rice]

Though William Boyington served as mayor of Highland Park during his career, he is most known for his notable designs of famous Chicago structures, such as Rosehill's entrance on Ravenswood Avenue, the Chicago Water Tower and pumping station and the Joliet Prison. Many of his works, such as the University of Chicago's first building, have been demolished over the years or were destroyed in the Great Chicago Fire. 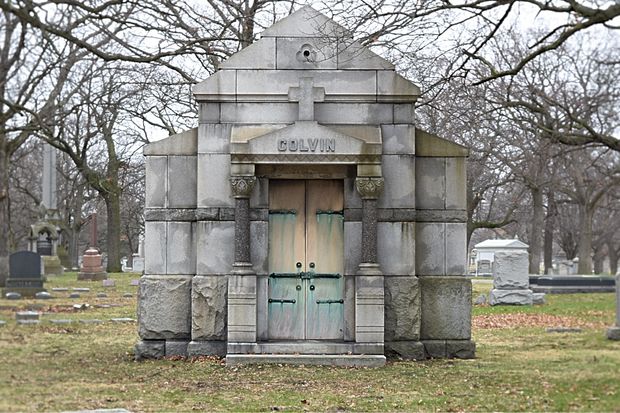 Harvey Doolittle Colvin served as mayor from 1873-75 during the Chicago Fire of 1874, and also repealed a Sunday ban on liquor put in place by his predecessor, Joseph Medill. In 1876, an election was held that did not include the mayor's seat — however schoolteacher and lawyer Thomas Hoyne ran against Doolittle and won, though Doolittle refused to give up his spot and later Hoyne's attempt at mayor was ruled invalid by the courts. 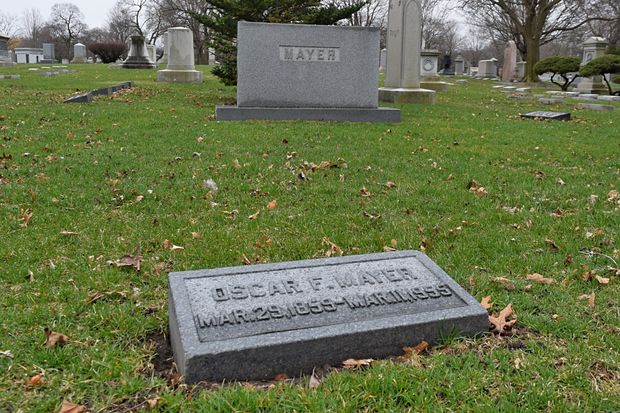 Mayer is buried nex to his wife just behind the Horacio N. May Chapel. [DNAinfo/Linze Rice]

Oscar F. Mayer came to the United States from Germany and would go on to establish a brand and name recognized across America — in particular when sung to a certain tune. At age 24, he branched off from his meat packing job on the North Side to begin a company of his own. In 1893, Mayer's growing company sponsored a German exhibit at the World's Columbian Exposition. 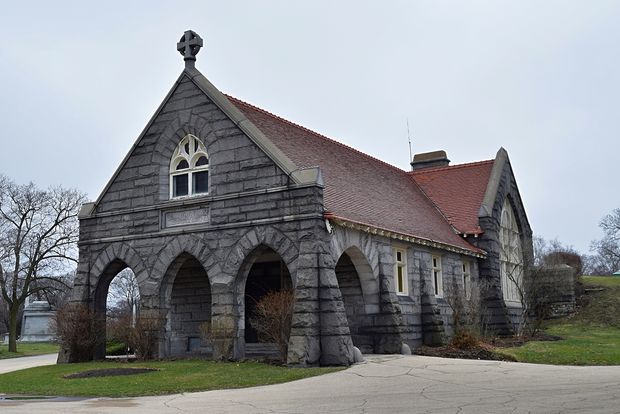 Prior to buriel, bodies used to be stored in a cold area under the chapel. [DNAinfo/Linze Rice]

Horacio N. May was a volunteer firefighter, grocer and politician whose wife created a memorial chapel in his honor that could be enjoyed by all Chicagoans after his death. The couple had used its prominence and wealth to help enrich the city. 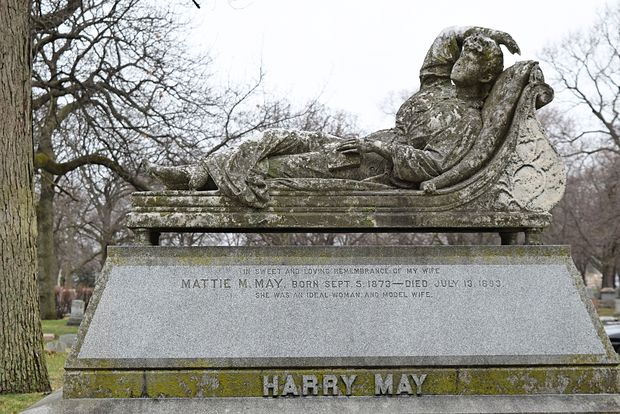 Mattie May died at 19, but the full-size, detailed stone sculpture of her lying down on a couch to read and reflect has fascinated people for more than a century. Her statue was commissioned by her husband, Harry May, who inscribed on her tomb: "In sweet and love remembrance of my wife ... She was an ideal woman and model wife." 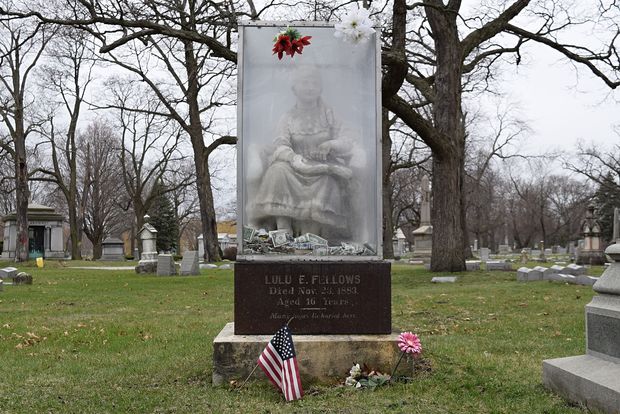 Forever frozen at just 16 year s old, Lulu Fellows is another life cut short. Her tombstone reads: "Many hopes lie buried here." A statue of Fellows, seated in a chair with book-in-hand, is encased in glass and looks on to other members of her family who are buried beside her. She died just over a week after contracting Typhoid Fever and was buried at Rosehill the next day. Small slats at the top of her enclosure may way for visitors to drop in cash and coins. 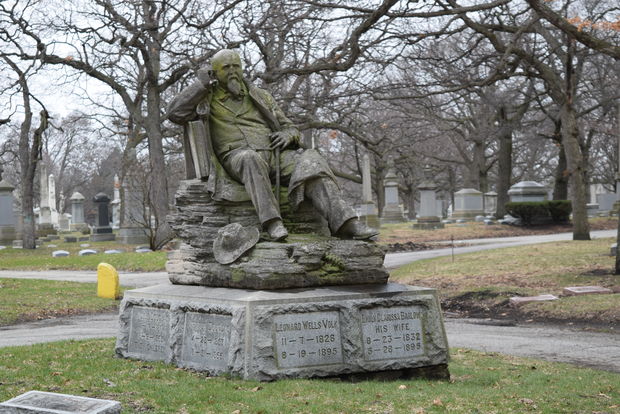 Leonard Volk was an artist who designed and sculpted many of the sites at Rosehill. He helped found the School of the Art Institute of Chicago's predecessor, the Chicago Academy of Design, as well as convinced Abraham Lincoln to sit for a bust and face mask. Statues of Lincoln and Stephen Douglas at the Illinois capital were created by Volk. 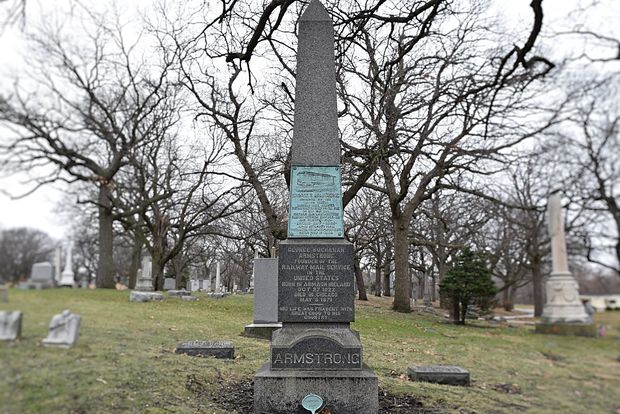 A local school is named after Armstrong. [DNAinfo/Linze Rice]

Today locals may recognize the name George B. Armstrong as the name of a neighborhood school in Rogers Park, but its namesake comes from the man who revolutionized mail delivery himself. Armstrong is considered father of United States Railroad Mail Service and served as a former assistant postmaster in Chicago. 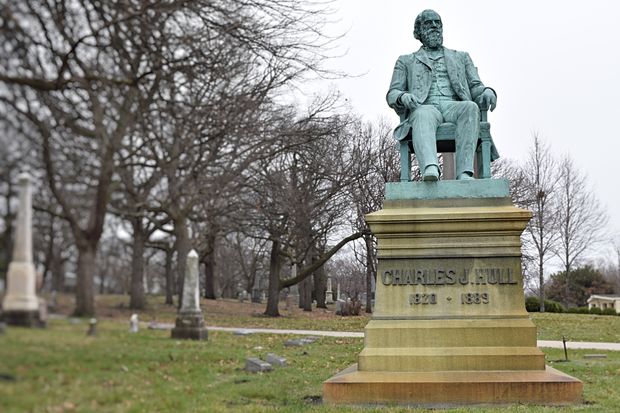 Charles Hull, whose mansion went on to become the Hull House. [DNAinfo/Linze Rice]

Charles Hull was a real estate tycoon in Chicago whose mansion would later become the site of Jane Addams' Hull House settlement, which served as a social agency for people in need across the city. Though some of the Hull settlement has been demolished, the original mansion stands today and has been marked as a city and national landmark. 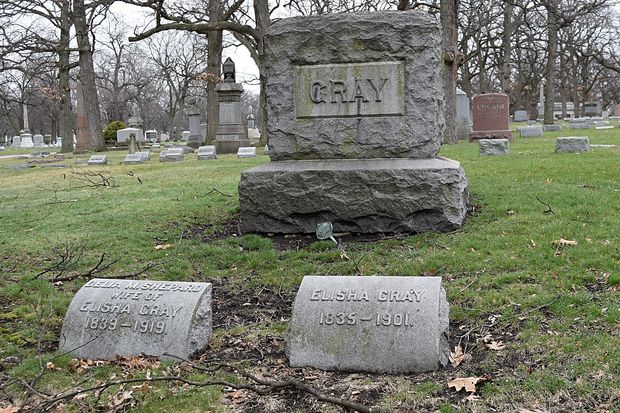 Some historians believe Gray should have been awarded the telephone patent. [DNAinfo/Linze Rice]

Elisha Gray was an engineer and inventor who created the  Western Electric Manufacturing Company, as well as an early prototype for the telephone at the same time Alexander Graham Bell was also competing for the phone patent. Both inventors submitted patents on the same day, though many recent historians have argued that Gray should have been awarded the patent over Bell. The telephone's true inventor, and the conspiracy theories that surround the story, remain controversial today. Gray invented other items, such as a prototype for closed-circuit television, as well as the modern music synthesizer. 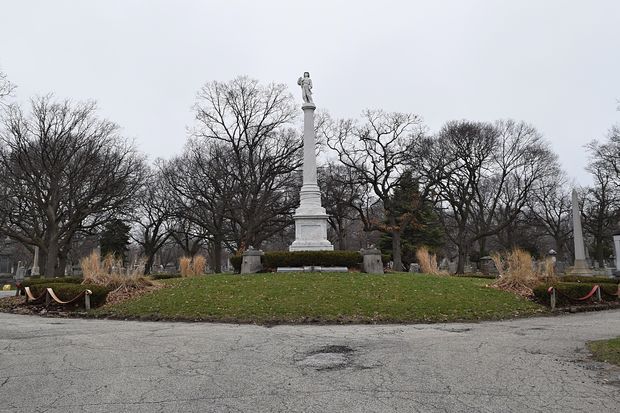 A dedication to firefighters who have served in Chicago. [DNAinfo/Linze Rice]

In 1863 the Chicago Volunteer Firefighters Memorial was erected, and it is designed by Rosehill resident Leonard Volk. Sculptures of firefighter hats and strung fire hoses decorate the memorial, which includes a statue of a fireman atop a tall white pillar that sits in the middle of a circular hill where the memorial is located. 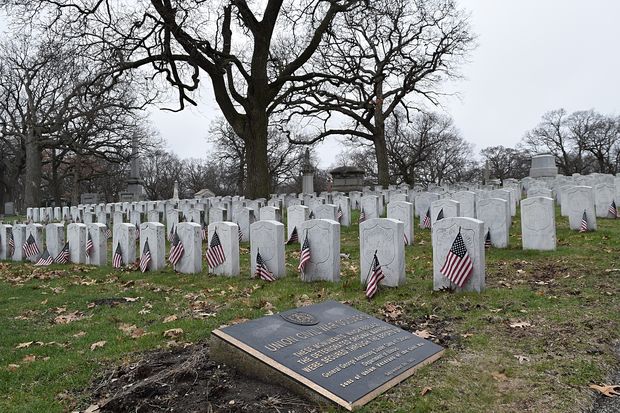 Rosehill has a number of monuments and memorials dating back to the Civil War that honor Union soliders (and three Confederates). The cemetery serves as the final resting place for 14 generals, six drummer boys and hundreds of soldiers from several key battles, including Gettysburg. 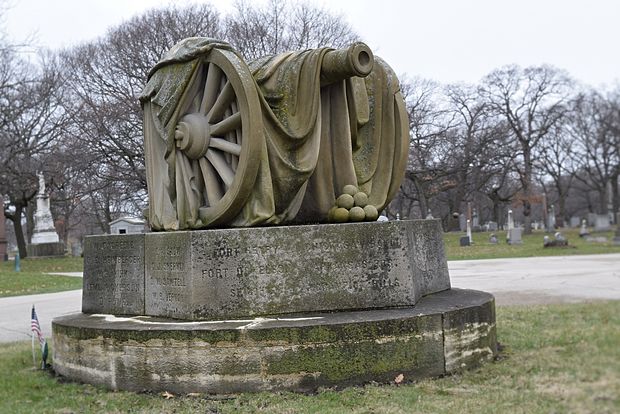 The detailed sculpture of a cannon and flag to honor fallen soliders. [DNAinfo/Linze Rice]

A sculpture of a cannon draped in an American flag honor those who served in Company "A" of the Chicago Light Artillery during the Civil War. Among those who died were some of the first Chicagoans to head out for the war.

See pictures inside Rosehill's mausoleum below. Photos by Linze Rice. 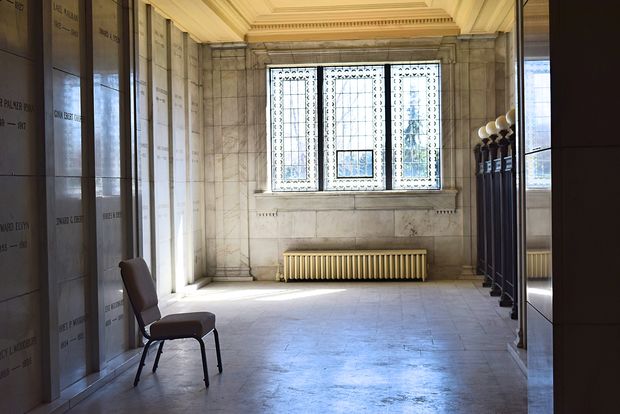 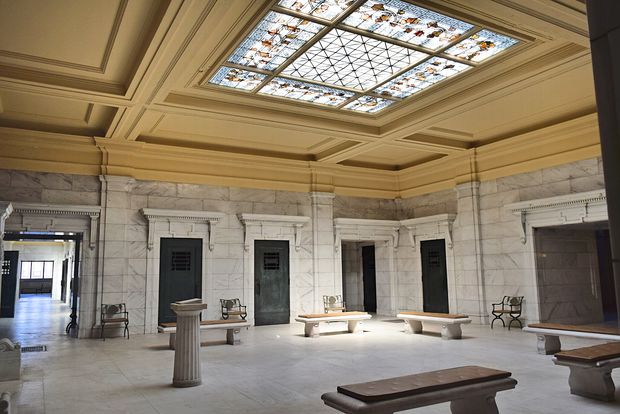 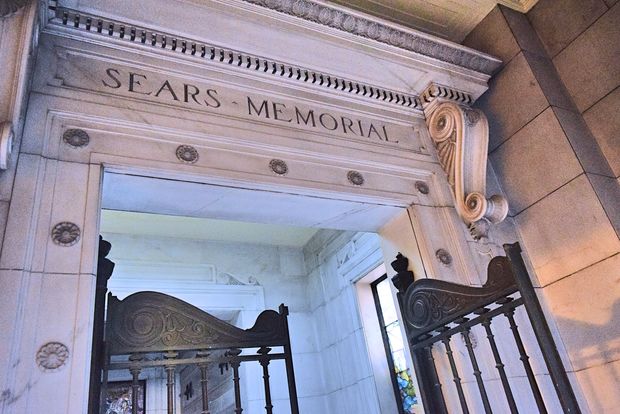 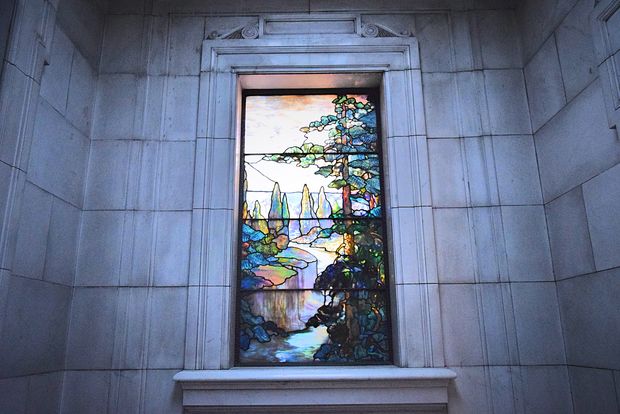 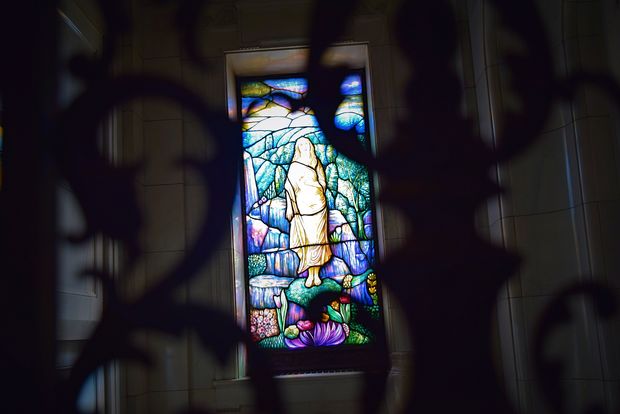 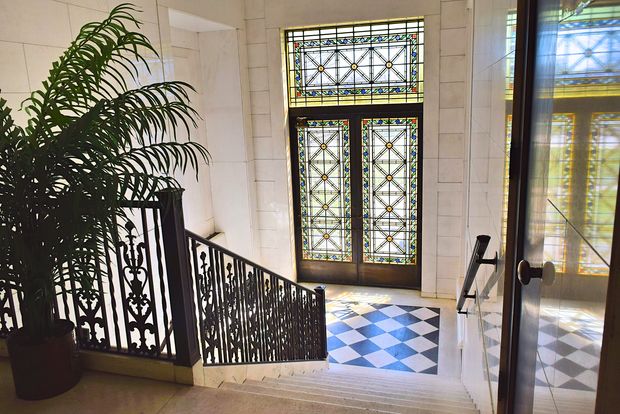 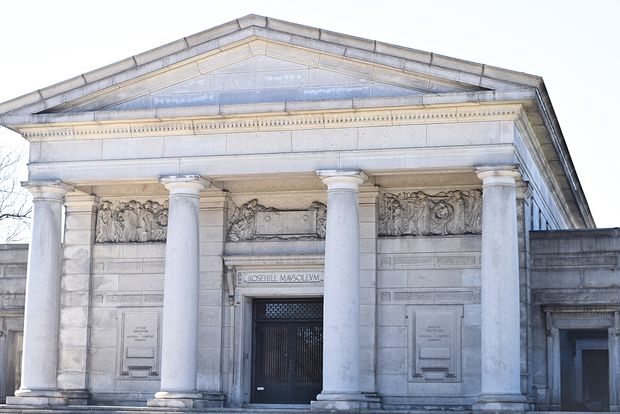 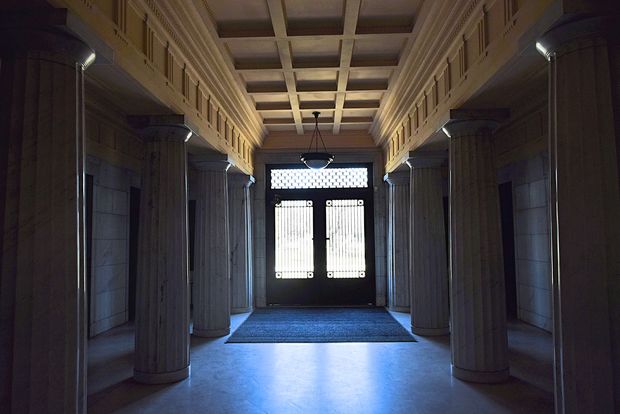 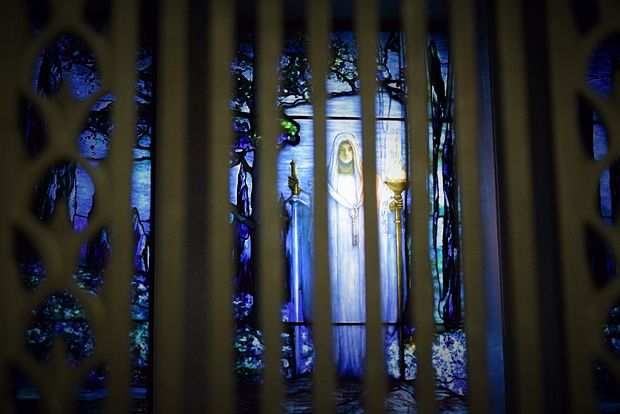 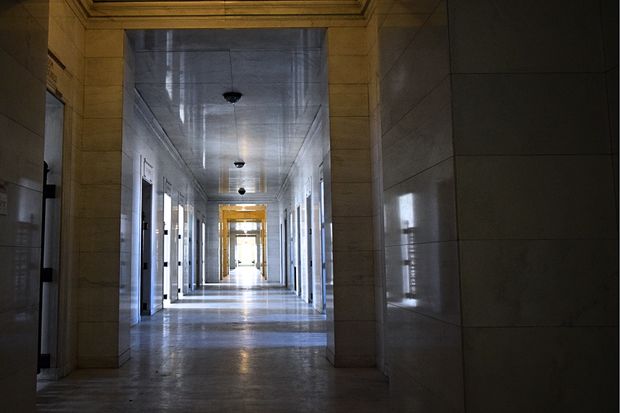