BEVERLY — A large contingent of elementary school students in the Beverly area is wearing red today to raise both money and awareness for Special Olympics Chicago.

Students from 13 schools will participate in Kids Helping Kids Day. The bulk of these students will dress out of their school uniforms today in exchange for a small donation. The goal is to raise upward of $5,000.

The proceeds will be split between Special Olympics and the Mount Greenwood Special Recreation Association, said Maureen O’Malley, a West Beverly resident and organizer of the fundraiser.

The group operating from Mount Greenwood Park works with 115 children and adults, many of whom will participate in the Spring Games for Special Olympics, which began at 8 a.m. Friday at Soldier Field.

"The athletes are so inspiring to me," said O'Malley, whose sister Eileen Guinane works for both Special Olympics and the Chicago Park District.

Most students participating in Kids Helping Kids Day will dress down Friday. They also made posters to hang throughout the park at 3721 W. 111th St., O'Malley said.

O'Malley attended the Polar Plunge March 5 with her sister. She was impressed by the many 19th Ward high school teams jumping into chilly Lake Michigan to raise money for Special Olympics. Ald. Matt O'Shea (19th) coordinated this effort calling it "athletes supporting athletes."

Joseph said he's volunteered with Special Olympics in the past and valued the experience. He and a group of eighth-graders at the Catholic school in West Beverly expect the entire school to participate in the fundraiser today.

O'Malley also called on Beverly's Kerry Ryan Lynch to help with the effort. She is the driving force behind the Choose Kind campaign, which she created to foster wider acceptance after her daughter, Mary Cate, was born with Apert syndrome.

"This is something that is super tangible and real. Plus, I'm all about bringing awareness to differences," Lynch said. 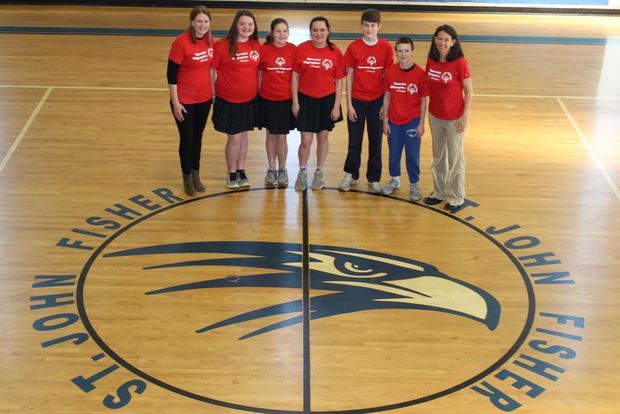 Students at St. John Fisher School in West Beverly are among the participants in Kids Helping Kids Day. Thirteen other nearby schools will also take part in the fundraiser for Special Olympics Chicago and the Mount Greenwood Special Recreation Association. [DNAinfo/Howard A. Ludwig]

Both she and O'Malley hope Kids Helping Kids Day continues to expand both its reach and impact over time, perhaps fostering volunteer opportunities for students. In the future, the day might also help introduce kids to others who come into the world with a unique set of skills and gifts.

Ellen Guinane, also a student at St. John Fisher, said her experience with Special Olympics athletes taught her to not focus on what the athletes cannot do but rather what they can do. The games take the focus away from the athletes' limitations and put the spotlight on their abilities, she said.

"It's just a big ceremony, and everyone is happy because they get to do things that other kids get to do," Keelin said.