MOUNT GREENWOOD — A $300,000 facelift is coming to the north entrance and indoor pool at Brother Rice High School in Mount Greenwood.

The doors facing 99th Street are near the school's gymnasiums and often serve at the main entrance to all-boys Catholic school at 10001 S. Pulaski Road, said Tim O'Connell, Rice's director of admissions.

This entrance will be get a new floor featuring the school's logo, new walls and a new ceiling as well as a video screen informing viewers of school happenings. The hallway leading the the school's pool will also be redone, O'Connell said.

The indoor pool will be renovated as part of the effort as well — the extent of which will be determined based on fundraising, said O'Connell, who added that about 30 percent of the money has already been raised for the project.

"It's going to be a complete facelift," O'Connell said Thursday. 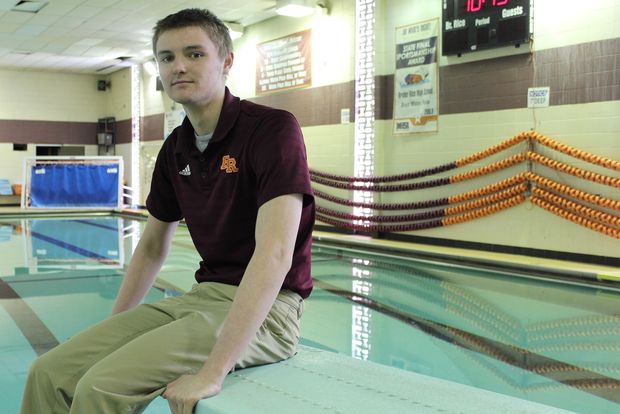 Quinn Russell is a junior at Brother Rice High School and a member of the swimming and water polo teams. The Beverly resident hopes improvements planned for the pool area bring more water polo players and swimmers to the school. [DNAinfo/Howard A. Ludwig]

Potential donors are invited see plans for the refurbished pool at a fundraiser at 7 p.m. Tuesday in the school's corridor that looks out onto the pool. The hallway will be narrowed to make way for seating within the pool area as part of the overhaul.

The former wrestling room on the second floor will also be converted to a seating area, overlooking the pool from above. And new lights, scoreboard, heating and air conditioning system, paint, windows and ceiling are all slated for the pool, O'Connell said.

The project will begin after Rice's summer Boys Camp ends June 23. Work is expected to be done when classes resume in the third week of August. Tthe pool is used by all freshman and sophomores at Rice. 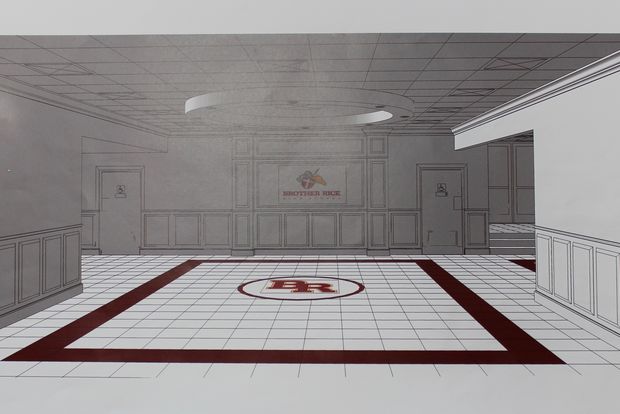 The north entrance to Brother Rice High School will feature the school's logo in the floor, as well as new walls, a ceiling and video screen to broadcast school events. [Supplied Illustration]

It is also used by both the swimming and water polo teams at Rice and neighboring Mother McAuley Liberal Arts High School. Rice's robotics team also uses the pool to practice with its underwater robot.

"Part of the impetus for the project is to make Brother Rice a hub for swimming and water polo on the South Side," O'Connell said.

Quinn Russell, 16, of Beverly is a member of both the swimming and water polo teams at Rice. He said the improvements are much needed in the pool and hopes that a fresh look will draw more students to both teams.

"I think a lot of people underestimate sports like water polo and swimming. It's a lot tougher than it looks, and I like to be challenged," said Quinn, a junior at Rice. 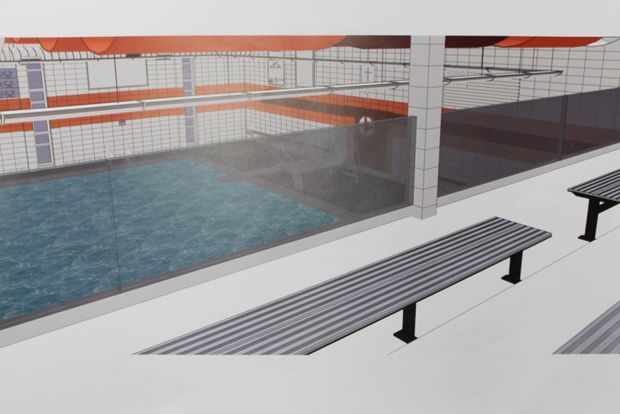 A second-floor viewing area will overlook the pool at Brother Rice High School in Mount Greenwood. The area that will be created for spectators was previously used as the wrestling room. [Supplied Illustration]

The pool will be named for Jim "Moose" Mulcrone, who coached water polo at Rice for more than 30 years. His career included 13 state championships and a record of 724-79. Mulcrone was inducted into the United States Water Polo Hall of Fame in 2004.

"After Fenwick built a new pool, they took over as the powerhouse in water polo," said Frank Mulcrone, who played water polo at Rice.

He is one of Jim Mulcrone's six sons — who all attended Rice. The coach's two daughters also played water polo and went on to earn All-State honors. In fact, Frank Mulcrone played collegiate water polo at Slippery Rock University in Pennsylvania.

Frank Mulcrone said the excitement for water polo is now tempered as most fans at Rice watch the games behind glass windows. So fans can't be heard cheering, the teams isn't heard communicating and even the referee's whistle is often missed.

"It’s like watching the Final Four Championship or the Super Bowl with the mute button pushed," Mulcrone said.