MOUNT GREENWOOD — Mayor Rahm Emanuel on Wednesday broke ground for a new indoor riding barn at the Chicago High School for Agricultural Sciences and touted the locally-produced honey from the Mount Greenwood campus.

Emanuel said his wife, Amy Rule, uses the honey from the school at 3857 W. 111th St. in her tea. His appearance announcing the school's new $1.2 million barn was a good excuse to stock up on the morning staple.

"The truth is, we are out of honey from the Ag School," Emanuel said.

Principal William Hook said the school saved for more than three years to help pay for the 13,000-square-foot horse-riding barn that was approved by city planners Feb. 16. The metal building will be built on the the northwest corner of the school's Mount Greenwood campus.

An illustration of a 13,000-square-foot horse-riding facility at the Chicago High School for Agricultural Sciences in Mount Greenwood gives an idea of how the metal structure will look, according to plans submitted to the Chicago Plan Commission.
View Full Caption
Supplied Illustration

"I don't think I could be more excited or more proud to be here," he said.

Hook said the bulk of the savings came from operating without an assistant principal. Teachers also helped with the belt tightening, adding several students to each class and agreeing to other cost-saving moves.

Ag School students also won $100,000 in an online contest Dec. 10, 2014. The prize was meant to fund a portion of the barn construction and was the impetus for the new facility, Ald. Matt O’Shea (19th) said Wednesday.

"What we have here at the Ag School is not only a wonderful school, but we have dedicated teachers and wonderful students," O'Shea said.

Maggie Kendall, a teacher at the school, applied to be part of the contest through Farmers Insurance's Thank a Million Teachers program. She credited the students, faculty and neighborhood residents for their support.

"I'm glad to see it is finally happening," Kendall said. 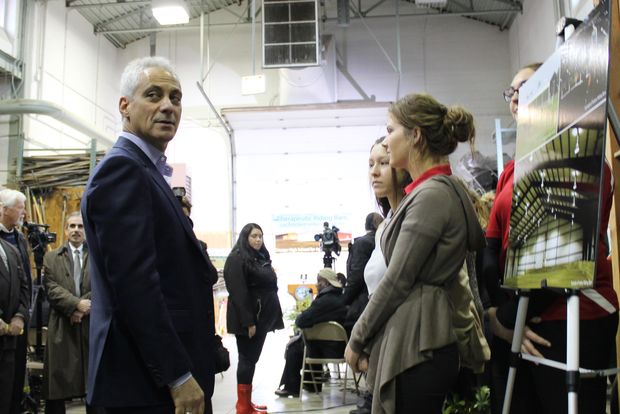 Mayor Rahm Emanuel arrives at the Chicago High School for Agricultural Sciences in Mount Greenwood Wednesday. He touted the school's locally-produced honey ahead of breaking ground on a new indoor riding facility. [DNAinfo/Howard A. Ludwig]

The one-story barn will have a metal roof and will not be more than 25 feet tall, according to plans submitted to the city. It will have two circular riding areas and no seating inside. Students will build some horse stalls on the south end of the building in the future, Hook said.

"My goal is to use this building seven days a week, eight hours a day," said Hook, adding that about six more horses will come to the school once the facility is complete on Aug. 15.

Hook said the barn will be open for local residents as well as athletes participating in Special Olympics Chicago. He also said there's a plan to partner with the Chicago Police Department to offer recreational riding programs for officers as well as Horses For Heroes, which works with returning military veterans. 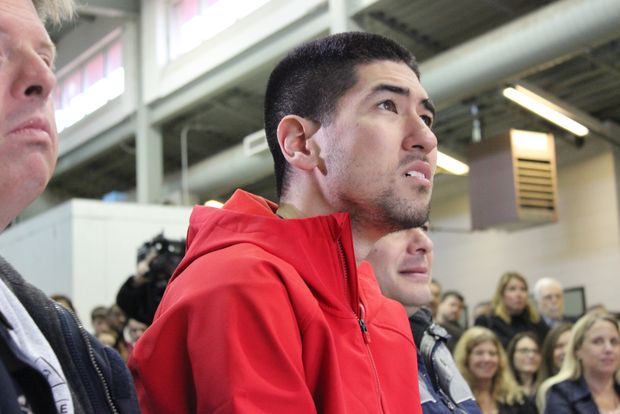 Tommy Shimoda of Mount Greenwood was honored at a ground-breaking ceremony Wednesday at the Chicago High School for Agricultural Sciences in Mount Greenwood. Shimoda, a Mount Greenwood resident, won a gold and bronze medal at the Special Olympics World Winter Games last month. [DNAinfo/Howard A. Ludwig]

Shimoda, a Mount Greenwood resident, won a gold and bronze medal at the Special Olympics World Winter Games last month and received a loud round of applause from the crowd that included students, teachers and several media outlets.

Mulcrone said about a 20 of the 115 participants in her program have worked with horses at the school. Some really take to the animals, either by riding, brushing the animals or cleaning up the barn.