MORGAN PARK — Lauren Paul and Molly Thompson are pretty much the exact opposite of the characters in the movie "Mean Girls."

The college friends founded the Kind Campaign to call attention to ways women and girls hurt each other by spreading rumors, saying mean things, leaving people out and other forms of bullying.

They brought their message to Clissold Elementary School in Morgan Park Tuesday morning and began by asking all 160 girls in the audience to, "Raise your hand if you have ever been negatively affected by something another female said."

Nearly all of the hands went up in the auditorium at 2350 W. 110th Place, which led to the follow-up question, "Have you ever said or done something to negatively affect another female?"

Most of the hands in the audience of girls in fourth through eighth grades remained raised.

"I liked it [the assembly] because it showed you should be nice to someone even if you don't think you need to be," said Trinity Battle, 13, an eighth-grader at Clissold.

Paul and Thompson described their own experiences with bullying in elementary school and high school, including Paul admitting that she considered suicide in the years after her friends turned on her at a party in sixth grade.

"Within minutes it became the cool thing that everyone turn on me," said Paul, who added that the moment had a profound impact on her over the next two years.

"I was so scared to wake up every morning and face those girls, because I did not know what they were going to do next," she said, admitting to that her grades suffered and she also developed an eating disorder as result of the trauma.

The audience was then treated to a showing of a documentary Paul and Thompson shot in 2009. The pair crossed the country speaking with girls and found that all of them had experienced some form of bullying by other girls. 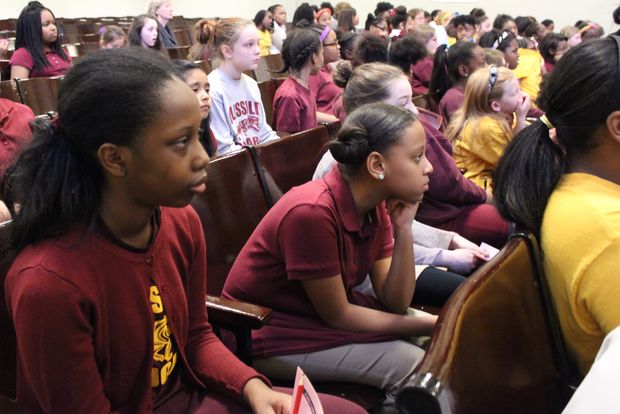 Students at Clissold Elementary School in Morgan Park listen to the founders of the Kind Campaign. The effort aims to thwart bullying among girls. [DNAinfo/Howard A. Ludwig]

The 75-minute film touched on the reasons behind female bullying as well as the long- and short-term effects. It also pointed to the way society often promotes the bullying, and how it can even continue into adulthood.

"This is something that is relevant at any school," Clissold Principal Sean McNichols said.

He lobbied to bring the program to his students. He said Clissold was one of just 350 schools nationwide to be selected to participate and one of 40 schools in Illinois to be included in the campaign.

The event concluded with the girls in the audience pledging to be kind, writing an apology to someone they might have hurt and drafting cards for those friends they appreciate most.

Several students chose to read their cards aloud on stage. One of those readings included a few words of gratitude from one student to several of her friends.

"When two girls made me feel like I had to be prettier, you guys showed me I am," she said.