By Howard Ludwig |&nbspMarch 21, 2017 6:04am
@howardaludwig
Twitter Facebook Email More
Grant Matern, 14, of Beverly is the grandson of Ara Berberian, who sang for 20 years at the Metropolitan Opera in New York. Matern will star as Conrad Birdie in his grade school's performance of "Bye Bye Birdie" April 6-8.
View Full Caption
Supplied Photos

BEVERLY — Grant Matern has landed a lead role in the April 6-8 performance of "Bye Bye Birdie" at Christ the King School in Beverly.

Grant, 14, of Beverly will play Conrad Birdie in the musical set in 1958. The character has more songs than any other performer. But what he really wanted to was the smaller role of Jud Fry in his grade school's 2016 performance of "Oklahoma!"

That's because Grant's late grandfather, Ara Berberian, sang the part of Jud in a 1964 studio recording of "Oklahoma!" alongside Florence Henderson, John Raitt and others. Not that he's complaining about the role of Conrad Birdie, which includes a scene where Grant dresses in a gold jumpsuit.

"Part of me being musically inclined is in my genetics," Grant said Monday.

Indeed, Ara Berberian sang for 20 years at New York's Metropolitan Opera. The warm-voiced bass died Feb. 21, 2005. Just before Berberian died, then nearly 2-year-old Grant Matern sang Happy Birthday to his sister, Miranda, over the phone for his grandfather to hear.

"He said, 'Hey, that kid has pitch and he is going to be a really good singer,'" Grant's mother Suzanne Berberian Matern recalled. She is the middle of Ara and Ginny Berberian's three children.

Her family was raised in Southfield, Mich. Ara Berberian would stay in New York while performing, returning mainly during the opera's summer off-season. But the Armenian singer also performed in San Francisco, Japan and elsewhere. His final performance was "La Boheme" in 1997 in New York.

He died in is sleep at age 74, suffering a heart attack in Boynton Beach, Fla., his daughter said. 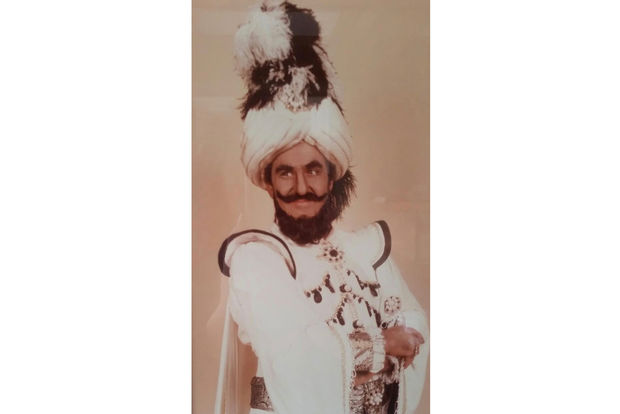 After briefly living in New York after graduating from college, Suzanne Berberian Matern moved to Chicago in December 1993. She met her husband, Terry, and three months later, and they moved to the neighborhood where he was raised on the Far Southwest Side.

"Chicago is nicer, friendlier and cleaner than New York. Plus, I could be closer to home," she said.

She said her father also seemed more at home in Michigan than he did in New York. The family had about 24 acres roughly 15 miles north of Detroit. There, Ara Berberian was most often found wearing overalls and working in the backyard.

A large man at 6-foot-3 and weighing roughly 240 pounds, Ara Berberian arrived with a chainsaw when visiting his daughter and her family in Chicago. He then promptly removed a bush that was obscuring their house.

"He was like a man's man," said Suzanne Berberian Matern, adding that her father also briefly practiced law and played minor league baseball.

As for his grandchildren in Chicago, Grant plans to attend Brother Rice High School in Mount Greenwood in the fall. His sister attends Jones College Prep Downtown. She has also frequently performed in school plays and musicals.

Grant said he'll actually share the role of Conrad Birdie with his classmate. Aidan O'Connor. But he said having friends in the performance simply makes it more fun.

"It's fun to act, especially with all of your friends. Almost all of them do it," he said.