Fallen Firefighter William Grant To Have Street Dedicated In His Honor

By Howard Ludwig |&nbspMarch 20, 2017 7:51am
@howardaludwig
Twitter Facebook Email More
A sign dedicating the intersection of 90th Street and Hoyne Avenue to fallen firefighter William F. Grant will be installed as part of a ceremony at 2:30 p.m. Saturday in Beverly.
View Full Caption
Supplied Photos

BEVERLY — The street outside William Grant's house in Beverly will be dedicated to the fallen firefighter at 2:30 p.m. Saturday.

Grant will be honored with a sign at 90th Street and Hoyne Avenue — a fitting honor for the man who spent his life in the neighborhood and left behind a wife and three children, his brother Tom Grant said.

"Bill was a remarkable guy. He was kind of what you would want to be. He was smart. He was honest. He was very, very personable, " Tom Grant said Friday.

Known as Bill or Billy, Grant died March 23, 2007 at 44 years old. He and a group of Chicago firefighters were responding to an alarm when, according to reports, their fire truck collided with a school bus at 59th and Wells streets.

The impact flipped the fire truck on its side, crushing Grant and injuring three others. The school bus was empty — except for the driver. Grant was the first firefighter killed in the line of duty in seven years.

Grant was the second youngest of Elizabeth "Betty" Grant's eight children. His father also was a firefighter as was one of his brothers. They were all raised in Beverly and members of Christ the King parish.

"He was a good husband and father. It was family and the Fire Department," said Betty Grant. who expects a big crowd Saturday. 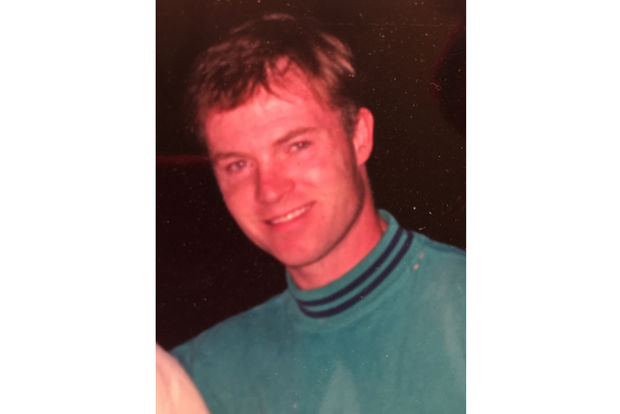 William Grant of Beverly died March 23, 2007. The Chicago firefighter was killed when a school bus collided with his fire truck at 59th and Wells streets. [Supplied Photo]

Grant's daughters, Kristen and Caroline, are now students at Marist High School in Mount Greenwood. His son, Danny, is in seventh grade at nearby Christ the King School.

Tom Grant said he believes the sign will serve as a daily reminder to his nieces and nephews of their father's sacrifice.

"I think that sign is going to be a sign of pride for them," he said, adding that his sister-in-law, Sharon, has done a good job of sharing her late husband's legacy with their children.

Tim Grant, another of Bill's four brothers, said Friday that it's hard to believe that the fatal accident happened nearly a decade ago. He said the funeral was the biggest he's ever seen, stretching around the block.

"He was always looking for the lighter side and for a fun thing to do. He never let anything get him down," Tim Grant said.

Grant was a firefighter for 20 years. He was honored four times by the City Council for acts of bravery, including saving an elderly man from a blaze in 1997 and rescuing a woman from an apartment fire in 2001.

But Tom Grant remembers his brother more for his quick wit and charm. He was known to hire kids in the area, putting them to work on simple chores around his yard.

"He loved being a fireman. He really enjoyed his job," Tom Grant said. "He was great with the neighborhood."