RIVER NORTH — At 60 stories, The Carillon would be the tallest tower built in nearly a decade in River North.

But many neighbors don't want it.

As a winter storm began to swirl outside, a presentation for the ambitious high-rise proposed for 739 N. Wabash Ave. was met with an equally chilly reception Monday night from neighbors concerned about the tower's impact on nearby traffic and views.

Proposed by New York-based Symmetry Property Development, the hotel-and-condominium tower proposed for the northeast corner of Wabash Avenue and Superior Street would be the tallest built in River North since the 98-story Trump International Hotel & Tower opened in 2009 at 401 N. Wabash. A 60-story office tower at 300 N. LaSalle St. also opened that year amid the depths of recession.

The Carillon, designed by Skidmore Owings & Merrill, would include 246 condos, 216 hotel rooms, 120 timeshare units, indoor parking and three floors of retail. If realized, the building would contribute $8.2 million to the city's neighborhood opportunity fund and $5.6 million to the city's affordable housing fund.

But many neighbors who came for a glimpse of the tower Monday were moved more by what was left unsaid: how the tower would impact them.

"This area for traffic right now is almost unbearable as it is," said Nick Kratsios, who lives two blocks from the site. "Building this is not going to make it any better."

RELATED: 60-Story Tower Would Be Tallest Since Recession In River North

Other developers have tried and failed for years to develop the site — a collection of low-slung vintage buildings next to a Giordano's restaurant — because neighbors have aired similar concerns before. At one time the Carillon site was two separate lots two different developers wanted to build on before Ald. Brendan Reilly (42nd) convinced them to work out a deal.

Reilly told the crowd that he spends more time reviewing traffic studies than just about anything else in his ward.

"For all of us here that's where you really feel it," he said. 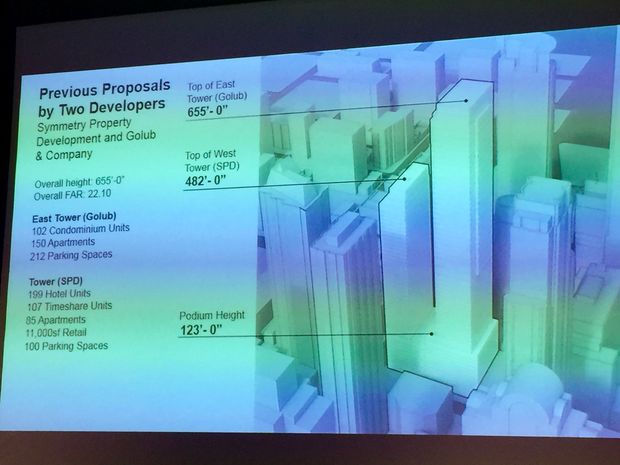 The architect and traffic consultant hired by the developer stressed that shortcomings of prior proposals have been addressed at the Carillon, which would have a parking garage entrance in an alley instead of on a busy street such as Wabash or Superior. The proposal doesn't call for any curbside parking.

"We want to be sensitive to the concerns that were aired quite clearly with the prior proposal," traffic consultant Peter Lemmon of KLOA Inc. said.

But some neighbors were still unconvinced the change would do anything to help.

"This traffic plan is absolutely terrible," said Adam Rod, who lives around the corner from the Carillon site. "That's an accident within one week, for sure." 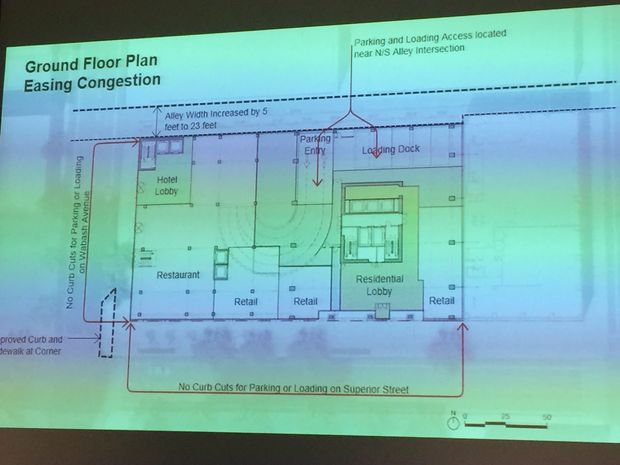 Brian Lee of Skidmore Owings & Merrill said the tower's design is cognizant of its neighbors. The Carillon itself fits between the views out of The Bernardin and The Chicagoan, two towers across the street. The Giordano's next door would remain.

The streets surrounding the tower would stay pedestrian-friendly, and The Carillon itself is topped with a "great arch expressing that rising up, reaching toward the sky," Lee said.

But preservationists are sad that the proposal would call for tearing down three vintage buildings at the corner. Some who came to the meeting would like the buildings to somehow be incorporated into the new tower.

If we’re not careful we’re going to be living in Midtown Manhattan or the Ontario-Ohio feeder, which is really tragic," said Ward Miller of Preservation Chicago. "I just want to encourage you to look at retaining more of the historic fabric of the neighborhood."

Meg George, a Chicago lawyer representing the developer, said the tower would generate 1,000 construction jobs and 372 permanent jobs if built. The developer has yet to file a zoning application with city officials.

The Carillon requires city approval because of its size. But Reilly and others warned that if its proposal is thwarted now, the developer could return with another high-rise that doesn't require a zoning change or other oversight from City Hall.

"There’s a lot they can do here without me," Reilly said. "I just want to throw that caveat out there."