'We All Live Here:' Kids Chalk Up Message At Their School

GOLD COAST — Students at Ogden International School have a message for passersby. In 14 different languages.

Students at the school's Gold Coast campus, 24 W. Walton St., spent their Thursday chalking up the phrase "We all live here" in the 14 different languages that various members of Ogden's student body speak at home.

The chalk drawings surround the school situated near some of Chicago's ritziest shopping strips. And the drawings on Oak Street will be preserved permanently once school officials coat them with a sealer.

Later this spring, fifth-graders at Ogden will hang up self-portraits with various national flags and the word "unity" written in various languages outside the school, too.

"It ties into everything going on right now," said Katrina Cabrera, the school's art teacher. "No matter your race, your sex, your religion, you belong here." 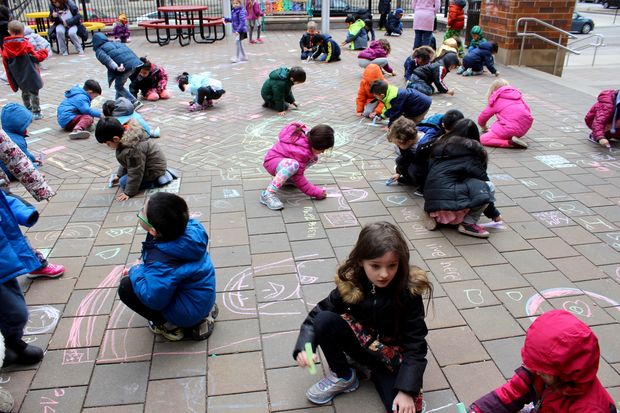 Kindergartners at Ogden chalking up the plaza outside their school. [DNAinfo/David Matthews]

The drawings at Ogden are part of a broader effort by Rich Alapack, 38, a Bucktown resident who left a career in advertising last year to put up "We all live here" pieces at Chicago schools. He's up to 40 now.

"Younger kids, they might have to ask 'what does that mean?' and that might start the conversation," Alapack said. "The thing i’m constantly reminded of is: adults have lost their way. The kids almost have this kind of thought process in their DNA." 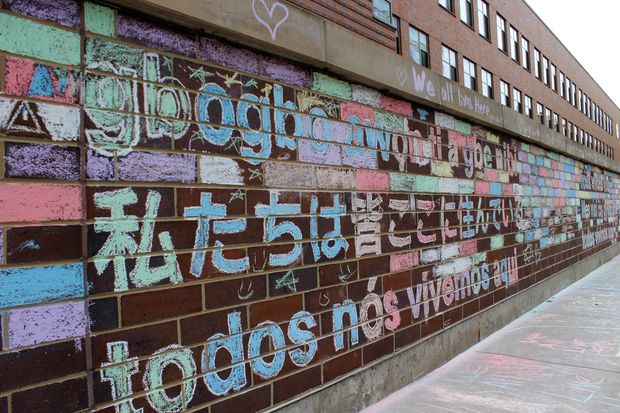 A portion of the wall along Oak Street. [DNAinfo/David Matthews]